Three Bundles of Joy with a Side of Herpes

This is the story about the 3 kittens who stole the heart of a veterinary assistant.

I’d just hung up the phone and my brain was frantically trying to process what had just happened. Would the kittens be OK? And would I be able to stick to the company’s policy of not taking home any stray animals?

The woman on the other end of the phone had sounded hysterical. She’d found 3 tiny kittens in her backyard, who she claimed were near death.

Between the sobbing and ranting, she listed all the reasons she couldn’t keep them; couldn’t take care of them even if she wanted. The two most important ones were that she already had a cat, who was yet to be vaccinated and had just had a baby.

The relief in her voice when I’d told her to drop by our clinic so we could sort it out, together, had been palpable. Deep inside, I already knew what I was going to do and the veterinarians I worked for were not going to like it.

And then she arrived. The 4-week old kittens, miserable as they were, didn’t look to be in immediate danger. Still, they were covered in mucus and pus, squealing frantically and one had what looked like a mini ping pong ball of hardened white goo where her eye was supposed to be. This wasn’t exactly a Kodak moment either.

I looked up to the woman and made her a deal:  “You pay for the consultation and the medications, and I’ll take care of them from there on.”

With a loud “Realllyyy???” she sighed once again in relief and eagerly agreed. After that, I made her promise to check for the mother and get her some help as well. Then, I had a quick word with the veterinarian on duty – who looked at me and shook his head but agreed – and she went in. 20 minutes later, she came out, thanked me profusely and paid her bill. Then she was gone.

The vet was waiting for me with my new sneezing and wheezing furballs in hand, as well as the necessary medication.

“I’d be surprised if they make it, so don’t get your hopes up, but here you go”, he said, and with that, he walked away.

The three kittens had been diagnosed with a severe case of Feline Influenza, caused by the Herpes virus. Their eyes and respiratory system were clearly causing them significant discomfort due to secondary bacterial infections, which had had free reign for far too long. There was no question that their immune system was completely outgunned.

This was going to be an uphill battle.

“Well, that was one obstacle down,” I thought.

Next on the list was informing the boyfriend. Once I got home with my bundles of squealing misery, my boyfriend looked at me wearily. He’d gotten my message, but hadn’t truly believed it till I got home. He wasn’t exactly jumping for joy. He shot me that same look the veterinarian had. I gave him my best puppy face back. He rolled his eyes and said: “Fine, but you’re taking care of them!”

And so, I got to work. While he had sighed at the trouble I’d brought into our lives, my boyfriend was there for me – and for the kittens – to hold them while I went to work.  The first job was to clean out their eyes and noses since they already had had their antibiotics for the day. Crusted with pus and glued shut, I washed them out as gently as I could with sterilized warm water. After that, I diligently applied the strongest eye ointment we had at the clinic.

The last one I treated was the black and white little girl with the ping pong ball on her eye. It took me an hour and a half just to clean out that particular eye but at last, they were all clean, medicated and able to breathe properly again. I fed them, then got them settled into a nice carton box with a comfy blanket for the night.

I was exhausted, but felt strangely exhilarated and yet intensely worried at the same time. In fact, I had never felt so alive and filled with purpose in my life. Miserable as those kittens looked, they were purring happily, with full bellies for the first time in God knows how long in their box. In this moment, they were safe, happy and on the road to recovery.  And that was my doing. Little old me. Who’d’ve thunk?

I looked up at at my boyfriend and smiled, satisfied after a hard evening’s work. He, again, rolled his eyes at me as he tried not to smirk. As I shot the box another contented look, he walked me to my bed for some much needed rest, myself. After all, the real work was just about to start – in four hours, I would have to get up to feed, clean and medicate them all again.

I should’ve felt a weight on my shoulders for all the extra work and drama I had brought home. But I didn’t. And as my head hit the pillow, I felt elated.

Three Bundles of Joy with a Side of Herpes 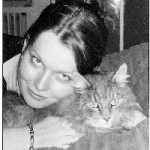 Author’s bio:  Ilse Devriese is a cat behaviorist and former veterinary assistant. She writes at The Feline Perspective about how to see the world through your cat’s eyes and how to optimize your life with your furry roommate. You can follow her on Facebook.