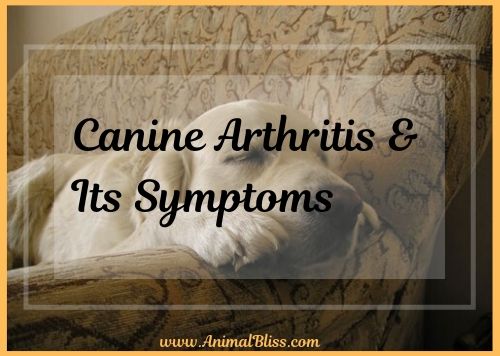 A Guide to Treating Canine Arthritis

Just like humans, dogs often suffer from stiffening of the joints in their senior years, and it is not uncommon for this to develop into canine arthritis. While other factors, such as certain diseases and infections, can also lead to arthritis, the most common cause is simply old age.

About Arthritis in Dogs

Diagnosing canine arthritis, in dogs who cannot describe what they are feeling the way humans can, can seem tricky. However, there are some distinctive signs and symptoms to look for that could show your dog is suffering from the condition. The first sign is usually limping, especially first thing in the morning or cold weather, and a general reluctance to move the affected joint or joints. As time passes and the condition worsens, your dog will become less and less active and may even avoid simple things like jumping on furniture or chasing a favorite toy. Affected limbs may also become noticeably thinner than they were previously and thinner than other, unaffected limbs.

Treating Canine Arthritis and Its Symptoms

Managing arthritis in dogs primarily consists of two lines of treatment. One of these aims to restore and maintain the health of the joint since this is possible. However, as it is not feasible to completely reverse the damage, the second line of treatment is merely symptomatic – aimed at reducing discomfort.

The primary treatment usually administered to dogs with arthritis is the prescription of a non-steroidal anti-inflammatory drug, providing effective relief from pain, and will make a significant and near-immediate improvement in your dog’s symptoms. Never give your dog any painkiller that has not been properly prescribed, especially if it is meant for humans.

See also:
Tramadol for Dogs: What You Need to Know

Your dog may also be given a course of injections of substances belonging to a group called polysulfated glycosaminoglycans. These elements are involved in the production of cartilage, so these injections can help significantly in promoting joint health.

There are many supplements, such as Omega 3 fatty acids, chondroitin, and glucosamine, which are said to help prevent the deterioration of joints. With many of these supplements, there is little evidence to either support or refute claims they help. However, they are unlikely to do any harm if taken properly, so some dog owners decide to use them in the hopes that there will be some benefit for their dog.

While there is a lot that can be done to relieve arthritis, there is no way to fully cure it and the condition worsens over time. As such, it is also worth looking into whether there are any changes you can make to your dog’s lifestyle and environment, such as reducing their need to use stairs, to make them more comfortable.

Does your dog suffer from canine arthritis? What do you do to make him more comfortable?

6 thoughts on “Treating Canine Arthritis and Its Symptoms”