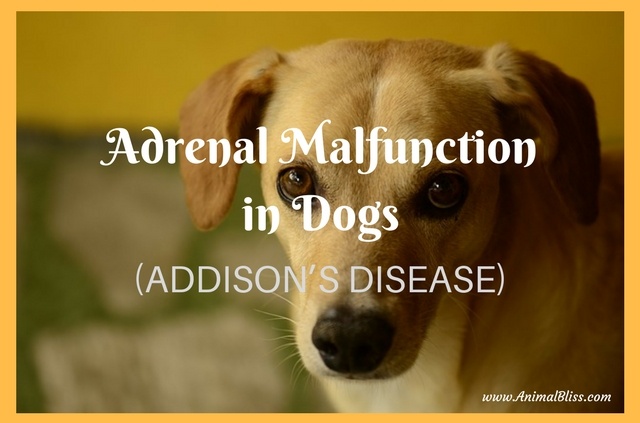 An adrenal malfunction in dogs, also known as Addison’s Disease, can be quite debilitating for your dog, with a set of symptoms that can be quite similar to a lot of other diseases. It’s important to get some background information on Addison’s disease so that if your dog does unfortunately become ill, you can take note of the symptoms and advise your vet with the information they need to know so they can perform the appropriate tests. 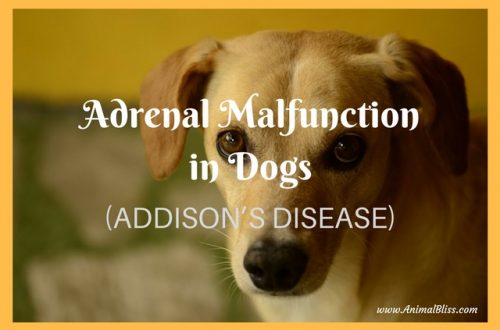 It’s also comforting to have some knowledge on the subject because then you can see where the vet is coming from when they offer treatments, you know what your pet is going through and the reasons behind it while also having a better understanding of the symptoms and how to care for your canine companion.

The Role of the Adrenal Glands

The adrenal glands of a dog function in more or less a similar way to that of humans and other mammals. It produces various hormones such as epinephrine (or adrenaline) and norepinephrine (noradrenaline) to name a couple.

Adrenal glands are found directly on top of the kidneys and are vital for the healthy function of the animal as a whole. They act as part of the endocrine system which features other glands that secrete their hormones and other products into the blood rather than being a duct, like the salivary glands (exocrine system) that secrete to cells in their local area.

When we are considering Adrenal malfunction in dogs, the hormones we are mainly concerned with are called mineralocorticoids and glucocorticoids. They are naturally occurring steroidal hormones which control aspects of an animal’s metabolism and it’s the deficiency of these which cause the symptoms of Addison’s disease.

Due to the disturbances caused by the lack of these essential hormones produced by the adrenal glands, the symptoms reflect metabolic and digestive ailments and their associated effects.

The appearance of these symptoms can vary depending on the duration of the hormonal deficiency and can also vary in intensity between individuals.

Lack of Appetite: Your dog will show a lack of interest in food and may not eat until they are very hungry, this can understandably be quite shocking and worrying to pet owners.

Weight Loss: This can be facilitated by the lack of appetite causing anorexia.

Vomiting: Even when your dog does eat, he can lose vital nutrition through vomiting undigested food.

Diarrhea: Stools can become loose and in severe cases, more liquid in texture.

Dehydration & Increased Thirst: You may find your dog guzzling a lot of water due to the liquids lost through vomiting and diarrhea.

More Frequent Urination: When the dog drinks more water to replace liquids lost, they will want to urinate more, so don’t blame them for accidents.

Lethargy & Depression: The dog will seem lazy and not bothered about anything, spending most of their time lying on the floor, this symptom can be heartbreaking.

You may not see all of these symptoms in your dog; that’s why it is vital to let the vet do the diagnosing but ensure you give them a detailed and accurate account of the symptoms.

There are several causes of Addison’s disease, the first being an inherent deficiency of adrenocorticotropic hormone, tumors or long-term glucocorticoid withdrawals. Take into account that adrenal malfunction in dogs is quite rare in dogs so the vet may look into more likely causes of these symptoms first.

Other than our accounts of the symptoms, your vet will run a series of tests to get an idea of the issue at hand.

A dog with Addison’s may present a high number of eosinophils and an increase in lymphocytes in a blood test, both of which are white blood cells. Anemia is also present.

With the blood serum, it’s possible that excreted waste products are present as well as high potassium levels. Low sodium and chloride levels, as well as high calcium and an increase of enzymes produced by the liver (ALT and AST), may also be found.

The urine can be found to be dilute in comparison to normal and is coupled with low sodium and chloride levels from a serum analysis can be quite telling.

The pituitary gland produces a hormone called adrenocorticotropic hormone or ACTH which interacts with the adrenal glands; it stimulates the adrenal gland to release its own hormones. The vet would usually inject your pooch with ACTH and test how the adrenal glands respond to detect if there are any issues.

The ACTH Response Test is usually the best test to indicate an adrenal malfunction in dogs but still may not conclude Addison’s on its own. However, one can see if there is a deficiency of the adrenal hormones related to Addison’s.

Treatment for Addison’s in Dogs

Sometimes dogs can come down with a severe episode which is usually marked by collapse and spasms, make sure you get your dog to the vet as soon as possible as they will need hospitalization and fluid replacement.

It’s a shame to say that there is no definitive cure for Addison’s disease and your dog will probably require hormone replacement therapy for the rest of its life. The vet will prescribe your beloved pet with the dosage dependent on their size and needs.

After they have recovered from their first round of treatment your vet will probably require you to visit at particular intervals; usually every few weeks, (depending on the severity and progression of the disease) for hormone replacement injections and to monitor response to treatment.

Guest Writer: Carl Mclean is a dog owner, wildlife enthusiast, and blogger. You can find his other works on AnimalMentor.

Has your dog dealt with Addison’s Disease?