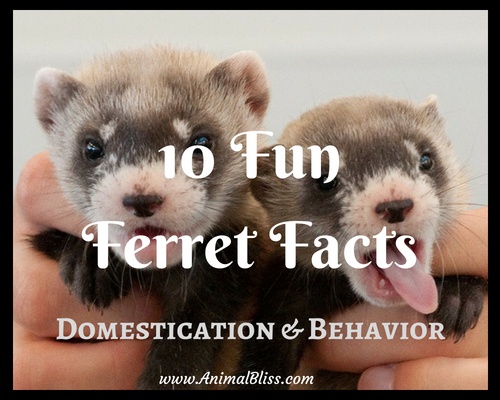 Ferrets are exotic pets which can steal your heart in a minute. Once you get to know them, you will see that there are plenty of reasons to have them as pets. I have gathered ten fun ferret facts to help you get acquainted with them and to find out why they make such good pets.

The ferret’s domestication started 2,500 years ago, around the Mediterranean Sea in Europe. (That is one of 3 main theories.) One of the first written documents about ferrets is from Balearic Island where rabbits were out of control. Ferrets were Lybian animals bred for hunting rabbits. The ferrets would run down the rabbit tunnels and chases the rabbits out. That is the same technique people use today to hunt rabbits with ferrets in some countries such as the UK.

Before ferrets were introduced as pets, they were working animals. Ferrets hunted rabbits, mice, rats, and other pests that were destroying crops. In the era of industrialization, ferrets got the more important task to enter narrow spaces, like pipes for wires and cables, and pull the cables on one side. There is a story that ferrets helped run TV cables for broadcasting Prince Charles and Lady Di’s wedding. This task wasn’t a problem to ferrets because of their love to go in the tunnels. (Tunnels are one of the most popular toys for an owner to buy their ferrets.)

Since pet ferrets were domesticated 2,500 years ago, they can no longer survive on their own in the wild. They do have a wild cousin, however, in North America: a black-footed ferret. A black-footed ferret is an endangered animal which almost went extinct in the 1900s. Today, their number is improving, but they are still on the endangered list.

A domesticated ferret has a Latin name “Mustela putorius furo,” which you can translate as little thief and hunter. That name the ferret well because they love to stash belongings like keys, slippers, gloves — anything they find interesting. Many ferret owners can find their pet’s stashes behind closets or under beds during spring cleaning.

Most people assume that ferrets are rodents, probably because of the size and shape of their bodies, but that can’t be further from the truth. Ferrets belong to the mustelid family along with otters, weasels, and stoats.

The best nutrition for ferrets consists of raw meat, bones, and organs; mostly from rodents such as rats and mice. The ferret digestive system is very fast, which makes them unable to process fibers; and that is why meat is the best for them. Besides raw food, pet ferrets can also eat specially-made, quality ferret or cat kibble.

RELATED:
How to Care for Your Ferret – Pet Ferret Care Guide

Ferrets can easily adapt to your way of life. Ferrets sleep most of the day (18-20 hours) and are most active in the morning and the evening. Ferrets can sleep so deeply that they may appear dead. That is called “Dead Ferret Sleep.” Many new ferret owners have rushed to pet hospitals, thinking their ferret was dead; and then, suddenly, the ferret woke up.

Big sleepers like ferrets have high energy levels when they are awake. When a ferret owner is playing with a ferret, a ferret can get so excited it can start jumping around and running into things. That is called a “ferret war dance, “ and it is an interesting ferret behavior.

Ferrets are mostly silent animals, although they will produce sound when excited or scared. A sound of excitement is a clucking sound called “dooking,” and when they are scared, they will “hiss” like a snake. But, don’t think that ferrets aren’t loud. When a ferret is playing it will chase a ball, jump on things, play in plastic bags and those aren’t silent actions at all.

I hope you have enjoyed reading these 10 fun ferret facts!

RELATED:
How to Get Rid of Your Ferret’s Odor 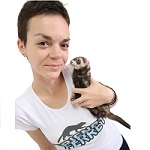 Author Bio: Anja has a website about ferrets called Friendly Ferret. On her website, she writes tips and tricks for living with ferrets as pets. You can also read more about her and her two ferrets, Frida and Yoda, and her daily adventures with them. You can check out Anja’s Friendly Ferret Facebook Page and Instagram.

Do you have ferrets? Tell us about them.

Disclosure: Animal Bliss is an Amazon. com affiliate and will earn a (very small, teeny tiny) commission from purchases made through links on this website.

1 thought on “10 Fun Ferret Facts – Their Domestication and Behavior”