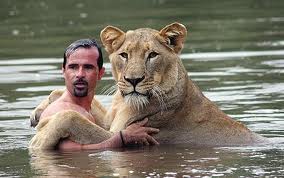 In this beautiful film, Kevin Richardson talks about his passion for African lions and Hyenas.  He talks about the future of the African Lions and why they might be the new endangered species.

After graduating with a BSc in Anatomy and Physiology, Kevin began his career in postoperative rehabilitation. He made a dramatic career switch when he was given an opportunity to work with lions at a local lion park, sixteen years ago.

As a self-taught animal behaviorist, he has broken every safety rule known to man when working with these wild animals. Flouting common misconceptions that breaking an animal’s spirit with sticks and chains is the best way to subdue them, he uses love, understanding, and trust to develop personal bonds with them. His unique method of getting to know their individual personalities, what makes each of them angry, happy, upset, or irritated-just like a mother understands a child-has caused them to accept him like one of their own into their fold.

Kevin’s unique relationships with these large predators have opened many doors and captivated the imagination of many people throughout the world.  He has presented and produced several documentaries that detail his relationships with the animals and highlight the plight of lions both in captivity and in the wild.

Kevin has also written a book appropriately named, “Part of the Pride” detailing his work over the years with the large carnivores and is now affectionately known by his fans worldwide as “The Lion Whisperer”.

Through his remarkable relationships with the animals, he has also made a name for himself in the feature film industry as one of South Africa’s leading animal handlers and advisors.

He has been featured prominently as a result of his groundbreaking work on many local and international News Networks, Newspapers, Magazine and Actuality Programs including Sky News, CNN, ABC News, NBC, CBS, Carte Blanche, and Top Billing.

His most ambitious project to date was that of a full-length dramatic feature film called “white lion”, whereby he fulfilled the role as both producer and lion wrangler. The film took over four years to make and is about the life of a young white lion, “Letsatsi” who survives against all the odds to become an adult and find a pride of his own.

The Kevin Richardson Wildlife Sanctuary’s mission is to provide a self-sustaining African carnivore sanctuary for the purposes of wild species preservation through education, awareness, and funding, especially pertaining to the rapid decline of large carnivores in Africa due to habitat loss, human-predator conflict, unscrupulous hunting, disease, and their illegal trade.

* Leave a comment below and let us know you were here *