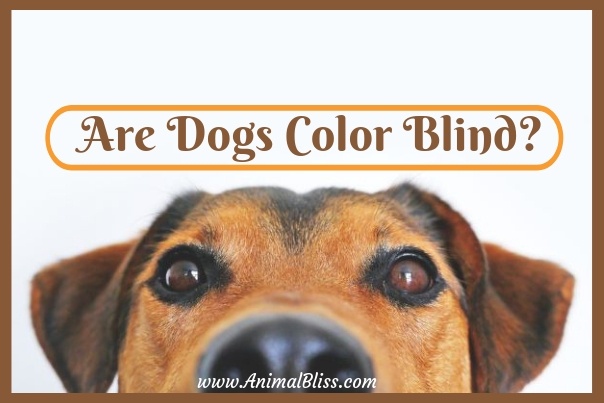 I think every dog owner has – at some time or another – wondered, are dogs color blind?. I know I have. So, I decided to do some research to satisfy my curiosity about this subject and have found out some very interesting things.

So, are dogs color blind?

No, they are not, in that they can see more than just black, white and shades of grey, which is what a true color blind human will see. Dogs are not color blind; rather they are color deficient. Their color range is far more limited than the human spectrum.

Very simply put, your dog sees a field of mostly yellow, blue and violet. They do not see reds, greens, and orange.

In both human and canine eyes, there are two types of photoreceptors called rods and cones. Human eyes contain more cones, while a dog’s eyes have more rods. Neither do dog’s eyes have a fovea, which is responsible for the sharp detail humans see.

Because of this, dogs have superior night vision and can track better than humans. However, they see fewer colors and shapes, with objects having much less detail than a human would see.

So, while throwing an orange ball onto green grass will appear as yellow on yellow, it is your dog’s acute motion- detection skills that get him running after it.

Who found this out?

A lifelong dog lover, writer, and founder of National Dog Week, Will Judy, came up with the idea that dogs had poor vision and could only see single shades and tones. He also claimed that they could only see general outlines and shapes.

Back in 1937, Judy believed that dogs were totally color blind, being able to see only shades of black and grey. However, in the 1960s other research showed that dogs are not indeed color blind but spectrum-challenged.

Scientists studied the canine retina and compared this to the human retina. The retina is composed of millions of light-sensing cells.

What makes the difference between human eyes and canine eyes is the composition of the cones. Most humans are trichromatic, which means they have three types of cones. Dogs are known as dichromatic, and only have two types of cone.

The three different cones register a different light wavelength, which means that humans can see the full-color spectrum, and dogs can only see two-thirds of it. Your dog is missing the red and green cones.

RELATED:
Cloudy Eyes in Dogs: Is it Cataracts or Something Else?

How does this affect my dog?

Your dog was born that way, and he is used to seeing things in other shades, although it may explain why he does not always notice his yellow ball when you throw it onto the grass, especially if it is not right in front of him.

Color deficiency does not hurt your dog; neither does it make him unhappy that he can’t differentiate between your brand new shoes and other pairs when he chews one.

So, what colors does my dog see?

Studies have shown that dogs see fewer colors than we do, but they still see some of them.

Instead of seeing the rainbow of colors than humans see, your pooch will see dark blue, light blue, grey, light yellow, darker yellow and very dark grey. So, your dog understands his world as yellow, blue and grey.

All the green, yellow, and orange colors appear as yellowish, while blue/green is seen as grey.

I have found it very peculiar that so many dog toys are made in red! This is one color that dogs don’t see very well. It will appear as very dark brown or even black. So, the bright red toy that you love because of the color is not that visible to your dog, and that may be why he chooses another toy instead.

What this also means is that sometimes your dog may simply not see the toy that you have thrown because it blends in with the grass or floor. He may merely run past it or not see it. He’s not stupid. He genuinely didn’t see it.

Guest Writer: Valerie Holyoak, I am the owner of Bentley, a Clumberdoodle, and I also write articles for OfficiallyPets (See BIO below)

What dog breed do you have? 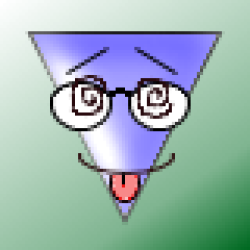 Valerie Holyoak
Valerie Holyoak has a three-year-old Clumberdoodle named Bentley, who is the light of her life. In Valerie’s my spare she writes about him and other dogs at OfficiallyPets.com.