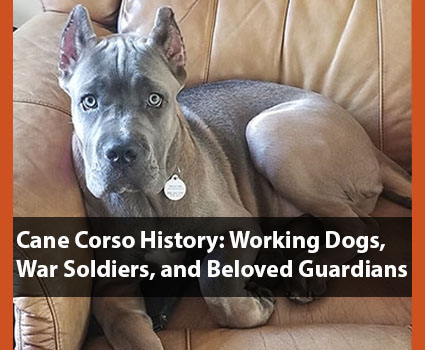 They say if you want to know a particular dog breed, you should take a look at its history, and the Cane Corso breed history is one of the richest that spans thousands of years. Known as the most easily trainable of the mastiff family, these noble guardians currently hold their ranking proudly as the AKC’s (American Kennel Club) 40th popular dog breed in the United States.

The Cane Corso wasn’t always as prized and admired in this country. In fact, these dogs had quite the humble-yet-noble beginning, and at one point, Cane Corsos were all but extinct and hardly known in the United States at all.

The Cane Corso’s Relationship to Molossers

The name of the Cane Corso comes from a Latin phrase that directly translates to “bodyguard dog.“ Molossers were a type of working breed that was bred specifically for working canines on the Greek Islands. It is believed that the molossers were brought to the mainland of Italy where they were bred with native dogs in the area. The Cane Corso is the result of these breed pairings that happened all those years ago, which explains why the Corso is so eager to work to achieve tasks for their handlers.

The original Cane Corso has origins that reach all the way back to the first century. Canis Pugnax (Roman war dogs), were expertly trained to act in battle alongside their human handlers. The Roman Army was notable for being one of the most efficient to use dogs in combat. Decked out in spiked collars and spiked braces around their ankles, these dogs charged in droves into enemy lines to give soldiers on foot or horseback a head start. It is also suspected that these dogs were used in Roman arenas to fight against massive wild animals.

The Cane Corso as a Civilian Working Breed

Once the Roman Empire collapsed, the dogs that had been serving soldiers in war stepped into roles in civilian settings. The Cane Corso could be spotted all along southern Italian countrysides as it helped patrol farms, herd livestock, and protect vineyards. These dogs were known to be so loyal to their owners that they gained a reputation for being gentle enough to play with a small child yet protective in such a manner that it would fight to its end to defend that child from a proposed threat.

The Near Extinction & Comeback of the Cane Corso

Unfortunately, when the rural farms of southern Italy started to fall apart in the early part of the 20th century, the need for the Corso dwindled, and this dog breed became quite rare—so rare that the breed was hardly known at all in the United States. According to the AKC, it wasn’t until a group of Cane Corso enthusiasts began working to bring back the breed in the latter part of the 1970s that the Corso population started to grow.

In 1994, the Italian Kennel Club (ENCI) saw the breed established enough to list it as the 14th true Italian dog breed, and the very first Cane Corso was imported from Italy to America in 1988. In 2010, The AKC finally recognized the Cane Corso as a breed.

These days, the Cane Corso has made its way into the homes and lives of people across the planet. These guardian canines that boast a ferocious, intimidating stance and a keen eye for suspicious activity also offer a mild-mannered temperament that makes them a beloved family pet. 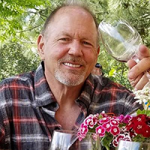