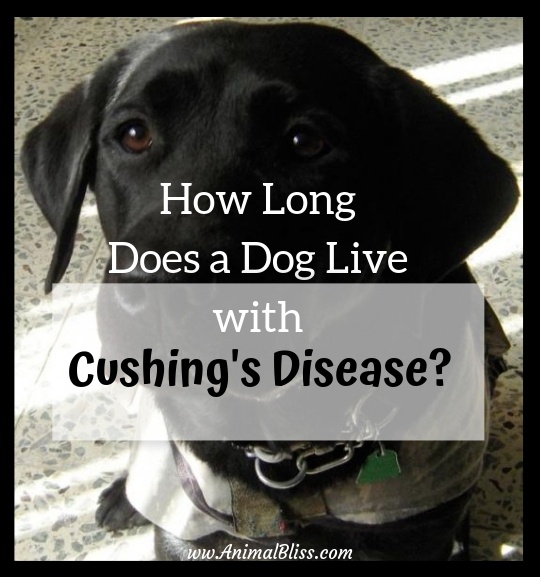 Hyperadrenocorticism (HAC), commonly referred to as Cushing’s disease is a condition in which your dog’s adrenal glands produce excess hormones, most of which is cortisol. This hormone, if produced in excess, will affect several bodily functions; hence the symptoms might present themselves in a wide range.

Cushing’s disease is incurable, but even then, your dog still has a chance to live a long and happy life. For any pet parent wondering how long their furry friend will live with the disease, that will depend on factors like when the disease was diagnosed, the choice of treatment, and others.

Before answering your question, however, it would be nice to shed light on some basics about the condition.

Which dogs are most affected?

Three main factors lead to Cushing’s syndrome, but all are related to excess production of cortisol:

Since the Cushing’s disease is more common in older dogs, most owners mistake its symptoms for old age and only realize that something is not right when symptoms worsen. Late diagnosis means that chances are reduced of your dog living long.

Watch out for the following symptoms, and ask your vet to check your dog for assurance if noted:

RELATED:
Giardia in Dogs, What are the Symptoms and Treatment?

Back to the main question, how long does a dog live with Cushing’s disease?

This answer to this question will vary depending on various factors. One such element is the origin of the condition. If it began in the adrenal gland, you should expect your pooch to live with the disease for an average of three more years. On the other hand, if your dog has a pituitary gland issue, he will most likely be alive for an estimated period of two years with the disease.

In most cases, dogs that are quite young when the disease is diagnosed have a chance of living longer. It is also good you know that health issues like diabetes and some forms of infection can lower the life expectancy of your pooch if they are suffering from Cushing’s disease.

Sometimes, the condition of your dog may deteriorate not so long after treatment has commenced, in which case you might want to consider putting your dog to sleep after closely monitoring the progress.

If all you are wondering is how long does a dog live with Cushing’s disease, then you will have to consider factors like age, choice of treatment, the stage in which the disease was diagnosed, among others. If, however, the condition is treated early enough, your dog can recover and remain healthy for years and will, in most cases, live out his normal lifespan.

“How Long Does a Dog Live with Cushing’s Disease?”

What dog diseases has your dog experienced?

5 thoughts on “How Long Does a Dog Live with Cushing’s Disease?”