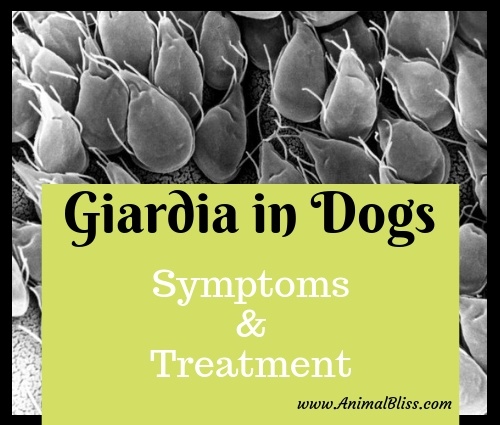 Giardia in dogs is one of the most common protozoal diseases in canines. Giardia symptoms are diagnosed through infections in the feces of infected dogs. Giardia symptoms require repeated fecal sample examination of dogs to detect their presence.

Giardia is a one-celled protozoan parasite which lives in the intestine of the infected animal. There are cysts (one form of giardia) formed in polluted water and fecal matter and once discharged in the animal’s body; these cysts release tiny pear-shaped creatures called trophozoites.

Trophozoites (another form of giardia) continue to multiply in the dog’s body. Trophozoites, in healthy dogs, live for years in the lower portion of their digestive tracts.

RELATED:
4 Signs it’s Time to Take Your Pet to the Vet


Common Symptoms of Giardia in Dogs

In the early stages, the giardia infestation is not detectable because the dog doesn’t show any symptoms. Giardia also remains inactive for many days. Also, it takes a long period to detect their presence after the activation and multiplication phase has begun.

Since Giardiasis affects the intestine and digestive tract, diarrhea is the most common symptom. Giardia symptoms in dogs begin with diarrhea and vomiting. Hence, other reasons such as Salmonella and Campylobacter are not considered in the diagnostic tests of Giardiasis.

Despite that the protozoan prevails in the small intestine, mucus from the large intestine confirms the presence of giardia. Peculiarities such as an increase in the number of white cells and traces of anemia in the blood tests are important Giardia symptoms in dogs.

Giardiasis at a later stage can produce grayish and fatty feces and obstruct the normal absorption and digestion of food. Thus, it is probable that there is no decrease in the appetite of the dog, but a significant reduction in its weight is a common symptom of giardia infestation.

Estimating every stool for the number of cysts for a continuous period of 3-6 months is another way to ensure if Giardiasis infects the dog. However, it is not widely used since it is a costly approach to identify Giardia symptoms in dogs.

Giardiasis is an undetectable disease, commonly found in the canine community. The determination of the infected percentage considers the above-given symptoms and is not specific because of two significant reasons:

1) Giardia in dogs varies largely, depending on the region and its sanitary conditions.

Giardiasis spreads very easily through water and food.  Therefore, pet owners need to follow hygienic practices such as washing their hands after handling the dog waste. Diarrhea being one of the common symptoms of Giardia in dogs, puppies have to be kept away from canines having diarrhea.

RELATED:
What Every Dog Owner Needs to Know about Parvovirus

Treatment of Giardia in Dogs

In the event you see signs of giardia symptoms in your dogs (diarrhea), consulting a vet is recommended. Medications, such as Metronidazole, can be used to treat Giardia infections.

“Giardia in Dogs, What are the Symptoms and Treatment?”

Has your dog suffered from Giardia or Parvovirus Disease?

3 thoughts on “Giardia in Dogs, What are the Symptoms and Treatment?”