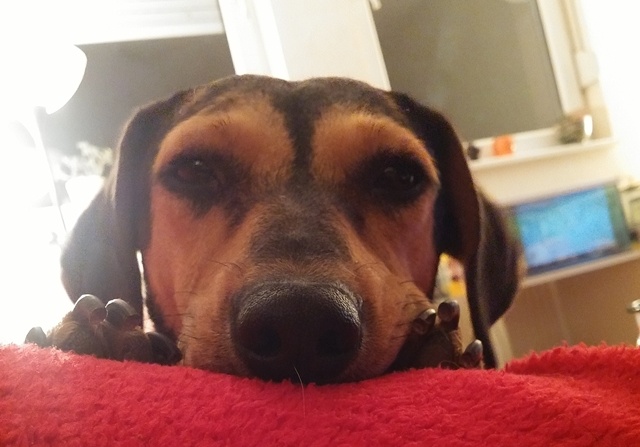 Pretty and me: Our Rescue Story

Once upon a time, there was a pet-less me, and that pet-less me was a pretty lonely, cheerless creature who always worried about work, cash, health, and other everyday things that come with living on one’s own but still don’t make a house a happy home. Then one rainy day, she came and turned my life around in a few blinks of her huge puppy eyes, and transformed my semi-D into a hotbed of love, joy, and pride. I often say that I rescued her – but to be honest, sometimes I think that it was she who rescued and adopted me as her human. 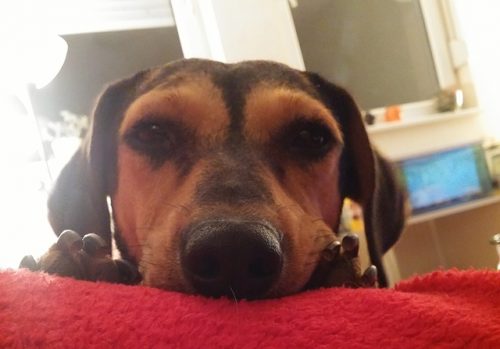 Pretty wasn’t much to look at – she was just your average stray dog, underweight, shying away from humans, and she had a bad limp, a result of having spent weeks fending for herself out on the street. She marched into my life on a depressing December day, just before Christmas; in a way, she was a belated gift I always longed for as a kid but never managed to coax out of my parents.

I was returning home from work, drained by all the mail I had to go over and reply to back at the office, and just as I was driving up the parking lot, something little and furry caught my eye in the rear view mirror. A dog, shivering with cold, so skinny I could count her ribs from a few feet away, was hiding behind the back tire of a neighboring car, trying to get away but failing at it. Slamming the door behind me, I lingered for a second: the animal could be ill, rabid, or aggressive, and I didn’t want to get either of us in trouble. 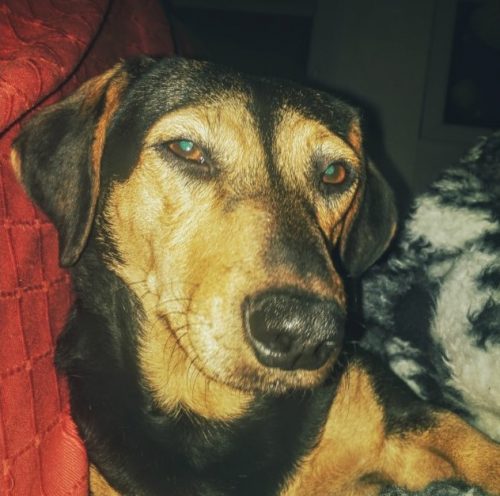 Then her eyes met mine. She has the loveliest eyes in the whole world – but back then, her eyes were filled with terror mixed with a deep longing. That one hit home, hard. Her ambivalent gaze reminded me of someone I knew well. I’d being seeing that look in the mirror for an entire lifetime. I paused, then crouched at some distance from her. She was still looking at me, unsure whether to run or to stay. I don’t remember what words I said, but she stopped shivering and sent me a curious look. I continued talking, and her tail gave a brief wag, then went wild. I distinctly remember saying ”Come, come here, pretty girl, I won’t hurt you” – and to my surprise, she did.

At that point, I knew she was a keeper, and I decided to name her Pretty.

They say that rescued dogs love their owners more than those who never came face to face with human cruelty. I couldn’t agree more. You see, unlike people, animals are authentic: they expect little and give all they have to those they love, no scheming, no manipulation, no false pretenses or bargaining attached. Pretty was as hungry for selfless love as I was, and I think that’s why fate decided to bring us together. 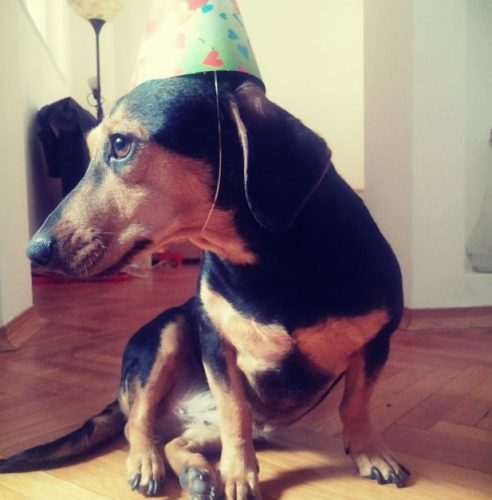 I’d seen my share of the dark sides of human nature to last me a few lifetimes in the years leading up to our encounter, and acts of selfishness and carelessness by my fellow humans scarred me deeper than I’d like to admit. But as soon as I brought Pretty into my house, something little, warm, and fuzzy began to grow inside me – call it hope, renewed faith, or the roots of a lifelong companionship if you will, but there it was.

She was all wet and cold from the rain, so I grabbed a towel and wrapped her in it, rubbing her fur gently and whispering into her ear. That calmed her down, and she slowly began to explore her new home as I fumbled around the kitchen trying to make her dinner. I knew next to nothing about dog nutrition, but I figured beef and cheese would be a real treat for a half-starved canine.

As she nomed on what was probably the first decent meal she’d had in months, I went online and started my research on how to care for a rescued animal. She’d need a warm place to sleep, and a bowl – no, two bowls at least; and yes, a collar, with her name and my contact details on it. Squeaky toys, grooming gear, crates, leashes, harnesses, and dozens of comfort-design dog beds flashed before my eyes as I browsed the web: the sheer amount of dog essentials sent my head spinning. “We go shopping first thing in the morning,” I said to her and got an appreciative look and a wagging tail in response. 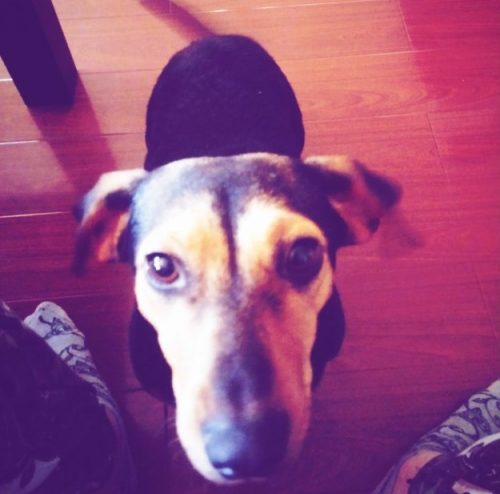 As weeks went by, that little something fuzzy in me grew stronger, like the magical bean stalk from that fairy tale. The vet told me she’d probably been abused by humans because she was fearful and nervous around strangers. Her hind leg had sustained an injury a few days before we met, and it took the vet a while to calm her down and inspect the wound. After administering core vaccines, he bandaged her leg, and instructed me to change the dressings every evening. Now, that was easier said than done! At first, Pretty kept looking at the bandage as if it was an alien; she sniffed it, then sneezed loudly. She tried to get it off, but gave up after a few attempts.

Soon enough, Pretty grew a soul-deep affection for her new body part and gave a long, heart-wrenching squeal every time I had to swap the bandage. After a few days, though, she got used to it, and sometimes it seemed she was actually looking forward to dressing swaps: I laughed my heart out looking at her walking around with her new bandage like the queen of the red carpet: “See, me’s pretty, and me’s got this brand new white thingie on my leg, and it’s making me even prettier,” the proud look in her eyes said.

Over the years, we’ve had dozens of adventures: we’ve adopted a kitten at Pretty’s urging – she actually tried to smuggle her furry friend from the street into the house without me noticing, and she even managed to hide her behind the bed. When I discovered the little feline intruder, Pretty put on her saddest puppy gaze – that girl really knows how to tug at your heart and get her way! I couldn’t say No to her – to them both, in fact, they both looked so cute trying to cajole me into the family expansion. So, now we’re a happy household of three, and Psycho is every bit the opposite of Pretty, but they get along like they’ve been hatched out of the same egg – they even share the bed, though Psycho usually takes up more space than Pretty. 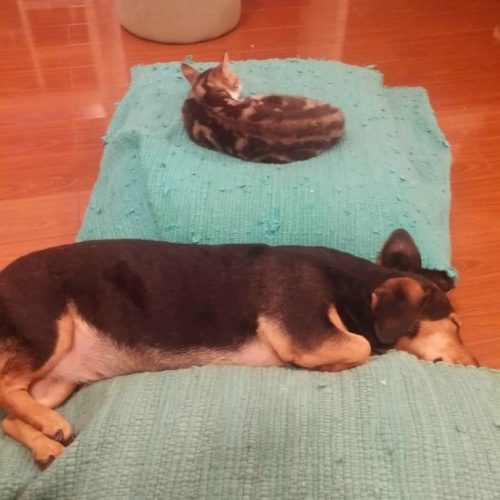 We visit the vet regularly for checkups (they’ve had all their shots by now), we love to make late-night frozen snacks together, and sometimes the cat joins us for a walk around the block. With them around, I’ve got all the love I always longed for, and those two know just how to make the dullest of days much brighter and far more meaningful than I could’ve ever hoped for. We’re not just friends: our bonds are those of a family, and I’m grateful for the day I spotted that little timid ball of fur hiding behind the tire.

My life has changed since the rescue, and for the better too: I think that Pretty and Psycho would agree with me on that one. My message to all of you who’re reading this is: sometimes life throws you lemons, but sometimes it can throw you a blessing in a furry guise. Don’t just keep walking the next time you see a stray animal on the street – an adopted pet is a lifeboat of a kind, and it will be a ray of sunshine on the gloomiest and rainiest of days. By rescuing a defenseless being, you’ll actually be rescuing yourself: try it; you’ll understand what I’m talking about before long. 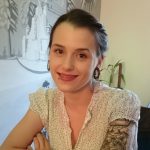 Guest Writer Bio: Elise Morgan is a health and fitness fanatic who adores hiking, long bicycle rides, paragliding and all sorts of extreme sports, after all, she did spend hundreds of hours in the air. She has 8 pets and she loves writing about them, health, adventure and experiences.

A QUESTION FOR YOU: Do you have a pet rescue story? We’d love to hear about it.

3 thoughts on “Pretty and Me: Our Rescue Story”