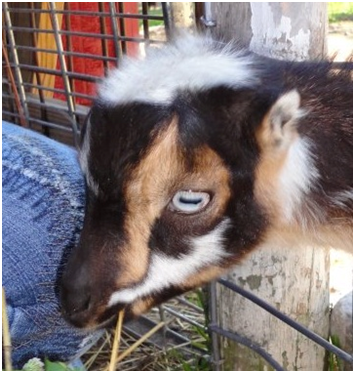 The Life of Frankie the Baby Goat

Frankie was undoubtedly the cutest goat I’d ever seen. He was half-Nigerian Dwarf and half-LaMancha, which meant he was small like Dwarf, but had those tiny ears like the LaMancha. He was essentially a calico goat, with patterns of black, brown, tan, and white all over his body. To top it off, his eyes were blue. Elise, the head wrangler, named him Frankie for his blue eyes after Frank Sinatra, but in my mind, he was Frankie Muniz, who matched our goat Elijah (Wood) who was all black with blue eyes. They shared a father, actually.

I came down to see him a few minutes after Elise called me to tell me he had arrived. I was sad to discover that I missed all the action his arrival had brought. She had put him in with the sheep and alpaca, thinking they would be kinder to him than big old Toby and the other goats. But the sheep snapped at the sight of something smaller than them and attacked. Bandit got excited and was running in circles on the outside of the fence, vainly attempting to herd them. Dream, the alpaca, was also panicking and spitting and screaming.

Eventually, Elise was able to catch the poor baby goat and put him in with the other goats. The other four Dwarfs took some offense to him, but big old Toby decided instantly that he was not worth the effort. So, Elise put a good pile of hay in the goat’s shelter for Toby and Frankie, and the two were quite content there.

It was near the end of April, and the little goat was only 8 weeks old. I had scooped him up and held onto him while Elise and I came up with his name and talked about other things. He probably only weighed about 15 pounds at the time, and was the size of a big house cat. And what a sweet little creature he was! He rested his head on my arm and was perfectly content to be held.

Related: Rubbing Noses with the Animals, A Lesson Learned

As soon as summer hit, Frankie became a hit with all of the summer camp kids. Because he was still smaller than the other goats but growing up, the other goats became increasingly mean to him. This angered a lot of the campers, and allowed for great conversations about how they bully others with their words, and how their counselors feel when they’re bullying the other campers.

He was also sweet and loved to be around people, so I was able to let him out to be with the kids. Even when they didn’t have grain for him, he would stay near them just for the sake of being near him. The day-campers, many of whom came back every week during the summer, loved picking up and holding him, and he tolerated this rough-handling with an ever calm demeanor.

Truly, he was the ideal petting farm goat, and everybody loved him.

Tragedy struck just two weeks before the end of summer. Over the weekend, Elise noticed Frankie seemed to be walking strangely, but didn’t think too much of it. By Monday, he could barely stand and had lost his appetite. After spending the morning propping him up and encouraging him to nibble on grass, Elise took him to the vet.

The diagnosis was unclear, and we began to carefully monitor little Frankie, keeping him in the barn with us at all times. I was able to use my vet tech training to give him fluids under the skin to keep him hydrated, as well as injections of the vitamins and antibiotics the vet gave us.

But, by Wednesday evening, he wasn’t looking too good. I checked on him that night after chapel, and he greeted me with a gleam in his eyes and a quiet cry of greeting. He had been silent most of the day, which was abnormal for him. He seemed perky, and there was a ray of hope.

Related: 4 Types Of Miniature Goats You Would Want As A Pet

I stood him up, and he both urinated and defecated for me, which he seemed to have been struggling with before. He even tried to take a step, but I let him just rest. I put him back on his bed of hay and offered him the fresh alfalfa the vet had brought, and he started picking at it. I bid him goodnight and spread the word among the wranglers that it looked like he would pull through.

But, he was awful the next morning. My fellow wrangler Kerri and I spent a significant part of the morning with him, but it became clear to me that he wouldn’t make it when he lost the ability to hold his head upright. His heartbeat had become slow and erratic. I stopped giving the fluids, wrapped him in the blankets, and gave him to Kerri.

She held him close, and he died a couple minutes later.

We found a box for him, determined to give him a proper burial. Out to the pasture we went, shovels in hand. We found a nice spot under a tree and dug a deep hole for our little friend that had brought so much joy to so many people, even in his short life. After lunch, the Wranglers and Jr. Wranglers gathered for a funeral and a prayer.

Although it seemed a little silly to be crying over a goat, he had entered our hearts as quietly as he left the world, and made a lasting impact on all of us. It was the joy he brought that we remembered, the excitement of every kid that got to pet him, and the unity it brought even among staff who were able to agree that Frankie was the sweetest little goat we’d ever have, even if they couldn’t agree on whether the alpaca was vain or shy.

It just goes to show you that you never know how an animal is going to touch your heart.

*** The day-camp referred to in this story is the Wildwood Ranch, which offers significant, life-changing and highly regarded summer programs each summer for children between the ages of 4 and 17. The day-camp is owned and operated by Detroit Rescue Mission Ministries.

Are you as crazy about goats as I am?