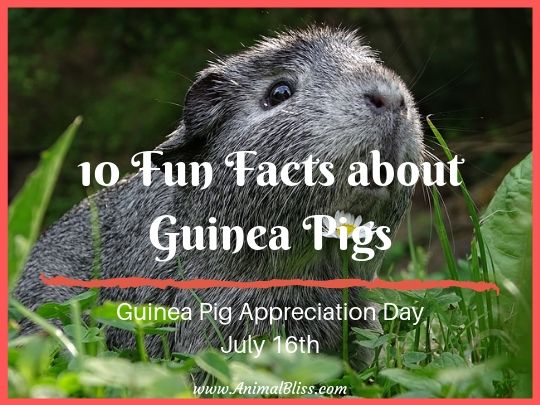 In celebration of Guinea Pig Appreciation Day today, July 16th, we will share with you 10 fun facts about guinea pigs that you may find interesting. Enjoy!

1. It is estimated that 2% of UK households own a Guinea Pig.

2. Guinea Pigs have 20 teeth. The very prominent incisors that we all see are premolars and molars. The teeth are hidden by a Guinea Pig’s fatty cheeks, which make them very hard to see.

3. Two of the most common Guinea Pig insurance claims seen by ExoticDirect are for dental problems, such as overgrown teeth that can lead to dental deformities, pain, and difficulty eating. Other claims are for gastric issues such as GI (or gut) stasis, which is when a guinea pig’s gut stops contracting and moving. The cause of GI stasis is often caused by a lack of fiber found in hay and grass in the diet.

4. A baby Guinea Pig is called a pup.

5. Like humans, Guinea Pigs can’t produce their own vitamin C. It needs to be supplied to them in their diet. Insufficient vitamin C will lead to the piggy developing Scurvy.

Related:
How to Care for Your Guinea Pig: Getting to Know Your Pet

6. Guinea pigs eat their own poo. Well, the caecotrophs anyway. These are their soft droppings, and they’re full of goodness from their high fiber diet. They also produce a hard dropping which they don’t eat.

8. The best temperature for Guinea Pigs is between 18 to 23 degrees Celsius (65 to 75 degrees Fahrenheit. Too hot, and your piggy could get heatstroke, and too cold and it can get chilled.

9. Guinea Pigs shouldn’t eat cut grass, as this can begin to ferment very quickly, giving your piggy an upset tummy.

10. Guinea Pigs are very fertile, and if a male is left with multiple females, he will mate with them all. Back in 2014, a male Guinea Pig impregnated 100 females at Hatton Adventure World in Warwick, after ending up in the female enclosure.