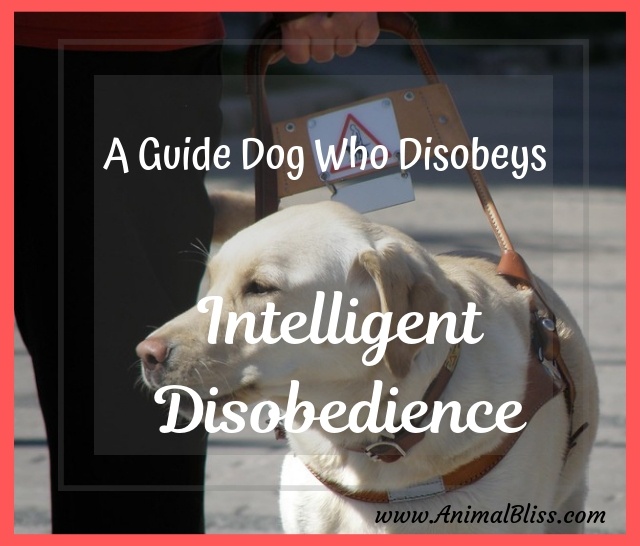 The Seeing Eye, Inc. in Morristown, New Jersey, is an organization that trains German Shepherd Dogs, Golden Retrievers, and Labrador Retrievers, as well as the occasional Standard Poodle, for service work as guide dogs for the visually impaired. While extremely intelligent, Standard Poodles are only used on special occasions for a person with allergic reactions to pet dander. Poodles do not always possess the concept of Intelligent Disobedience, which is why the breed is not utilized more often for guide work.

What is Intelligent Disobedience?

Intelligent Disobedience is a dog’s ability to make a judgment call. While the word “disobedience” produces a negative image of a guide dog who ignores his handler’s commands, adding the word “intelligent” brings disobedience to a higher level. While starting as something negative, disobedience transforms into something remarkable and highly sought after in guide dogs and other types of service dogs. The dog’s judgment calls are part of the team working together to reach their destination safely.

Also known as “Selective Disobedience,” the trait is observed when a dog willingly disobeys his handler’s command because it is not safe to do so. Intelligent Disobedience does not occur naturally in a dog’s mind. The concept must be taught through consistent training. However, the ability to understand Intelligent Disobedience is most prevalent in German Shepherds, Golden Retrievers, and Labrador Retrievers. Standard Poodles can learn the concept, but not as quickly. Hence the reason Standard Poodles are only used on occasion for dander allergies and are selectively trained.

Intelligent Disobedience, AKA Selective Disobedience, is the trait observed when a guide dog willingly disobeys his handler’s command because it is not safe to do so. Click To Tweet

How is Intelligent Disobedience used?

Guide dogs learn to use Intelligent Disobedience in critical situations where the dog’s sense of safety tells him to disobey a command until the path is clear. Here are a couple examples for reference.

Let’s say a guide dog and his handler are standing at a street corner. They are planning to walk through the crosswalk to the other side of the street. The handler listens for traffic and then gives the “Forward” command. The guide dog, following his months of intense training, turns his head left and right to check for traffic coming from either direction. He spots a car approaching from the right so, he does not step forward into the street, despite the Forward command. The car drives past and, the guide dog confidently steps forward. The team briskly walks through the crosswalk and onto the opposite sidewalk. The dog’s handler praises him vigorously with a scratch of the ears and a “Good boy!”

The guide dog used his Intelligent Disobedience to keep his handler safe from oncoming traffic. A visually impaired person may not be able to hear an approaching car. Background noise can cloud the sound of an engine. And with the rise of electric motors in vehicles, an oncoming vehicle can be difficult for nearly anyone to hear.

In another scenario, a visually impaired person and their guide dog are walking through a park. The dog stops walking and refuses to move forward. “Forward!” says the handler. The guide dog pulls to the left and continues onward. Traffic cones and caution tape were blocking the path on which the team was walking. The guide dog leads his handler through the grass, around the obstacle, and back onto the path. Once they are back on track, the handler pats his guide on the back and praises him with an excited “Good boy!”

The guide dog understood that his handler would not be able to navigate the cones and caution tape. So instead of continuing forward, he intelligently maneuvered his handler around the obstacle in a safe manner and back onto the planned path.

Overall, people with visual impairments rely on their guide dog’s Intelligent Disobedience skills to keep them safe amongst vehicle traffic, foot traffic, and other obstacles. A handler’s path needs to be free and clear of anything that could trip the person or bump them in the head. The guide dog’s job is to be aware of all surroundings – even those far above his head – and navigate his handler in a safe direction. This process involves a lot of Intelligent Disobedience.

How is Intelligent Disobedience trained?

For example, the trainer asks the dog to walk down a sidewalk with low-hanging branches. As the dog walks under them, the trainer slaps the branches and says “Ouch!” The dog suddenly looks up and realizes there was an obstacle above his line of vision. The trainer then tells the dog to move around the low-hanging branches through a clear path. That’s a learning moment! With consistency and repetition, the dog learns to watch for obstacles as high as his handler’s head, not just at a dog’s height. As the guide dog understands the simple situations, the trainer introduces him to more complex cases, such as watching for traffic on a busy street corner.

Intelligent Disobedience is learned in various situations with the use of gentle correction and redirection to a proper solution. The dogs endure a wide variety of scenarios where they would need to guide their handler. The trainers show the dogs how to think about the solutions to the problems they face actively. Through this complex and intense training, the guide dogs learn an invaluable skill that saves numerous lives from vehicle accidents.

Throughout the United States, approximately 500,000 service dogs are helping people and saving lives. At least 10,000 of those service dogs are guide dogs for the visually impaired. Click To Tweet

What is the benefit of Intelligent Disobedience?

Not only do guide dogs save lives but they also provide freedom and happiness to people who were formerly limited in their mobility. Handlers of guide dogs also gain a best friend to go on adventures with throughout the rest of their lives.

Intelligent Disobedience is an invaluable skill found in German Shepherd Dogs, Golden Retrievers, Labrador Retrievers, and some Standard Poodles. Professional trainers teach this skill through problem-solving and real-life situations. Guide dogs at The Seeing Eye and other guide dog organizations learn to lead their handlers down safe paths free of obstacles. Despite the negative connotation of “disobedience,” the skill saves lives as dogs protect their handlers from oncoming traffic.

“A Guide Dog Who Disobeys: A Highly Sought-After Skill” 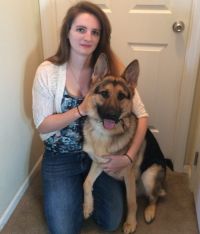 Guest Writer: Kelly Siedhof is from Pennsylvania and works as a freelance editor and writer, specializing in the canine training industry. Her experience with dogs began at age 2 when her family began raising guide dogs for the Seeing Eye, Inc. After earning a Bachelor of Arts in English from West Chester University, Kelly was inspired to start her own business as a writer and continue her passion for pups by writing articles for K9deb.com.

Have you heard of Intelligent Disobedience?