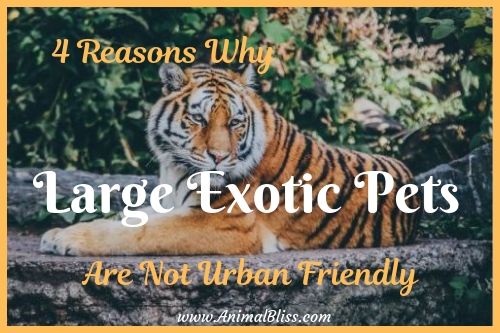 At first glance, the idea of having a pet tiger or crocodile sounds pretty neat. These animals are unique, majestic, and popular pets in many states. The reality of owning exotic pets is much different than the fantasy, however. Even in areas where they’re legal, large exotic pets create a lot of issues and don’t do well in urban areas. If you’re thinking about getting a large exotic pet, here are four reasons to reconsider.

Large animals need large enclosures, and urban areas lack the space. You can’t keep a large alligator in a wading pool and expect him to be happy. Even pet parrots, who aren’t often considered exotic, need four to six hours of flight time a day. Sadly, however, very few get it, and an estimated 50 percent live in cages that are too small for them.

Animals adapt to the climates they live in and function best in those places. A pet bear living in the south, for instance, might struggle when the continuous warm weather disturbs his winter hibernation instincts. Large snakes and reptiles imported from tropical rain forests need high levels of humidity that can be difficult to maintain in a home enclosure without significant investments. Desert animals may have the opposite problem, finding your home too humid.

It’s hard to duplicate another climate, and many exotic pet owners do so poorly and at the expense of their pets.

Domesticating a wild animal is a slow process that happens over many generations. Animals that are taken from the wild and raised by humans never become genuinely tame. A wild animal has natural instincts that can clash when forced to conform to living with humans. If cornered or upset, they may lash out, and even their idea of friendly play can be too rough for humans to handle.

Even if you’re willing to take the risk, do your friends and neighbors feel the same? You’re liable for any injuries your pets may cause, including if they manage to escape their enclosure. If you did at any point take on a sizable exotic pet, it would be essential to speak with a personal injury lawyer about what the law requires of you in terms of keeping your pet secure and preventing unnecessary risk through interactions with your neighbors and home visitors.

Related:
Most Endangered Wildlife in Every U.S. State

As mentioned, wild animals aren’t wired to live in a way that conforms with human expectations and lifestyles. While dogs and cats have adapted well to cohabitation, other wild predators have specific needs for mental stimulation that can often only be provided by prowling in a wilderness environment. When kept as pets, exotic animals often exhibit neurotic behavior such as excessive grooming, pacing, and self-mutilation.

Even smaller exotic pets, such as rare species of reptiles and birds, do not do well outside of their native environment. Seventy-five percent of wild reptiles die within one year of becoming pets, and 66 percent of African gray parrots die in transit before even reaching a pet store or home. Unless these animals are coming from a rescue situation in which they have no other option than to accept aid from humans, they are better left alone in their natural habitats.

Another downside to keeping large exotic animals as pets is their fate when owners realize they’ve made a mistake. Bear and tiger cubs, for example, quickly grow into large animals who can easily eat 10 pounds of raw meat a day. If you realize you can’t financially or logistically provide such big meals, what will you do with your pet? You can’t just drop your tiger at the local animal shelter.

To honestly care for an exotic, wild animal, you have to make a significant investment in research, enclosure space, materials, and coordinate with professionals in a manner that can quickly become a full-time job.

In the end, when you’re looking for an animal companion, don’t force a wild animal to conform to your lifestyle. Find a domesticated species like a dog, cat, or even a hamster that can better suit human cohabitation for both your sake and theirs.

Do you have a large exotic pet? What is your experience?

Meghan Belnap
Meghan Belnap, is a freelance writer who enjoys spending time with her family. She loves being outdoors and exploring new opportunities whenever they arise. Meghan finds happiness in researching new topics that help to expand her horizons. You can often find her buried in a good book or out looking for an adventure.