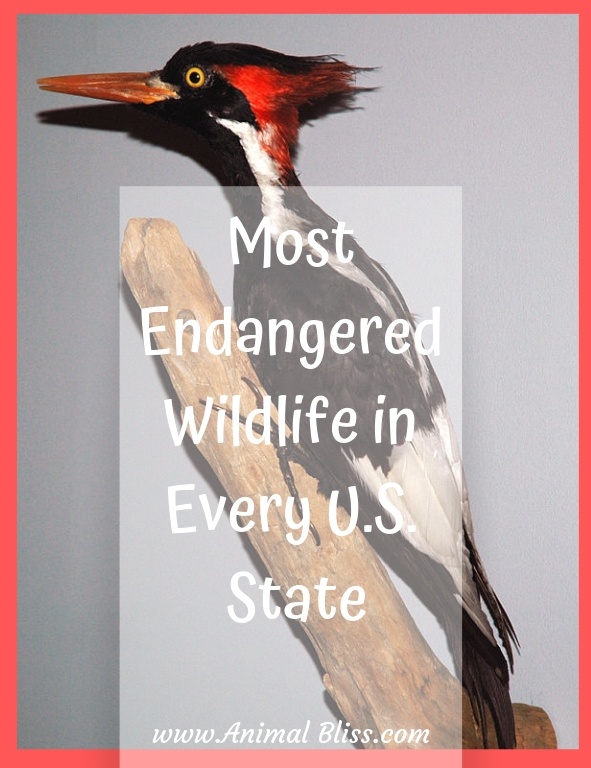 Most Endangered Wildlife in Every U.S. State

Thousands of endangered species around the world are on the brink of extinction. And human beings are biodiversity’s greatest enemy; we’re responsible for the endangered status of 99% of at-risk species, according to The Center for Biological Diversity.

Most Endangered Wildlife in Every US State

A handful of conservationists have been hard at work changing the story for a fraction of the populations at risk of extinction. But in the United States, hundreds of species are still fighting a losing battle for survival. Don’t miss out on the VIDEO at the bottom of this page.

To raise awareness on this issue, we have identified the most endangered wildlife in every U.S. state. To read more information on each animal, visit netcredit.com.

Our goal, as commissioned by NetCredit, is to raise awareness of lesser-known species that are under threat across the United States. We hope this will start a conversation around the fact that it’s not just the iconic species we see on nature documentaries that we’re at risk of losing forever.

Our research team gathered data from the U.S. Fish and Wildlife Service to build a long list of species that are flagged as ‘endangered’ or ‘threatened’ in every state of the USA. The team then shortlisted the top populations at risk of extinction in each state, making sure that there were no duplicated species as in some cases, certain states are home to the same populations. When finding a species that had been shortlisted already but was repeated in two or more states, we moved forward with the next domestic species on the list for the state we were working on.

Once the shortlist was ready, the project moved to the hands of the art director who (together with designer Nenad Radojčić) produced unique illustrations to honor each of the species in its natural habitat.

“Most Endangered Wildlife in Every U.S. State”

What state are you in and what is the most endangered species where you are?

1 thought on “Most Endangered Wildlife in Every U.S. State”