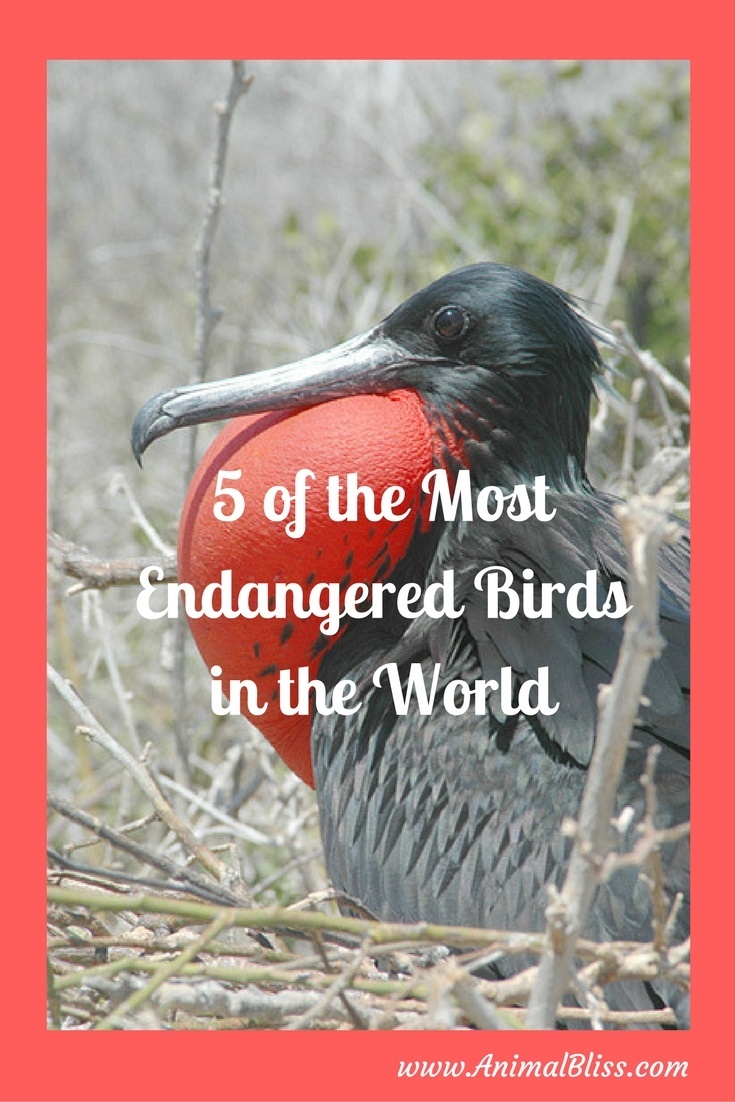 Most Endangered Birds in the World

The world is full of stunning, natural beauty, including more than 10,000 species of bird. It is unfortunate, however, that some of our most beautiful animals are facing extinction. Below we’ve rounded up five of the most endangered birds in the world, as of 2017.

This critically endangered Christmas Island frigatebird is one of the prettiest and most unusual birds on this list, with a red balloon-like throat and chest. There are currently 2,400 to 4,800 adult birds remaining in the wild, according to recent estimates. The frigatebird (Fregata andrewsi) has the largest wingspan to body weight ratio in the world, meaning that they can stay in the air for more than a week without taking a breather.

RELATED:
F is for Magnificent Frigatebirds – A-Z Collection of Animals

The rarest and most endangered bird in the world is the giant ibis (Thaumatibis gigantean), which is also the world’s largest ibis bird, weighing in at an impressive 4.2kg (9..25lb). The bird, which can grow to a meter (40in) in height, is critically endangered, with only 230 pairs remaining in the wild. The bird is most commonly found in northern Cambodia, with a few birds recently sighted in southern Laos and Yok Đôn National Park, Vietnam. Habitat loss and hunting have reduced the bird’s range, and it is predicted that there are less than 500 in the world.

Only 21 California condors (Gymnogyps californianus) remained in the wild back in 1981, but thanks to efforts from wildlife conservationists, the bird is now on the up. The bird, which is the largest North American land bird, it is the only surviving member of the genus (Gymnogyps) and remains a critically endangered species by the IUCN.

The kakapo (Strigops habroptila), also known as an owl parrot, is a nocturnal parrot that has evolved to become flightless due to a lack of predators in New Zealand. The species, which has, in the past, been identified through bird DNA testing in its Kiwi habitat, is extinct in the wild and survives today on three islands that are managed to protect the bird’s future. At present, 150 kakapos exist, all of which have been given names through the Recovery program.

Found most commonly amongst the grasslands and open forests of Cambodia, the houbaropsis bengalensis (also known as the Bengal Florican) is a stunning black, white and brown bird. With fewer than 1,500 adults left in the wild, the Cambodian government announced that it would work to protect the bird, and six Bengal Florican Conservation Areas were born. These areas are designed to serve as breeding habitat for the birds, but the sites also educate local farmers through an education program.

We’ve put together five of the most endangered birds in the wild, but unfortunately, this is only the beginning of the list. With global warming and threats to habitats, more and more birds are becoming endangered around the world. You can play your part by donating to bird sanctuaries and wildlife foundations and reducing your carbon emissions.