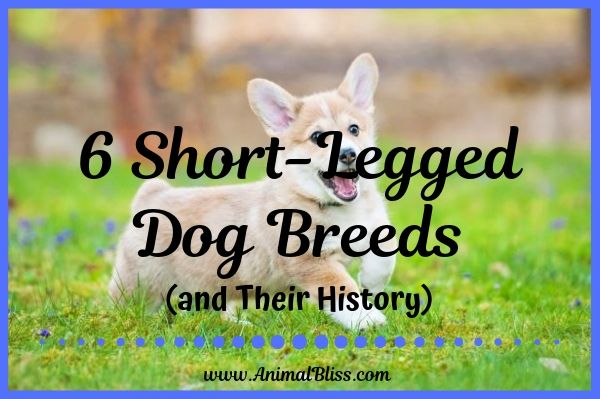 6 Short-Legged Dogs and Their History

Some of you are obsessed with those cute pups that have little tiny paws and short legs. But have you ever thought about the reason behind their short legs? Maybe not, it’s okay, here Petsnurturing will give you some interesting tidbits about six short-legged dogs and their history behind it.

Before moving on to the topic, there are two types of short-legged dogs – the ones who were bred short-legged to do their jobs properly, and those that are ‘dwarf’ breeds. These dogs came into existence when dogs separated from wolves during evolution, and this is considered to be a genetic mutation that is still studied by scientists and veterinarians.

The Dachshund dog, known for its long body and short legs, is one of the most popular of the short-legged dog breeds, which came into existence in the 1600s in Germany. The Dachshund was bred to hunt both above and below the ground. These are a fearless breed, trained to crawl underground in the badger’s burrow and fight with those vicious creatures. Dachshunds are brilliant, willful, bold, and proud dogs that can sometimes behave mischievously and clownish, which is the reason why they are loved so much. This breed comes in different coats of smooth, wire-haired, and long-haired, with color options of red, black and tan, blue and fawn. Plus point! They love to explore new things and environments, so if you are a traveler, your dachshund can be your best travel companion.

Cardigan Welsh Corgi is the oldest Corgi breed, bred for cattle herding. The origin of this dog is of Wales. They have a deep chest, larger and erect ears, rounded legs with medium size eyes of coat color. They are loyal, affectionate and adaptable. Give them proper training and socialize around as a puppy avoid his over-protective behavior. This breed of corgis responds quickly and attentively to obedience training. They are a very active breed of Corgis and like to play together around their family and other pets. This breed will try their best to convince you by circling or nipping around you and some can bark too. These corgies can be aggressive towards other dogs but they behave well around non-canines and other Corgis. This breed is small yet robust and capable of great speed and endurance.

Pembroke Welsh Corgi, a cousin of Cardigan, was also bred as a cattle herding dog but after Cardigan. This is a breed can be considered as the ancient breed that was brought to channel in 1107 by Flemish weavers. The interesting fact is that these Corgis are named after the origin of their city in Wales. Pembroke is less active than Cardigan. They have a deep chest with sprung ribs, short legs, ears that are neither round nor protruding and eyes either black or as their coat. Their face is more like a fox-face. The tail of Pembroke is docked at birth. They are devoted, highly intelligent, hardy, and obedient. Pembrokes are protective and guard dogs. They can be easy to live with if their days are filled with moderate exercise, love, and affection. Corgis can be seen in red, sable, fawn, black and tan.

The Basset Hounds are a smaller version of Bloodhound and is a French breed. They have a longer heavy-boned body with short legs and ears having a velvety touch. Their eyes have a brown color. The skin of Basset hound is hanging all over in many folds and lips too. His overall appearance is friendly and loving. Although he has gloomy expressions all the time, he is very gentle and sweet. They are a bit difficult to train but will respond quickly to tricks for food. So now you know the way to train your Bassie. They may look boring but they are more lively. Basset hounds love to give love. They can literally love anyone. And make sure you have fencing done as they like to sniff the ground and wander away.

Scotland originated Dandie Dinmont Terrier was first recorded as a breed in 1700 and was popular among the wealthy and middle-class Europeans throughout its history. At that time they were known as otters and badgers catcher. Don’t underestimate them because of their size; they are way more smart, intelligent, and confident. They have a sturdy and flexible body with short muscular legs; their eyes are of vibrant dark hazel color and a tail as ‘scimitar’ like shape. Scottish Terriers have a mixture of wired and short hairs that needs regular brushing. This breed can sometimes act stubborn but they are fun-loving and affection dogs. They cannot be trusted with non-canine pets because of their hunting nature but they can behave well around babies and even cats if raised with proper training around them. Don’t baby-pet them much as they can quickly develop “small dog syndrome.”

Scottish Terrier became famous in the United States as a President’s pet but the origin of this dog is in Scotland. They were first named Aberdeen Terrier as it was developed in the town Aberdeen of Scotland in the 1700s. They were originally used for hunting of vermin, foxes, and otters to protect the crops of the farm. The Scottish Terrier is a small heavy-boned dog with a compact body, a long-bearded face, and small yet muscular and strong legs. His almond-shaped eyes, with small, pointed and erect ears, and a blacked colored nose makes him look cute.

The color of the Scottish Terrier coat differs from black, brown, or golden. This dog has a personality of determined, independent, agile, fast and territorial. If not given strict but firm handling it will try to dominate the household. They are not at all easy to train because of their independent personality but be patient and train them for discipline and obedience. The Scottish terrier is good with older children as he hates being poked. Socialization is necessary from puppyhood to avoid his aggression towards the other dogs.

“6 Short-Legged Dogs and Their History”

Do you have a short-legged dog? Tell us about it.