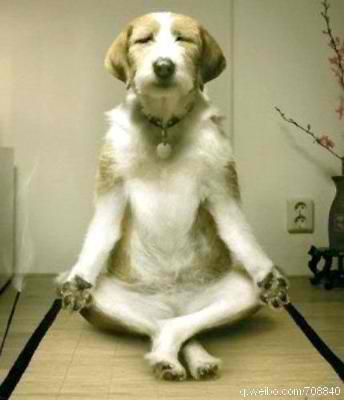 Doga (as in “Dog Yoga”) is the practice of practicing doing yoga with pet dogs.

Doga practitioners seek to achieve a greater harmony with their dogs through acts of meditation, gentle massage, and stretching. Canine acupuncture and chanting are also known to take place within the occasional Doga routine.

In Doga, the dogs and their humans work as one – the humans help their dogs facilitate different poses and, in some cases, the pets are used as props or instruments while the humans perfect their poses. This is seen to be a Zen way of practicing non-traditional yoga and training.

Doga has received some criticism from the yoga community.  Doga classes have been labeled inappropriate for trivializing the sacred practice by turning it into a “fad.”  Policies on teacher certification as loosely labeled too.  The dogs’ interference in participants’ concentration and relaxation are an issue as well.

Doga may even impact the welfare of the dogs, since dogs can’t tell us when they have had enough. Doga should always be practiced under trained professionals.”

What do you think?

What do you think of Doga?
Would you practice it with your pooch?