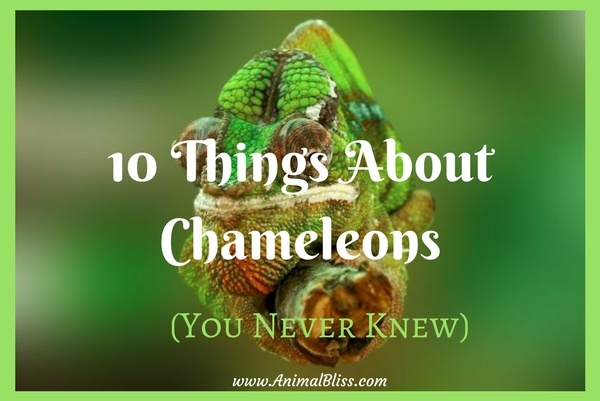 People generally know two things about chameleons – they are reptiles, and they can change color to match the world around them. In fact, these creatures are a lot more complicated and interesting than many people think. ExoticDirect has shared some interesting points.

Males come in dominant and submissive forms. The latter tend to be a little on the dull side while alpha males are more colorful for apparent reasons. Female chameleons and color change are closely associated with mating and can be used to either attract a suitable male or give them the cold shoulder.

Separately moving eyes isn’t that unusual in the animal world. Unlike most humans, who have their eyes fixed firmly to the front, chameleons can rotate their eyes independently of each other. The placement of the eyes on the head means chameleons have a 360-degree view of the world, something which is useful if you’re trying to avoid being eaten.

There are not just one species, but chameleons come in a whole range of shapes and sizes. Madagascar is something of a hot spot when it comes to these reptiles – it has around 50 of the 200 or so discovered species to date. That includes one of the tiniest, the Brookesia micra chameleon, which is not much bigger than a thumbnail. At the other end of the scale, you have the Oustalet which can reach lengths of up to three-quarters of a meter.

4. Their Power is in Their Tongues

If you’ve watched any nature programs about chameleons, you’ll know that they use their long and powerful tongues for catching prey. The speed with which chameleons can unleash this most potent weapon is incredible and can weigh as much as 41g.

5. Chameleons Have a Varied Diet

While the most significant part of their nutrition comes from catching crickets — as many as 50 a day in some cases). You can often find a chameleon munching on the local fruit and leaves to get a little extra sustenance. The larger varieties have been known to catch and eat small birds and indulge in a little bit of cannibalism on the side.

You have to head to areas like sub-Saharan Africa if you want to study chameleons in the wild. Fifty-nine species alone live on Madagascar and can’t be found naturally anywhere else.

Chameleons have just the right kind of feet for clinging tightly to the surface of trees, which is generally where they tend to hang out. Sharp claws and bunched toes make this easy for them but they also use their long, muscular tails for gripping onto branches, something they need when launching their tongues at the insects flying nearby.

RELATED:
How do Chameleons Change Color? Their Secrets Revealed

8. Male and Females Chameleons are Different

9. Chameleons Have a Short Lifespan

As with other reptiles, chameleons lay eggs and they can take a long time to hatch, as much as 12 months for some species. One variety, the Parson’s chameleon, actually has an incubation period of two years, which is surprising when you consider that the average lifespan of a chameleon is just over ten years. Chameleons kept as pets have a shorter lifespan.

10. Chameleons Have a Highly Developed Eyesight

Most reptiles tend to have poor eyesight but the chameleon is an exception. These reptiles can judge distances up to 10 meters and can also see things in ultraviolet. In comparison, their hearing is relatively poor and only works within a limited range.

Do you have things about chameleons to share that we haven’t mentioned here?

2 thoughts on “10 Things About Chameleons You Never Knew”