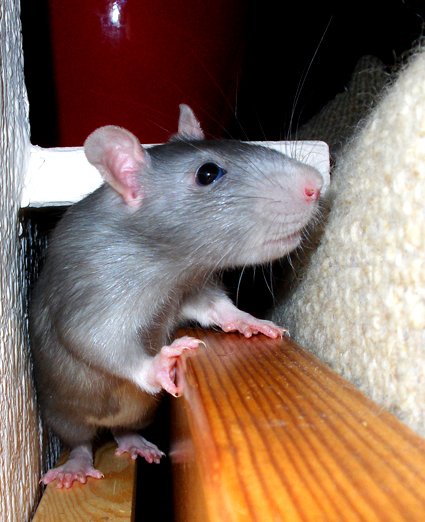 The fancy rat is a domesticated brown rat (Rattus norvegicus), which is the most common type of pet rat and comes in a wide variety of colors and coat types.  Domesticated rats are physiologically and psychologically different from their wild relatives, and pose no more of a health risk than other common pets if bred by reputable breeders. While wild rat populations could introduce pathogens like Salmonella into the home, domesticated brown rats are not considered a disease threat.

Caveat: Please, I urge you not to buy your rats from a pet store. Adopting from a rescue center is so much better. Do a Google Search – there are plenty.rescues sites with the cutest pet rats needing homes.

Fancy rats are typically easy to care for and are quite affordable, which adds to their popularity among pet owners. Domestic fancy rats are quite independent, loyal and easily trained. In fact, fancy rats are considered more intelligent than any other domesticated rodent.

Domesticated rats are quite sociable and function best with at least one cage mate. It is usually not a good idea to keep a single rat unless there are severe behavioral problems, such as those sometimes seen in some older males.  The earlier rats are introduced to one another, the better.  A good breeder will encourage new owners to take two or more rats of the same gender from the same litter for starters.

There can be some fighting at the beginning among males until the establishment of the alpha rat has been determined. After that, the rats should get along well.  Within two weeks to a month, the rats will most likely have adjusted and become friendlier with each other. Rats are typically friendly to other cage mates, particularly with females. They will even sometimes help or take care of other sick rats.

Two or more rats from the same litter and of the same sex can live together with no disruptions, except for an occasional friendly tussle and play fight. Although it is possible that rats from different litters can be integrated together, the integration process can be easy or hard. Several measures have to be taken to provide security for both rats.

Techniques for integration include bringing them to neutral ground, so they do not become territorial.  The process of integrating is easiest with two young rats, generally less than six months old. The process of blending is most involved with two or more adult male rats, as adult males are the least likely to accept new cage mates, especially after an alpha has been established.

Unless there is an issue integrating rats together, owners should always keep them in a group of at least three, as rats live in packs, which begin with three animals.  (Source: Wikipedia)

I hope you enjoyed this post and agree with me that these are indeed some of the cutest pet rats you’ve ever seen! It is my wish that you’ve learned a thing or two about domesticated pet rats.