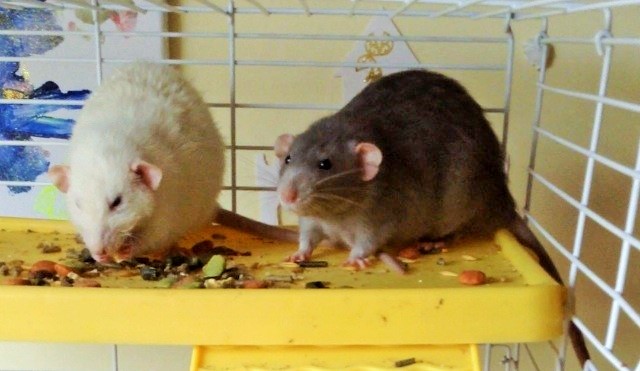 There are always things that happen in our lives that we never considered would happen to us, there’s something very nice about that – a surprise that makes us feel good. One such event is how I came to own two pet rats. To be honest I have never considered that I would own rats, I liked them enough and when I still lived with my parents my twin sister and I had owned mice, because she had taken to breeding show standard mice for rare colours and markings. It was one of my earliest experiences with owning rodents, and not something I had chosen to be particularly involved in.

While I had moved away and taken to living a more typical working life in an office on weekdays, my sister had gone on to work at an animal shelter. I missed having pets, and at the time lived in a small flat with some students. My dog had to be left with my parents until I could move somewhere he would be allowed to live, but I had considered a smaller pet to keep me company in my room. Though I’d never actually done anything about it.

One evening my sister called me, and before I could even offer the conventional greetings she had asked me if I wanted some rats. Naturally I was confused, at least until she explained that the animal shelter she worked for had been involved in an animal hoarder case and a number of animals had been removed from the property, including rats, chinchillas, dogs, cats, ferrets and hamsters. The shelter had no facilities for caring for rodents, and they were being taken to the home of one of the volunteers, but with urgent rehoming needed. There were fifteen rats in this situation, and in the end I agreed that I would take two.

It wasn’t even a week later that I had the little guys, having hurriedly bought all of the things they would need. They didn’t get the best start with me, just a day after the poor little guys had met me and been put into an unfamiliar situation I had dragged them off to the vets to be checked over and treated for their mites. But even after they had the all clear, had settled in and started to gain the weight they had lacked, they didn’t seem to be warming up to me at all. I tried everything I could think of, and researched to no end, they took food from me, but weren’t at all happy to actually be touched.

To be honest it was depressing – I thought I was giving them a loving new home and they seemed to resent me like a cruel step-mother. After a little more than four months had passed, I gave up. They would come out of the cage and hang out around me, but not get too close and not allow contact, both went back into the cage when told to rather than risk being picked up and put back. Talk about stubborn. I assumed that this was just how things would be between us now, even the cold indifference of my mother’s cat seemed affectionate by comparison. 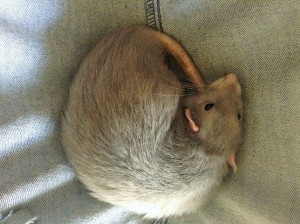 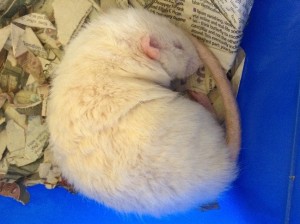 {Jack – Adorable, but a bit of a jerk when he wants to be} {Rodger – The quieter and sweeter of the two.}

Even after I moved to a place that allowed pets, brought my dog to live with us and set up a special area for the rats where they could be spoiled rotten – things didn’t change. Then I got a cardboard box and tried making a new toy for them. Now – we all know that cats like boxes, the internet has proved this more than once, but did you know rats love them too? I cut a few holes in it, attached their tunnel and set it all up in their play cage with their other toys. They loved it. Climbing on it, hiding under it, chasing each other through it. After a good play they inexplicably seemed more content and confident around me. The box became a regular toy that came out almost every time they did, and of course they got new boxes every so often which added to their excitement. 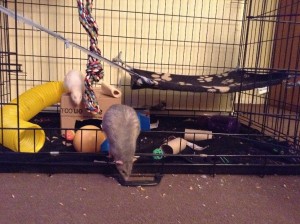 It seemed odd at the time, but the more the boxes were played with the more they seemed to warm up 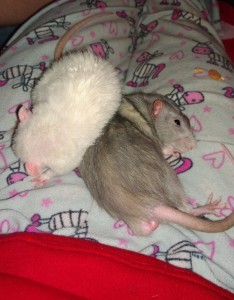 to me. Perhaps because they only got the box when I was around they considered it a positive sign of my company. One afternoon I was just lazing on my bed, they were playing with their box at the bottom of the bed, and suddenly their game of chase ended up on my lap. All three of us were pretty surprised, they froze and just looked at me, and I looked at them. Of course they slowly retreated back to the foot of the bed to hide in their box, but slowly they started to play closer to me. Over the days and weeks they became more confident and social. And now they are more than happy to play with me, seek attention from me and even allow me to bath them.

Kate Critchlow is a young writer and pet enthusiast, with a particular interest for recycling cardboard boxes to create interesting, degradable pet houses and toys.

I hope you have enjoyed, “Cardboard Boxes and Rats, by Kate Critchlow“