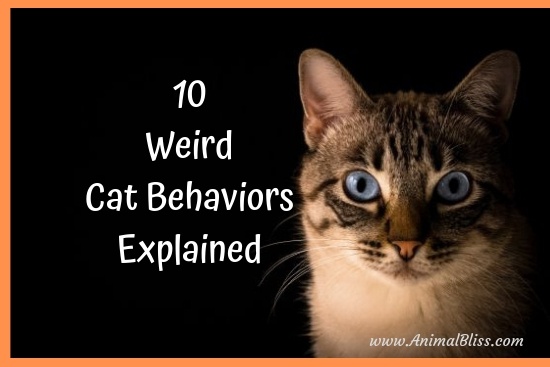 Getting used to how your cat behaves can be amusing. There are several things they do that can only make you stare and wonder. While cat lovers may merely shrug their shoulders and say that it’s normal for kitties to act a certain way, the rest of the population can only scratch their heads in confusion.

New cat owners may even panic when they begin to notice these feline quirks! Most of these actions can be traced back to the cat’s primal instincts, while others are behaviors that you should look out for as they may be signs of a medical or psychological condition. Ten of those cat behaviors explained here are the most common.

Have you ever gotten a massage from your cat or seen those cute cat videos where they give their humans or their fellow kitties a massage? This is what we call kneading, or as some would playfully refer to, as “making biscuits,” as it is quite similar to the movement done when preparing a piece of dough.

Kittens develop this movement at an early stage as they press their paws onto the mother cat’s breasts to stimulate milk release. While this is common for kittens, it can continue into adulthood as fully-grown cats continue to knead and massage their humans or other cats.

They aren’t trying to get milk from you. Instead, behavioral research has shown that this is a sign of attachment. It is a way for your cats to connect with you as they try to rub their scent on you.

Much like kneading behavior, bunting, or head-butting, is a way for your cats to show affection. Since cats have scent glands throughout their bodies, they use rubbing and head-butting as ways to transfer their scent on you.

Typical behavior in wild felines such as lions and tigers, bunting has been identified as a regular feline social behavior. Domesticated cats have continued this social instinct and have carried it on as a way to show that they have accepted their human as part of their family.

Despite the large area available for your kitty to lounge around and relax, there are times when you find them curled up in a tight and private spot. They could be under the sofa, inside a box, or hiding somewhere.

While some would consider this behavior to be a sign of anxiety or depression, most cats enjoy the warmth and security that these spaces offer. The cat’s ancestors found comfort in enclosed spaces as it would conceal them from possible predators. Your cat feels the same when he’s curled up in the privacy of his own tight and cozy spot.

If you have ever been in a state of shock and disgust upon finding a dead rodent or bird at your feet, know that you are truly loved and appreciated by your feline companion. Gifting prey is one way for your cat to display his affection for you.

This can be viewed as cats treating humans as fellow cats. Some researchers believe that cats identify us not as humans, but as bigger, clumsier cats. In this way, they see the dead animal before you as a food offering gifted to you out of their affection.

Domestic cats were bred from larger, wild felines which are known as hunting animals. Without the need to track and stalk their prey, cats save up a lot of their energy.

Sometimes, they just need a sudden release of all their stored energy, which explains why there are times when you see your kitty sprinting from one room to another for no apparent reason.

Cats are rather jittery creatures, but even when no sudden stimulus appears, they take off in a swift run. Take this as a sign that your kitty has a lot of energy. Maybe a bit of exercise could do them good?

RELATED:
What is Animal Communication – How Can it Help Our Pets?

Dog owners are used to seeing bits of their stuff getting chewed up, especially when they have a new puppy around. Chewing is normal behavior for teething pups, but for cat owners, this is an alarming sign that something may be wrong with their cat.

There are a number of causes to Pica, from high levels of stress, diet deficiencies, lack of attention, to genetics. It is best to take your cat to a vet to find the root cause of this behavior because this could lead to digestive problems and other health conditions.

Cats are usually nit-picky creatures who enjoy keeping themselves and their environment clean. When a cat suddenly starts leaving their waste uncovered, there may be underlying reasons for this.

Paw injuries could prevent them from covering it up. A more serious case would be when your cat has a urinary tract infection. However, it could merely be that the litter box is too dirty, it needs to be changed, and they just want you to clean it up!

Usually, nail-biting is a part of a cat’s grooming process, but when continuously done, it could be a sign of anxiety.

Claw-biting is a behavior that seems strange at first but when you consider the too-common human behavior such as nail biting, you begin to realize that it’s not so weird after all.

Cats resort to nail-biting behavior when they are nervous or anxious, just like humans.

When it becomes constant, however, nail-biting may be a sign of medical conditions such as ringworm or pemphigus.

Cats chatter, an action where they create a sound with their teeth when they see their prey. You can observe this behavior the next time you find your cat staring through a window and watching nearby birds.

At the sight of prey, feline predatory instincts are triggered. Studies have shown that the movement stimulates glands in the cat’s mouth that allow them to smell their prey. Others believe that chattering is a result of frustration from not being able to attack. Either way, it can be linked to their predatory instincts.

Cats have this endearing, but at times annoying habit of lying down on your things, especially at the moment you are using them. While it is obvious that they are vying for your attention, this is also a way for them to leave their scent on your belongings as a way of marking their territory.

Does your cat have any other strange behaviors?