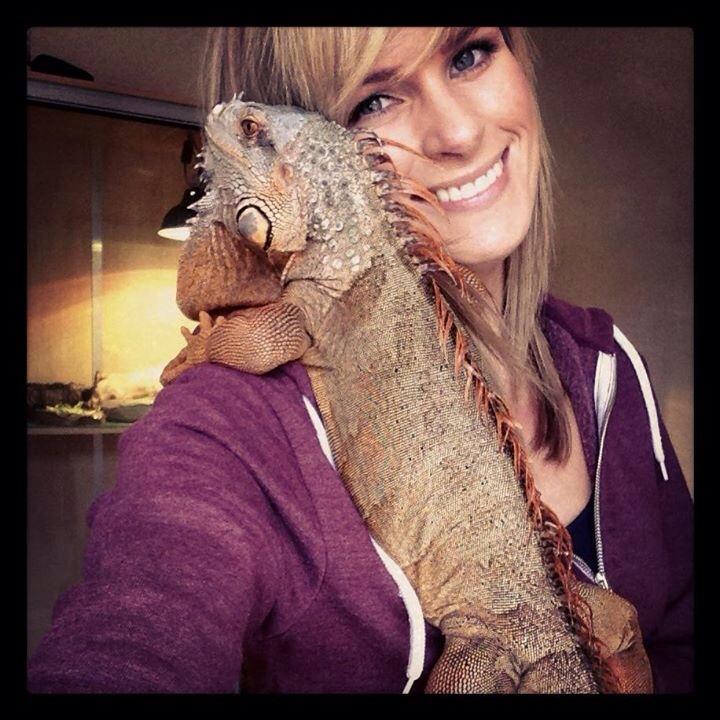 
I have kept reptiles for 15 years now and it all began with my first rescue, a corn snake.  I have rescued and

rehabilitated a number of other reptiles in that time but never an iguana, the one reptile I had dreamed of owning myself … until one day I called into a reptile shop (not my regular) just to have a look around and spotted a little red iguana hatchling only a few weeks old.  I felt so sorry for him and he was just being fed defrosted cauliflower, broccoli and carrot, which really got to me as these are the most important stages of his life he needs nutrients to grow (like a baby needs milk). I asked the shop owner if he was for sale to which he promptly replied “No!  He is going to be my shop pet.”  So not to sound as though I knew more than the “expert” I advised he fed him something with a bit more nutritional value. He laughed at me and said he’ll be fine!

I continued for about a month to call in and check on the little newt but no progress had been made and he was still looking sorry for himself. I felt awful, until one day I discovered the shop was having to close down with no place for the little newt to go.  The owner agreed to sell him to me, and 6 years later my handsome man is still with me. I named him “Drako” which in Latin means, “dragon.”  I felt this would be more apt when he reached adult stage, as he is now 4 feet from nose to tail and “little newt” wouldn’t quite suit him.

Iguanas aren’t for everyone, as many people don’t realise the size they do grow to and the space they require.  Drako, for example, has needed 3 custom built vivariums in the past 6 years, something many aren’t financially ready for, as these can easily cost around £800-1000 ($1,400-$1,800 US). He has now finally settled into his own room in my new house … although he thinks he is King of the whole house!

I am very lucky that Drako has such a good temperament and that I can let him come out of his viv (vivarium) to free-roam (when I am in, of course) as many ig’s when they reach maturity can turn very aggressive, or when in breeding season, be very grumpy and chase after their owners to attack or defend “their territory!”  I have seen many people over the years who have had some rather nasty bites. That’s not to say I will never encounter one from Drako at some point in his lifetime as, like us, iguanas have their off days too.

Drako Davis isn’t a morning iguana and can display warning signs if I get too close to him before he’s warmed up, but I know he is just being moody so I tell him to stop being a “Mr Grumpy” and I rub between his eyes in a circular motion and he lays back down. Once he has warmed up though, he knows it’s breakfast time (iguanas are very routine oriented) and so gets his fresh spring greens, green beans, mange tout, butternut squash, red pepper etc.  His veg varies each day to ensure he doesn’t get bored, but his favourite treats are blueberries and brown bread.

If he comes out to free roam, he will generally have a little route in his head where he will come downstairs and check if the back door’s open to go outside and bask in the sun.  If the door isn’t open he’ll turn around and lay on the living room window and watch out the front, then he’ll sit on the sofa and watch tv.  Then, when he’s bored with that, he’ll take himself upstairs and climb into an empty bath, waiting for me to fill it up so he can relax in there before bed.

I really did get a good egg with Drako and I couldn’t imagine life without him. To anyone thinking about getting an Iguana I would advise you do thorough research before making a 15-20 year commitment.

I hope you have enjoyed, “Drako Davis, a Rescued IGUANA With a Story to Tell“

Wow, right?  Did you see that beauty?  Yes, Anneka is a beauty, for sure, but I was kind of referring to Drako Davis.  Share your thoughts in the comments below and give Anneka a HUGE round of applause for all that she does for the love of Drako and others that she has rescued throughout the years.

THANK YOU, Anneka, on behalf of dragons everywhere!

15 thoughts on “Drako Davis, a Rescued IGUANA With a Story to Tell”