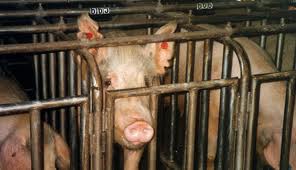 A disturbing undercover investigation reveals how pigs suffer and die at top breeder facility and worldwide leader in pig production.  This video was captured by a PETA investigator at a leading supplier to other pig meat companies of pig semen and the sows who are artificially inseminated to produce more pigs to be slaughtered. It is the first-ever undercover look at the very beginning of the lives of animals who become bacon, pork chops, and sausages.

Nothing More Than Numbers

These clever and sensitive animals, who animal behaviorists have found are smarter than dogs, are identified by having a tag punched through their ears and become just another number inside the factory. Here are just a few of their stories:

Many pigs’ abdomens had huge bulges caused by protruding intestines. These pigs were also relegated to the “junk pen.” Later, they were loaded onto trucks and taken to slaughter.

As is typical of most pig–breeding factories, mother pigs at this factory farm are confined to crates so small that they can’t walk or even turn around. Pigs, who are known to be excellent mothers and who “sing” to their piglets, are kept in such restricted conditions that they can’t shift positions while nursing without having a metal bar or prong pressing into them. The constant pressure of the hard, slatted floor and the metal bars rubbing against the sows’ bodies causes gaping ulcers.

The company’s vice president admitted that if pigs “don’t get the treatments” they need, “they’ll die.” Dozens of pigs were found dead at the factory farm during the course of PETA’s investigation.

If this is the best that the pig–breeding sector of America’s pork industry has to offer, imagine the rest.

And remember, the best thing that you can do for pigs is to refuse to eat them!

Suffering like that documented at this factory farm is widespread in the meat industry—including at slaughterhouses. Despite this, the U.S. Department of Agriculture (USDA) wants to cut its budget for regulating the slaughter of chickens and turkeys and slash the number of federal inspectors on slaughter lines, leaving slaughterhouses to police themselves with almost no government oversight. This program could hurt billions of animals every year.

Please join me in contacting Secretary of Agriculture Tom Vilsack and asking him and the U.S. Department of Agriculture to pursue more funding for slaughterhouse inspections that would make pigs’—and many other animals’—deaths less terrifying and painful.

Together, we can make a difference for these suffering animals.

All you have to do is take action today.

I hope you have learned something from: “Pigs Suffer and Die at Top Breeder, PETA Secretly Expose“