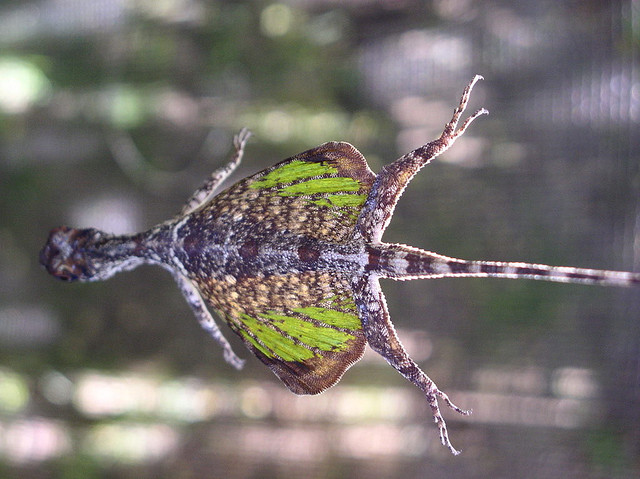 Draco is a genus of agamid lizards that also are known as flying dragons.  They are arboreal insectivores.  Because of the Draco lizard’s small size, it becomes dangerous to be grounded for any length of time while searching for food, attracting mates, and escaping danger.  Therefore, the Draco Lizard has, over thousands of years, adapted to capacity for flight.

These so-called flying dragons have a set of elongated ribs.  Between these ribs are folds of skin that rest flat against the body when not in use, but act as wings when unfurled, allowing the Draco Lizard to catch the wind and glide.  The hind limbs are flattened and wing-like in cross-section, and a small set of flaps on the neck serve as horizontal stabilizers.

While not capable of powered flight they often obtain lift in the course of their gliding flights. Glides as long as 60 m (200 ft) have been recorded, over which the animal loses only 10 m (33 ft) in height, which is quite some distance, considering that one of these lizards is only around 20 cm (7.9 in) in total length (tail included).

The undersides of the flying dragon’s wings are blue in males and yellow in females. They also have a flap of skin on the bottom of their necks called a dewlap. This is bright yellow in males and bluish gray in females. Males are highly territorial and will use their ability to glide to chase rivals from the two or three trees they claim as their own.

Draco Lizards avoid going to the ground, although females must descend to deposit their eggs. The female lizard uses her pointed snout to create a small hole in the ground, where she lays about five eggs and then covers the hole with dirt. She stays on the ground for about 24 hours, fiercely guarding the nest, and then returns to the trees and leaves the eggs to their fate.  She has nothing more to do with her offspring from then on.

7 thoughts on “Draco Lizard, Is it Really a Flying Lizard?”