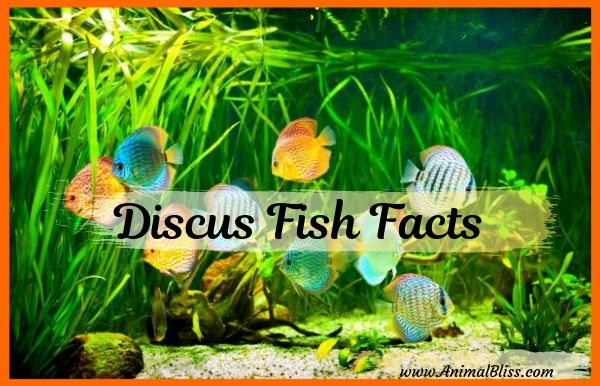 Discus fish belong to the family Cichlidae and the genus Symphysodon. The three natural species of discus fish go by the scientific names Symphysodon discus, Symphysodon aequifasciatus, and Symphysodontarzoo. In addition to these native species, there are a variety of man-made discus species produced through selective breeding and natural mutations. Though discus fish are a type of cichlid, they are very different from many members of this family of fishes.

Discus fish are most similar in appearance to angelfish which belong to the genus Pterophyllum. Because angelfish also originate from the tropical regions in South America, they have tank requirements similar to those of discus fish. Discus fish and angelfish both exhibit round, laterally compressed bodies often marked with longitudinal stripes.

Pet stores and breeders often sell juvenile discus fish when they reach the approximate size of a half-dollar. Though their adult size may vary slightly depending on the species, most mature discus fish grow to between 8 and 10 inches in length. The average weight of most species of tropical fish can be figured at a rate of 10 grams per cubic inch. A mature discus fish might exhibit the measurements 6 x 4 x 0.5 inches, putting its weight around 120 grams. Because a large portion of a discus’ size can be attributed to fins, however, its weight might be more accurately estimated around 75 grams.

The main distinguishing feature to which the popularity of the discus fish can be attributed is their vibrant coloration. Though many of the “natural” species of discus fish are somewhat bland in coloration, man-made specimens display a wide variety of colors and patterns ranging from brilliant blues and bright yellows to deep reds and striking greens.

In addition to their beautiful coloration, aquarium hobbyists appreciate the calm elegance of these fish. Discus fish are generally quiet, peaceful, and exhibit a dedication to their young unparalleled by most tropical freshwater species. Unlike many species which eat their young, discus fish care for their fry for up to two weeks after they hatch.

The Bodies of Discus Fish

All species belonging to the family Cichlidae have flat bodies. Discus fish, however, exhibit the most laterally compressed bodies of any cichlid.

Their round, discus-like body shape is another unique characteristic which differentiates them from other cichlids. This shape is particularly suited to the native environment of discus fish where they must be able to navigate thick stands of underwater vegetation and submerged roots with relative ease.

Most species of discus fish grow to be quite large, measuring between 20 and 25 cm (8-10 inches) at the height of their maturity. Though most varieties of discus exhibit a similar shape and size, there are countless color variations. The bodies of discus fish may be green, brown, red, or blue offset by dark or colored stripes or veining. All discus fish have nine vertical stripes on their bodies, though the intensity and thickness of these stripes may vary according to the type of discus. In some species like the Heckel Discus, several of these stripes are bold, but in other species, they may be barely discernible. 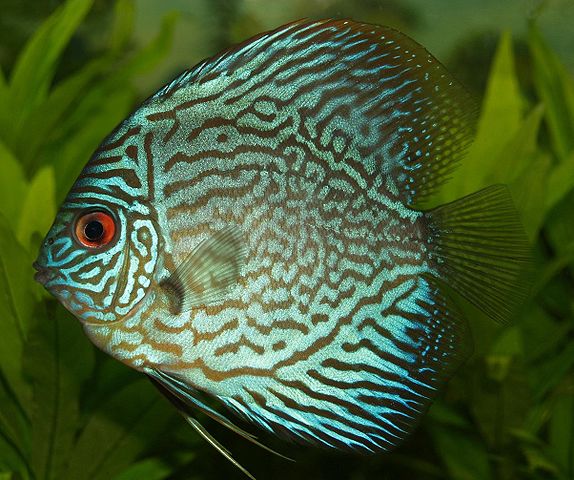 Related:
How to Keep Your Fish Tank Safe from Children

While many species belonging to the cichlid family are territorial and aggressive, discus fish are generally peaceful, social fish. Discus fish are schooling fish and, as such, prefer to be kept in groups of three or more. Even when kept in schools, discus fish can be very timid and become stressed in a tank that does not provide adequate places to hide. These fish may also become spooked by moving shadows or excessive traffic near the tank as well as loud machine-generated alternative text: noises and lights being turned on and off. Though they are shy, discus fish are often active during the night when the environment around the tank has calmed down.

One of the most unique behaviors exhibited by discus fish is their tendency to care for their young. Unlike many freshwater tropical fish which eat their eggs or newly-hatched fry, the fry of discus fish depends upon their parents for nourishment during their first days. The fry feed on the layer of mucus that grows on the skin of mature discus fish. While the adult discus fish are not likely to harm their young, the fry should be separated after about ten days to avoid damaging the skin of the parents.

Though discus fish are not typically aggressive, they tend to form a pecking order which may be strictly enforced. Signs of aggression are more likely to be observed in pairs or smaller groups of discus fish than in larger groups where it may be difficult to single out a particular fish. As your discus fish mature, they will naturally establish a pecking order, and aggression may not be a problem. If a new discus is added to the tank, however, the dominant fish in the tank may feel threatened and could become aggressive toward the newcomer.

Discus fish display their aggression in much the same way as other species of tropical freshwater fish. They may be seen chasing each other around the tank or forcing one individual into a corner. Discus fish may also lock jaws, peck at each other and, in extreme cases, slap their bodies against one another. If the aggression of discus fish is allowed to get out of hand, the fish being victimized may become stressed or fall ill. It could die if you do not take steps to remedy the situation. To keep this situation from becoming fatal, discus fish should be given plenty of hiding places in the tank. Live plants and rock caves can provide shy or bullied fish with a place to retreat, should they need to. If one discus fish, in particular, is becoming overly aggressive, it may be wise to remove it from the tank.

What type of tropical fish do you have in your home?