Here are some fun facts about Giant Anteaters that I’ll bet you didn’t know.  Such as, did you know it has a 2-foot long tongue?  No?  Read on then, for some more cool stuff. 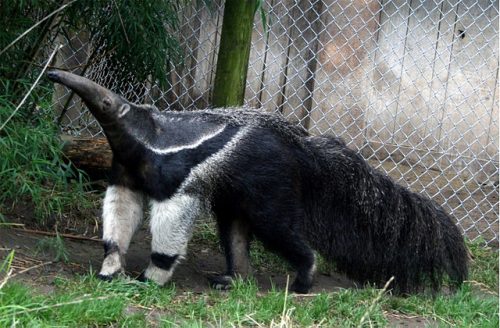 The anteater has no teeth and is capable of very limited jaw movement.  Jaw depression creates an oral opening large enough for the slender tongue to flick out.  The tongue is covered in backward-curving papillae and coated in thick, sticky saliva secreted from its enlarged salivary glands, which allows the anteater to collect insects with it.

During feeding, the tongue moves in and out around 160 times per minute (nearly three times per second).  When fully extended, the tongue can reach 45 cm (18 in); longer than the length of the skull.

They just mash ants against the roof of their mouth and eat more than 35,000 ants and termites every day.

Giant anteaters have five toes on each foot, which includes four claws and a smaller vestigial toe. Three of these claws are more prominent than the others.  The anteater walks on its front knuckles (similar to the African apes) because its claws are so big and sharp and this helps to keep them out of the way. 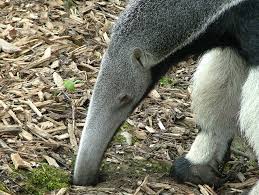 Giant anteaters carry their babies on their backs to make themselves look bigger and protect themselves from predators.  Infant giant anteaters spend up to the first two years of their lives with their mothers and spend most of their first year clinging to her back.

Giant anteaters can mate all year round.  Male and female pairs are known to feed at the same insect nest.  While mating, the female lies on her side as the male crouches over her. A couple may stay together for up to three days and mate several times during that period.  Gestation lasts around 190 days and ends with the birth of a single pup, which typically weighs around 3 pounds (1.4 kg).  Females give birth standing upright.

Pups are born with eyes closed and begin to open them after six days.  The young communicate with their mothers with sharp whistles and use their tongues during nursing.  After three months, the pup begins to eat solid food and is fully weaned by ten months at which time the bond decreases between mother and offspring.  Young anteaters usually become independent by nine or ten months and become sexually mature in 2.5 to 4 years. 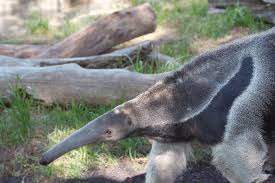 Sloths are one of the anteater’s closest relatives.

The giant anteater is listed as Vulnerable by the International Union for Conservation of Nature. It has been extirpated from some parts of its former range. Threats to its survival include habitat destruction and poaching for fur and bushmeat, though some anteaters inhabit protected areas.

Giant anteaters have been around for 25 million years!

RELATED:
Sloths: Fun Facts About Sloths That Will Make Fall in Love with Them

MY QUESTION FOR YOU TODAY:   Isn’t nature marvelous?  Have you ever seen an anteater or a sloth?  Aren’t they the coolest?