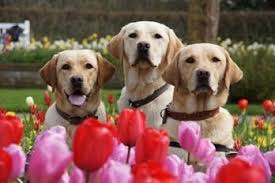 Guide Dogs for Veterans is one of the many valuable programs offered by The Royal Dutch Guide Dog Foundation (KNGF).  This TV commercial shows the assistance a veteran dog can offer in helping a military veteran who is coping with severe war-related trauma.

KNGF, established in 1935, has been training guide dogs for visually impaired people for more than 75 years and has trained over 5,000 dogs for guide dog users in various parts of the Netherlands.  Next to their core business of training guide dogs for the blind, they now also help people with other disabilities, such as PSTD,  with a specially trained dog.

“We not only help people who cannot see, but also those who have seen too much.”

The Foundation’s instructors are trained over a period of approximately three years. They are not only taught how to train guide dogs but also how to instruct visually impaired people on working with their guide dogs. This means that their instructors have studied several disciplines such as orientation and mobility of visually impaired people, causes and consequences of the different eye diseases, psychology and first aid. It goes without saying that canine behavior and training are an important part of the studies.

See Also: Hendrick Boards Skateboarding with a Mission to Save Animals Nationally