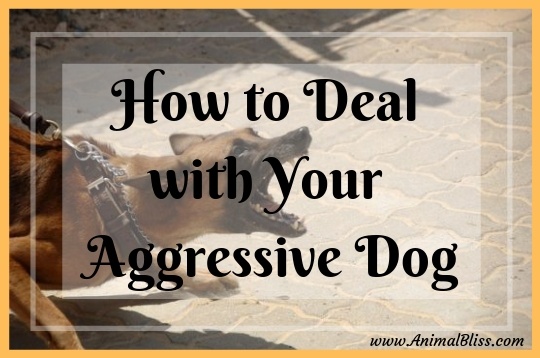 How to Deal With Your Aggressive Dog

Dealing with an aggressive dog isn’t easy. After all, you work hard to keep your dog healthy, and it’s unnerving when he still misbehaves. You might start to feel as though his behavior is a result of something you’re doing wrong, or perhaps you just can’t seem to connect with your pet like you thought you would. Often, an aggressive dog behaves fine with his owners, but doesn’t act well around others and has difficulty in public. Knowing how to deal with your aggressive dog can be frustrating.

There are several reasons why your dog could be aggressive. With the majority of cases, dog aggression isn’t genetic. Therefore, the excuse that the dog was “born that way” is equally invalid. There are more realistic reasons why you could have an aggressive pet on your hands. For example, if you adopted your dog, he could have been improperly trained by his previous owner. Past trauma, lack of socialization, and medical issues are also all contributors for aggression. With that in mind, here are a few tips on how to deal with your aggressive dog

You’ll find that determining these types of aggression are relatively straightforward. A dog with possessive aggression will become visibly upset when another person or animal comes near something they find highly valuable, like a chew toy. Dogs with fear aggression tend to cower away, lick their lips, or bare their teeth.

In analyzing your dog and the signs he exhibits around others, pay attention to when those aggressive signs start to come out, and keep note on what triggers it and when. By paying attention to his behavior, you can have a more candid, detailed conversation with a specialized trainer or veterinarian.

Dog owners who retreat to their dogs—whether knowingly or unknowingly—make it easy for those dogs to feel deserving of their dominance in the home. If the dog “runs” the house, they’ll never understand that their behavior isn’t unacceptable. There are a few things you can do to begin to curb household habits and establish ownership in your domain.

For example, start to use a leash indoors, too. When your dog begins to misbehave, such as when he jumps on the bed or sofa or does anything else you don’t want him to do, you can reel him back in. You can also place him in a crate during bedtime, or whenever he becomes too aggressive. Doing this will help him better understand commands and how you will not tolerate certain behaviors. Aggressive dogs believe they are the alpha at home, and the goal is to switch the authority role to yourself.

Cannabidiol is just one active cannabinoid found in cannabis. Unlike THC, CBD is derived from the hemp of this naturally growing plant, which eliminates the intoxicating effect. Instead, CBD works with dogs by engaging pre-existing anandamides found in dogs. Believe it or not, anandamides are types of cannabinoids that already exist in canines. CBD oils and tinctures from specialty companies like Cannabidog work by stimulating areas that keep dogs calm and help to relieve stress. As a result, it’s a safe, natural way to help treat pets with aggression.

Although it’s important to establish authority, it’s equally important to be careful about how you’re doing this. Punishing your dog with the wrong tactics can create an adverse effect, and make him even more hostile and aggressive. For instance, if you punished a child by hitting them, although they may not exhibit any signs of anger straightaway, it could have an emotional effect over time, creating a nervous disposition.

If your child were afraid of the dark, you’d give her a night light—you wouldn’t force her to sit alone in a dark room until she overcame that fear. Punishing your dog by hitting him could also lead to pent-up aggression which may be released on another person or animal. Instead of using harsh punishment tactics, think about how you can use positive reinforcement in your household.

Sometimes, pet aggression stems from an underlying medical issue that’s difficult to catch. If you notice your pet’s aggression has suddenly evolved out of seemingly thin air, take him to the vet and explain your situation. Epilepsy and hypothyroidism in dogs are both conditions that have aggressive symptoms. At the very least, it never hurts to take an extra look at what’s going on with your dog and rule out certain possibilities.

“How to Deal With Your Aggressive Dog”

Guest Writer: Susan Combs works as a Pet Health and Safety Expert and holds expertise in the area of animal/pet care. She has over 6 years of experience in pet healthcare and is a pet parent to a dog named Chilly.

Other articles by Susan Combs:

Is your dog aggressive? What are you doing about it?