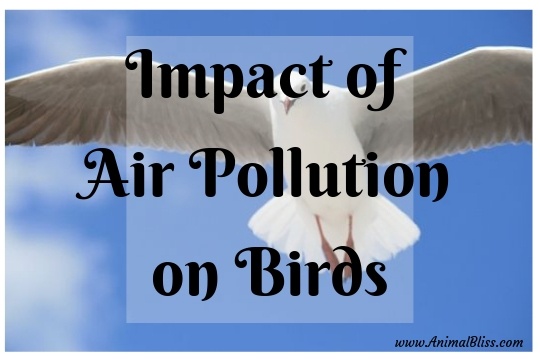 The Impact of Air Pollution on Birds:

How the Soul Returns to its Ancestors

Of Birds and Myths

When my father, a prominent local educator, became very old, he looked upon the long path of his life and remarked”

“If God truly loved a man, he would preserve that man from sickness and let that man’s soul fly free to be with the ancestors forever.; let that man’s spirit arise every morning, like the Ba in our people’s myths, to brighten up the land of the blessed dead and keep watch over his family, all the days of their lives.”

His eyes misted over, and I said nothing.

“If there is an afterlife, that’s how I see it. Our souls borne aloft on birds’ wings, forever intersecting heaven and earth; the Ka forever united in celestial camaraderie with the blessed dead; the Ba returning every day to its family, reminding them of death’s own limitations; it is simply a new beginning.”

That particular paradigm would later hold a strange fascination to me in an entirely unexpected way. I sat quietly with him, holding his hand, watching the sunset together. Keeping silence seemed best. An older man reflected on his impending mortality while a younger man barely accepted his own. I still remember the words from The Book of The Dead, as fresh as I heard them from my father’s lips, “Gone am I, caught by the Underworld, yet cleansed and alive in the Beyond.” The bird and the soul; how curious the temptation to anthropomorphize. Yet compassion may be borne from it.

My family has always had a curious attachment to birds. Among my father’s extensive personal library which contained the likes of Shakespeare, Rushdie, and Milton, could be found such dubiously-sounding, ornithological treasures as William Butler Yeats,’ The Wild Swans at Coole, or Anton Chekov’s The Seagull. Much of the literature I studied in university in some way, tangible or metaphorical, alludes to some universal allegory about the role of birds in relation to human existence. But, as it stood, I was the only serious birder and wildlife aficionado in my family. My father taught high-school English; my mother’s particular vocation included backyard bird watching and gardening. She knew how to create elaborate gardens with the right focal points and features that birds favor. I still find her reading from the book, “Eastern Birds of North America,” endlessly citing facts and statistics about our feathered neighbors frequenting the backyard.

In my parents’ backyard, I first witnessed the beauty of American Goldfinches and Black-Capped Chickadees, reveling in bird song as melodic and harmonious to me as any concert orchestra. You could sit in the yard for hours, enjoying close encounters with curious hummingbirds, or watching purple finches nearly drowning as they drank from the fountain. To me, all life seemed contained in the lives and actions of these marvelous little creatures. Their lives were cyclical and animated, joyful or tragic, as our own. They, too, remain tied to the old cycles of nature versus nurture, life and death, or climate change. All life, all passion, all struggle, are contained within the tiniest of existences. Small wonder many civilizations and cultures felt an affinity with them. An old professor of mine had become a well-known birder and wildlife advocate. I remembered that old mythological idea of the soul transforming into a bird, or being borne to the Heavens by a bird. Birding held a strange appeal, like trying a sport considered the provenance of older people, not younger men.

My first birding forays took me to places along the Great Lakes regions of Canada. Mississauga’s Rattray Marsh, the Toronto Island, and High Park gave me glimpses into birds I had never before seen. I watched Brown-Headed Cowbirds forage for seeds on High Park’s Trails; saw green-bodied Vireos attend to their nested young; observed small birds like Parulas and Nuthatches land closer to me to distract me away from their nests. Of course, I had no intention or designs on their nests. No ethical birder does. In Cootes’ Paradise, near Hamilton, I encountered my first Osprey; a white face adorned with a brown mask; with a body as elegantly shaped and uniform as any hawk species; I met him near Sassafras Point, close to the lake. He resented my intrusion at first, sharp little rapid-fire squeaks from his nest twenty feet above me.

This bird experience convinced me to turn to photography. Binoculars became insufficient; I wanted to record these experiences for posterity. I looked into his fearful eyes. He would stare, then fly around his nest, repeating the pattern every few minutes. Until finally, he calmed himself and became as curious about me as I was about him. It happens when we show the creature we mean no harm; when we respect nature and conduct ourselves with humility. I prayed to see his like again. Of all the raptors I had seen even before I became a birder and photographer, he was the most sublime. Yet we do them an incredible disservice.

Urbanization, Air Pollution and the Impact on Bird Populations

I first became aware of the injustices and harms of urbanization when I went birding along the shores of Lake Ontario. The factories along the Great Lakes spew industrial contaminants into the air and the water, leaving all manner of debris along the shorelines. The Great Lakes are no longer as pristine as they were fifty years ago. Along Toronto’s Tommy Thompson beach, there can be found bricks, metal piping, and garbage deposited by the waves. Sanderlings forage the shores and trash for nesting material. The stench of human waste and floating trash can be seen in Hamilton’s marina. Yet some of nature’s most impressive birds, greater egrets, blue herons, and double-crested cormorants make their homes along the shores here. These cormorants have made their way as far north as my old stomping grounds, Lake Simcoe and Kempenfelt Bay.

Until this year, I did not know that birds such as Double-Crested Cormorants, Hooded and Common Mergansers, Buffleheads, and Common Goldeneyes, made their way to my home region. Cormorants will typically live along oceans and make a living from North America’s coastlines to as far out as two hundred miles at sea. I knew of their migration towards the Great Lakes regions but did not expect to find them along Lake Simcoe, a medium-sized lake occupying central Ontario, between the two Great Lakes Huron and Ontario. There is ample scientific evidence to suggest why birds like the cormorants may migrate to previously unfamiliar territories.

“The most common air pollutant is carbon monoxide,” caused “by the burning of gasoline, natural gas, coal, oil,” which leads to “abnormal breathing (in) birds as it directly affects their nervous system.”

The burning of sulphur-producing fuels “impairs the immune system of birds and makes them vulnerable to diseases. Moreover, the emissions from coal plants also decrease their erythrocytes or red blood cells.” Heavy industrial metals such as copper, nickel, and lead cause exposed bird populations to lay “much fewer eggs” and impact the “hatching success of their eggs.” As air pollution thins tree canopies, it renders birds more “vulnerable” to predation.

Birds teach us much about the natural world. They also teach us much about the urban world; a place where people care little about the lives of others and place their own needs and pursuits above other people and life forms. The natural world is violent and cyclical; yet cities despoil the environment, produce food shortages, and alter the environment itself. The urban world has its own cycles, perhaps with a more significant impact than those of nature. How ironic that a few bird populations would flee the urban-riddled areas in the hopes of escaping whatever compelled them to flee in the first place. Perhaps such observations about wildlife granted ancient cultures wisdom we are starting to lack today.

How fortunate, then, to take up birding and wildlife photography, while one still can.

“Impact of Air Pollution on Birds: How the Soul Returns to its Ancestors”

Impact of Air Pollution on Birds: How the Soul Returns to its Ancestors, #birding, #birdsNorthAmerica, #BirdsOntario, ##ancientEgyptMythology, #EnvironmentalDamage; Click To Tweet

What dog breed do you have?