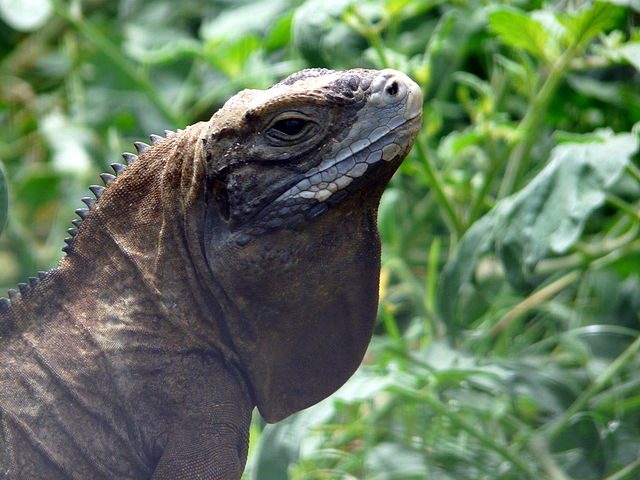 The Jamaican iguana (Cyclura collei) is a large species of lizard of the genus Cyclura endemic to Jamaica. It is the largest native land animal in the country and is now on the critically endangered list.  The Jamaican iguana was actually considered extinct between 1948-1990. Once found throughout Jamaica and on the offshore islets Great Goat Island and Little Goat Island, it is now confined to the forests of the Hellshire hills. 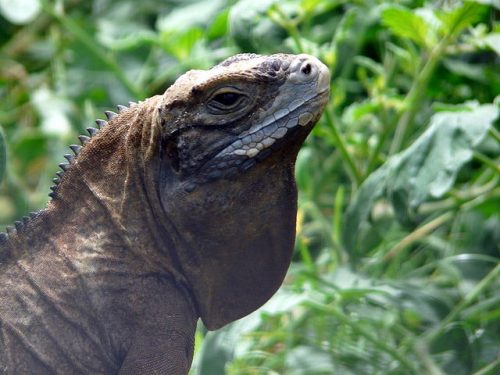 The Jamaican iguana is a large heavy-bodied lizard primarily green to salty blue in color with darker olive-green coloration on the shoulders.  Three dark broad chevrons extend from the base of the neck to the tail on the animal’s back, with dark olive-brown zigzag spots.   The dorsal crest scales are somewhat brighter bluish-green than the body. The body surfaces are blotched with a yellowish blotched color breaking up into small groups of spots.  Wild individuals, particularly nesting females, often appear deep reddish-brown in color after digging in the course ferralic soils of the Hellshire Hills region.

Male Jamaican iguanas grow to approximately 428 mm (16.9 in) in length whereas females are slightly smaller, growing to 378 mm (14.9 in) in length.  Males also possess large femoral pores on the undersides of their thighs, which are used to release pheromones.   The pores of the female are smaller and they do not have a dorsal crest as high as the male’s, making the animal somewhat sexually dimorphic. 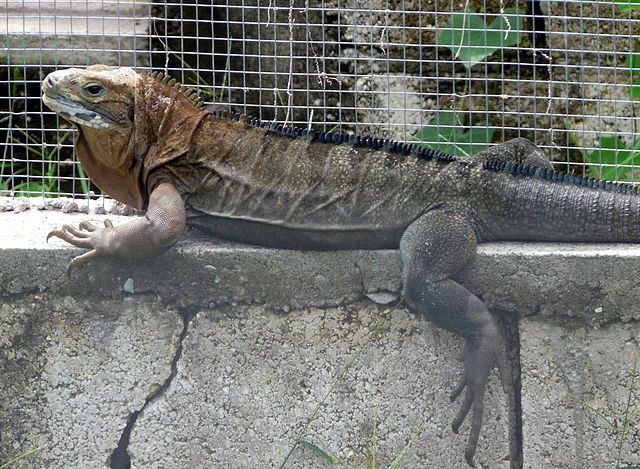 Iguanas were once common throughout Jamaica but declined dramatically during the second half of the 19th century, after the introduction of the Asian mongoose (Herpestes javanicus) as a form of rat and snake control, until it was believed to exist only on the Goat islands near the Hellshire hills.  The mongoose came to rely upon hatchling iguanas as a prime source of food, prompting the creation of a proposed program to eradicate the feral mongoose.

The Jamaican iguana was believed to be extinct in 1948.  A dead adult specimen was found in 1970.  The species was rediscovered in 1990 when a live iguana was captured by a hog hunter in the Hellshire hills.  A study showed that there were only 50 survivors left of the “rarest Lizard in the world.”  It is now listed as a Critically Endangered Species.

The Hellshire Hills area is the only area of Jamaica where this iguana is found. It is relegated to two dense populations that consist of scattered individuals. They were once prevalent on the island but are now only found in the dry, rocky, limestone forest areas of St. Catherine. Before it was rediscovered in 1990, the iguana was last seen alive on Goat Island off the coast of Jamaica in 1940. 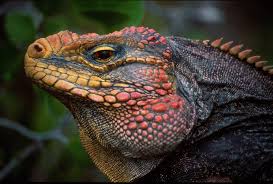 Like all Cyclura species, the Jamaican iguana is primarily a herbivore, eating leaves, flowers, and fruits from over 100 different plant species.  This diet is rarely supplemented with insects and invertebrates such as snails, which could simply be eaten incidentally while it consumes the leaves the invertebrates live on.

The biggest current threat to the animals’ existence is no longer from the spread of the mongoose but from the charcoal industry.  Charcoal burners rely on hardwood trees from the Hellshire Hills to make charcoal.  As this is the primary refuge for the iguanas, the burners have been threatening the research teams who protect the iguanas.

A consortium of twelve zoos, also from within the USA donated and constructed a Headstart Facility at Hope Zoo, used for the rearing of eggs and hatchlings brought from the wild. From within the safety of this environment, they are reared until they are large enough to survive in the wild and predators such as the mongoose are no longer a threat, a process known as “headstarting”. The Headstart facility also carries out health screening prior to the release of specimens. This health screening has been used to baseline the normal physiologic values of the species, identifying potential future problems due to parasites, diseases, etc. which might threaten the population.

The US captive population doubled in size in August 2006 with the hatching of 22 Jamaican rock iguanas at the Indianapolis Zoo. This was the first successful captive breeding and hatching outside of Jamaica.

Jamaican Iguana Thought to be Extinct Makes a Comeback 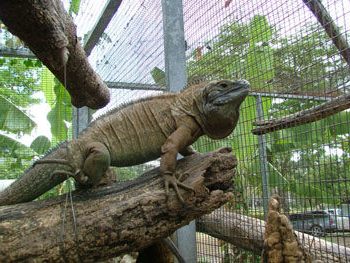 A SIMPLE QUESTION FOR YOU:

Do you love lizards?