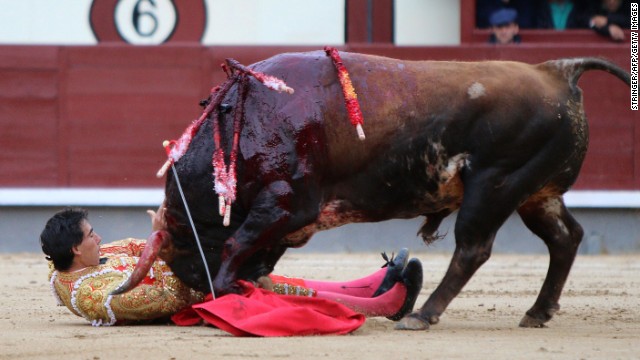 There is no happy ending to this story about the Madrid bullfight suspended after three bullfighters were injured and two bulls killed.  Except, of course, for the four beasts who left the “festivities” at the San Isidro Festival in Madrid alive and well and were allowed to return to their ranches unharmed.

This is How the Story Should Have Gone:

But This is How it Went Instead:

Confused?  Wow, right?  All this took place in front of a sold-out crowd of 24,000 at the historic bullring, as well as on national television.

THE GRAND SCORE:  Three injured Matadors vs. two dead bulls.  Who won?  Nobody.  (Just a reprieve, for the four bulls who were allowed to return to their ranches, for now.)

THE GRAND FINALE:  This left four more bulls that were supposed to “fight” (for their lives) that day, out of the usual six on the card. But, all bullfighters were gone to the infirmary, the authorities were forced to suspend the bullfight at the San Isidro Festival in Madrid for the first time in 35 years.

The San Isidro festival, named for Madrid’s patron saint, features 31 fights this year, from May 9 to June 8. It pays top dollar to the top bullfighters.

The three injured bullfighters are recovering in a hospital. The four bulls that didn’t fight are wiping the sweat off their brows, counting their blessings, and silently high-fiving each other.

MY QUESTION FOR YOU TODAY:  What do you think of Bullfighting?  Do you agree with me that they’re horrible and should be banned?