This video of when a diver loses thumb feeding Moray Eels is graphic, so consider yourself warned. The video goes on to show the healing process a few months afterward and followed up one year later after a toe amputation and subsequent attachment to the hand to be used as a working thumb. Pretty amazing, really.

Moray Eels are often thought of as particularly vicious or ill-tempered animals. But in reality, morays hide from humans in crevices and would rather flee than fight. They are shy and secretive and attack humans only in self-defense or mistaken identity. Most attacks stem from disruption of a moray’s burrow (to which they do react).

As you saw in the video (if you dared to watch it), attacks can sometimes happen if hand-feeding Morays, which is never a good idea but is often offered by dive companies to attract tourists. Moray Eels have poor vision and rely mostly on their acute sense of smell, making distinguishing between fingers and hand-held food difficult.  Because of several occurrences of this, the hand-feeding of Moray Eels has been banned in some locations, including the Great Barrier Reef.

Moray Eels’ heads are too narrow to create the negative pressure most fishes use to swallow prey. 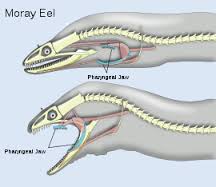 Possibly because of this, they have a second set of jaws in their throat called pharyngeal jaws, which also possess teeth (like tilapia). When feeding, morays launch these jaws into the mouth, where they grasp prey and transport it into the throat and digestive system. Moray eels are the only animals that use pharyngeal jaws to capture actively and restrain prey.  Larger morays are capable of seriously wounding humans.

The moray’s rear-hooked teeth and primitive but strong bite mechanism also makes bites on humans more severe, as the eel cannot release its grip, even in death, and must be manually pried off. While the majority are not believed to be venomous, circumstantial evidence suggests a few species may be.

Books about OCEAN LIFE on Amazon

There are approximately 200 species of Moray Eels, almost all of which are exclusively marine, but several species are seen regularly in brackish water, and a few, can sometimes be found in freshwater.  The largest species are found at reefs in warm oceans. Very few species occur outside the tropics or subtropics.  The Eels live at depths to several hundred meters.

The smallest Moray Eel is likely Snyder’s moray (Anarchias leucurus), with a maximum length of 11.5 cm (4.5 in).  The longest species, the slender giant moray (Strophidon sathete) reaches up to 4 m (13 ft). The largest, concerning total mass, is the giant moray (Gymnothorax javanicus), which reaches 3 m (9.8 ft) in length and 30 kg (66 lb) in weight.

Morays are carnivorous and feed primarily on other fish, cephalopods, mollusks, sea snakes, and crustaceans. Groupers, Barracudas, and sea snakes are among their few predators. 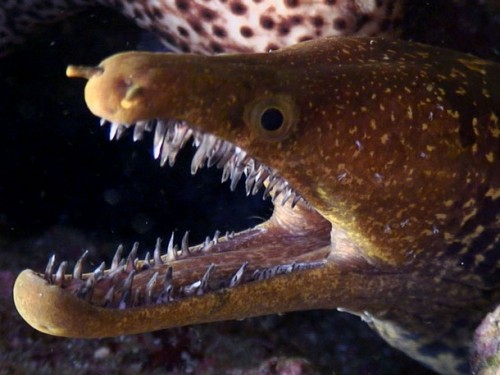 A Tiger Moray Eel with its jaws open. The Tiger Moray is distinctive for its bright yellow coloring and elongated jaw, which is filled with a large number of long “glasslike” teeth. It can reach up to 120 cm in length. 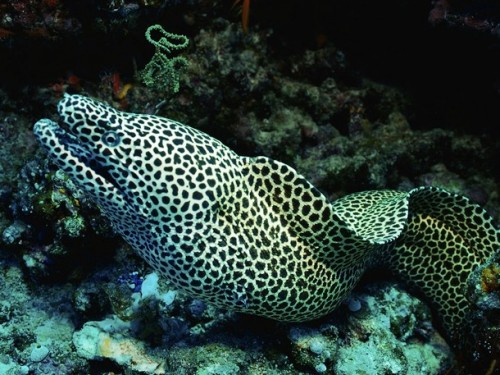 A Honeycomb moray eel swimming near the rocky bottom of the ocean floor. There are more than 200 species that inhabit tropical and subtropical seas across the planet.

Have you ever seen such a thing as the Moray Eel?  Looks like an alien species, doesn’t it?  Would you be brave enough to try and feed one?

3 thoughts on “Diver Loses Thumb Feeding Moray Eels, Not for the Squeamish”