Yes, I know, you’ve already seen lots of pictures of unlikely animal friendships on Facebook and Twitter. But have you seen this video?  It’s really short, only a little over a minute long. You can spare that, can’t you? Take a look.

Having had a lot of experience with animals, both domestic and wildlife, I have seen a lot of unlikely animal friendships over the years.

At one point in my life, we had:

And guess what? They all got along nicely, thank you very much.

One dog I had years ago, Li Jing, was surely a nurse in another lifetime. Any sick or dying animal that found its way into my home (and there were many), would have Li Jing watching over it. She would sleep beside them at night, come and wake me up if one fussed and needed its every-3-hour-feeding. Li Jing would have baby animals curled up inside her thigh, as if she was a momma hen or something.

I wish I had a picture of Li Jing handy, but I don’t. That was before the days of digital cameras. I’ll have to find them and do some scanning.

Videos of unlikely animal pairs playing or being cozy have become so common that they are piquing the interest of some scientists, who say they invite more systematic study. Among other things, researchers say:

the alliances could add to an understanding of how species communicate, what propels certain animals to connect across species lines and the degree to which some animals can adopt the behaviors of other species.  Source: New York Times

To learn more about what the scientist’s are thinking, read the New York Times article, “Learning From Animal Friendships.” It’s an interesting article and I can’t wait to read their findings.

Meanwhile, I hope you enjoyed the video and it brought a smile to your face, and warm fuzzy feelings into your heart. 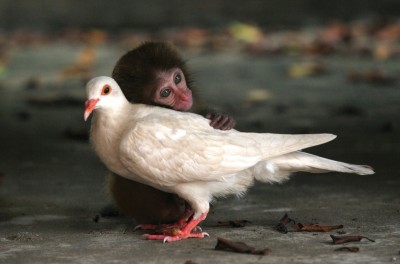 This macaque and dove lived together in an animal protection center off the coast China.
They ate, played and slept together for two months, before being released into the wild.