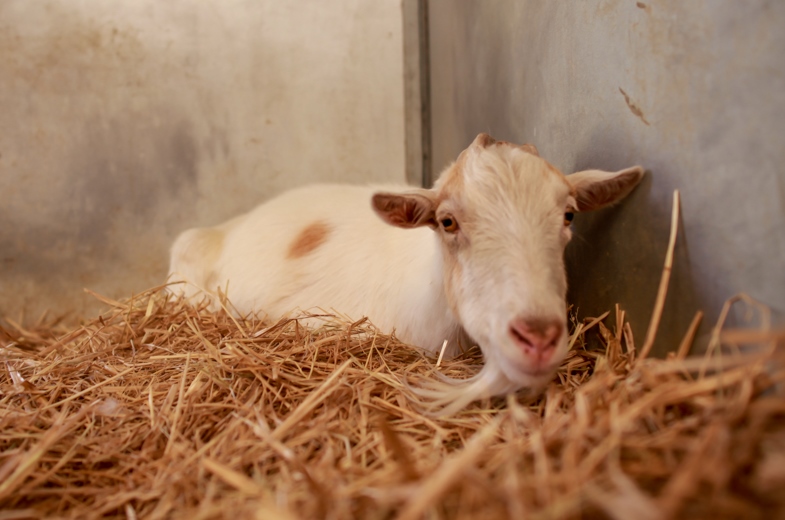 This video and story of Mr G and Jellybean are sure to leave you with a warm, fuzzy feeling.  Or a tear.  Or goosebumps.  Any and all of those.  Watch to see how this was a life-saving reunion.  Enjoy!

Mr. G, the goat, and Jellybean, the burro were each rescued from the place where they had lived together for almost a decade – the property of a woman who could barely take care of herself, never mind the dozens of dogs she hoarded and three barnyard animals.  Mr. G and Jellybean were each taken to different rescue adoption centers in order to save their lives.

It soon became apparent, however, that there was a problem.  After arriving at the Animal Place’s Rescue Ranch adoption center, Mr. G, the goat, began to show signs of serious depression.  Mr. G refused to eat and spent his days lying in a corner of his stall, barely lifting his head. Staff tried every treat  – molasses, sweet grain, apples, wetting down food… but nothing worked. 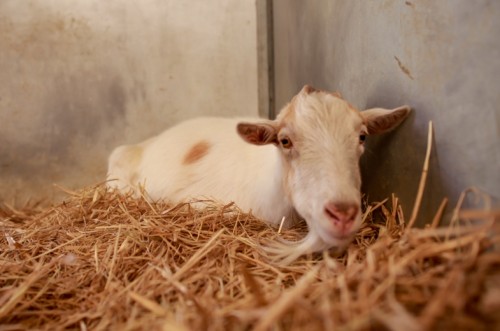 Examinations showed nothing physically wrong.  It became evident that Mr. G was in mourning, assuming his friend Jellybean had disappeared forever. He was inconsolable. After four days of starving himself, drastic actions were taken to help Mr. G.  No one had any idea of the bond Mr. G and Jellybean had shared.

It was time for Jellybean to come home.  A volunteer at the Rescue Mission that had taken the burro volunteered to drive 14 hours to bring Jellybean to be reunited with Mr. G.  After three more days of planning, Mr. G and Jellybean were together again.

The video shows the moment when Mr. G first heard Jellybean.  He immediately perked up, stood up, and went outside to investigate.  The change in his demeanor is astounding!  He rushed over to Jellybean and wouldn’t leave her side.  Within 15 or 20 minutes, Mr. G and Jellybean were eating side by side, out of the same bowl.  This after Mr. G’s hunger strike!

Oh, what a sight to see!

Never doubt the depth of emotions of animals.  Mr. G’s grief was as deep.  His joy at reuniting with Jellybean is obvious and as beautiful and inspiring as a human’s.

Instead of placing the two up for adoption, Animal Place welcomed Mr G and Jellybean as permanent residents at their 600-acre Grass Valley sanctuary. Their story will live on, inspiring and teaching visitors about nonhuman emotions. 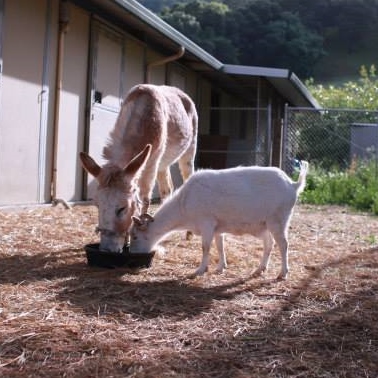 Want to know how you can help animals like Mr G and Jellybean?

Share the video! Mr. G and Jellybean have a powerful story to tell. Help them out by sharing their video showing that other animals experience a wide range of emotions similar to humans, dogs, and cats.

Go Vegan: The most powerful act you can take is recognizing that Mr G and Jellybean have value outside of any human desire to eat or use them for human purposes. You can reinforce that belief by adopting a vegan lifestyle. Start by signing up for our Sanctuary Sweets recipe list! Encourage your friends and family to do the same!

Help us get a new trailer! You may have noticed the rusty trailer Jellybean arrived in…we could use your financial support in purchasing a new one to replace the 25-yr-old trailer they are currently using!

Volunteer and donate: Support the efforts of your favorite animal rights organization through volunteer or financial efforts. Run a marathon and ask people to sponsor you. Host a bake sale and send the proceeds to your favorite group. Donate your time. And whenever possible, give financially. All efforts matter.

SOURCE:  Credit goes to Animal Place/First Spark Media. Any specific inquiries or interview requests can be sent to info@animalplace.org

SEE ALSO:
4 Unusual Animal Friendships, Why Can’t We All Just Get Along?


Disclosure: Animal Bliss is an Amazon.com affiliate and will earn a (very small) commission from purchases made through links on this website.