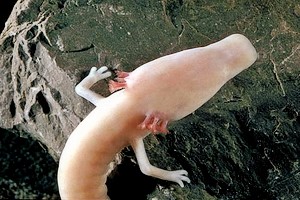 The Olm blind cave salamander is found exclusively in the underwater caves of southern European lakes and rivers, including Italy, Slovenia, Bosnia, Croatia, and Herzegovina.

The olm are part of an ancient lineage of amphibians evolving independently for 190 million years. They are now threatened by rising levels of water pollution and habitat disturbance.  Their populations are declining and are now considered to be vulnerable to extinction in their native environment.

I hope you have enjoyed, “ O is for Olm Blind Cave Salamander”

What did you enjoy learning the most about the Olm Blind Cave Salamander?

3 thoughts on “O is for Olm Blind Cave Salamander : A-Z of Cool Animals”