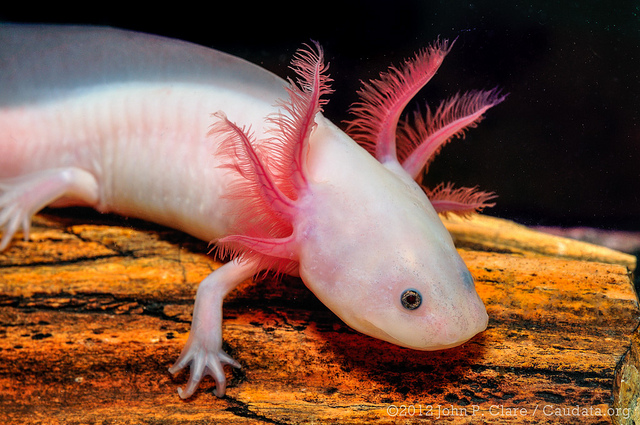 The Axolotl Salamander (Ambystoma mexicanum) (pronounced ACK-suh-LAH-tuhl) is a medium-sized amphibian that is native to lakes close to Mexico City. It is most closely related to the tiger salamander which inhabits the waters in a similar region of Mexico.  It is also known as the Mexican Walking Fish, although it is an amphibian, not a fish.

The Axolotl is neotenic, which means that they reach adulthood without undergoing metamorphosis.  They do not go from larval to an adult form.  Instead of developing lungs and taking to land, the adults remain aquatic and gilled. The gilled larval form becomes sexually mature and reproduces.  Axolotl salamanders live their entire lives in water, never emerging onto land.

Axolotl salamanders have a flat-shaped, broad, head that is much wider than the body.  They have feathery gills which protrude from either side of the head, allowing the axolotl to breathe underwater.  Axolotls are able to regenerate limbs that become damaged or detached from their bodies.  Most axolotls reach about 10 inches total in length, from the tip of the nose to the end of the tail.

Axolotls have been known to live past 20 years, but it is unusual to find an individual older than 10 years.

The axolotl salamander is most commonly found in albino form as they spend a lot of their lives hiding under rocks and in crevices on the bottom of the lake. Although axolotls are generally white or pink in color, black, grey and brown colored axolotls can also be found. 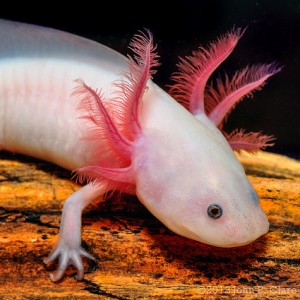 The axolotl salamander is a carnivorous animal. It will eat worms and insect larvae that develop under the surface of the water, along with mollusks, crustaceans and some small species of fish.

Due to the bottom-dwelling lifestyle of the axolotl, it has surprisingly few natural predators. Birds and large fish are the most common predators of the axolotl along with humans who catch the axolotl to keep as pets in artificial environments.

The axolotl salamander can live for up to 25 years, although the average axolotl rarely gets much older than 15 years of age.  Females can lay anywhere from 100 to 1,000 eggs.  These eggs are coated with a sticky substance that helps them to stick to plants and rocks in the water to keep them safe. After about a month of development, tiny axolotl babies emerge into the open water. 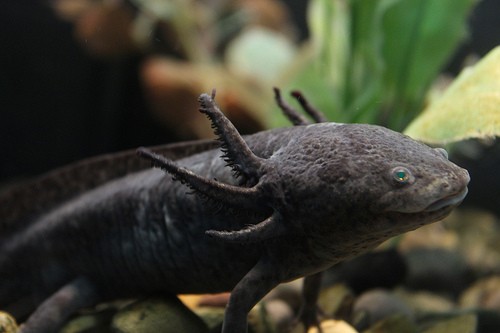 Some axolotl salamanders are available as freshwater aquarium pets from breeders but they may be difficult to come by. They are a hardy creature can be expected to live up to 10-15 years with attention to proper care, particularly with respect to water quality. Their skin and gills are very sensitive and quite soft, so handling is not recommended.

Fairly recent urbanization in Mexico City and its consequent water pollution is the most destructive factor in the survival to the axolotl.  Axolotls have been used extensively in scientific research due to their ability to regenerate limbs.  Axolotls were also sold as food in Mexican markets.

Since 2010, axolotl salamanders are currently listed by CITES as an endangered species and by IUCN as critically endangered in the wild.

A four-month-long search in 2013 turned up no surviving individuals in the wild.