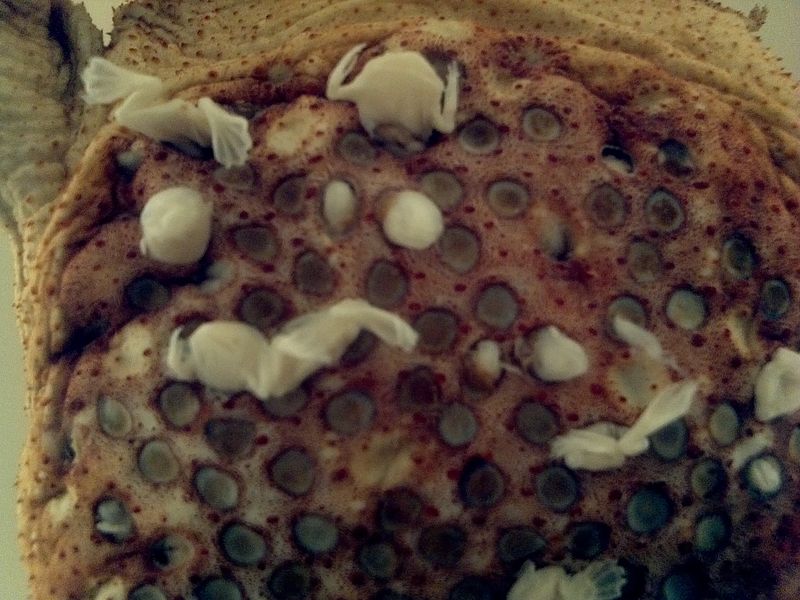 Trypophobia is the pathological fear of objects with irregular patterns of holes, such as beehives, ant hills and lotus seed heads. 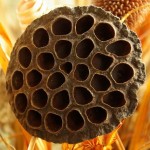 What does this have to do with the Common Suriname Toad birth?  If you’re Trypophobic … everything!  I say this because the Suriname toad birth comes right out of the holes on the mother’s back. Check this out!

The common Suriname toad or star-fingered toad (Pipa pipa) is a species of frog in the Pipidae family, native to tropical South America, where it is found from Suriname and Guyana south through a wide area of the Amazon basin, including Brazil, Bolivia and Peru.  It can also be found n the Caribbean, in the southern and eastern parts of the island of Trinidad

The common Suriname toad is quite flat, with broad webbed feet and front toes with small, star-like appendages which are used for finding food. The average size of a Suriname toad is about 4-5 inches (10-13 cm). Its eyes are minute, it has no teeth, and no tongue.  Strange!!!

They live an aquatic lifestyle, and can stay underwater for up to an hour without surfacing for air. Their brownish black coloring allows them to camouflage themselves against the dark mud of its watery home.  Its eyes are positioned upwards and they’re able to see in all directions.

During the mating season, the males woo the females by snapping a hyoid bone in the throat which makes sharp clicking sounds. The males grasps the female in a position known as amplexus.  For the next several hours, the two toads perform somersaults in the water.

At the point in the somersault when both toads are on their backs, the female lays between 3 to 10 eggs, which then fall onto the belly of the male. As the male loosens its grip slightly, the eggs roll onto the female’s soft, spongy back, to which they adhere and become embedded in the skin.  The male then fertilizes the eggs.  This process is repeated up to 18 times, with between 60 and 100 eggs being laid in total.

After all the eggs are laid, the male swims away.  The skin on the female’s back begins to swell and grow around each egg, completely engulfing them.  These are known as brooding pouches.  The tadpoles incubate there for the next 3 or 4 months.

Now is when the ingredients for a real horror story sets in, or when phobics run away screaming …. When the time is right, the Suriname toad births fully developed toads, which crawl out of the holes on the mother’s back.  By that time they’re less than an inch long (2 cm), and are ready to begin a largely solitary life.

This just gives me the willies!

It is thought that the Suriname toad can live for between seven and ten years, or possibly longer.

The Suriname toad is classified as Least Concern (LC) on the IUCN Red List.

Although the Suriname toad is not considered to be at risk of extinction, it is thought that habitat loss and degradation as a result of logging and other human activities could affect and threaten local populations of this species.  In addition, the Suriname toad is known to be collected from the wild to be sold in the pet trade.

I hope you have been completely grossed out by the “Freaky Suriname Toad, a Trypophobic’s Worst Nightmare”