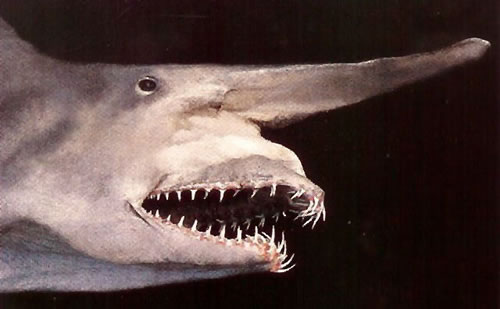 Carl Moore has been a shrimper for 50 years.  He recently told KeysNet.com, “I never seen something so ugly in my life.” He went on to say the shark’s teeth “were so wicked looking” that he told his crew not to go anywhere near it.

The April 19 catch was announced Friday because it was just brought to the attention of the National Oceanic and Atmospheric Administration, The Houston Chronicle reported.

The pink shark was estimated to be about 18-feet long.  It is a bottom-dwelling shark and is rarely seen at the surface or in shallow coastal waters.  This fish was reportedly pulled in with a barrel full of shrimp about 2,000 feet below the surface.

Most specimens are found off Japan or in the Indian Ocean and around South Africa.   NOAA Fisheries Service reported this was only the second goblin shark of record in the Gulf of Mexico. The first was captured on July 25, 2000, by commercial fishermen in more than 3,000 feet of water.


The fisherman, Mr. Moore,  told the Houston Chronicle via SFGate that he didn’t know what it was, and that he “didn’t get the tape measure out because that thing’s got some wicked teeth, they could do some damage.”

So Moore instead took photos of the beast, winched it over the side of the boat, and released the bizarre-looking fish, which swam away.

Scientists were grateful the prehistoric-looking goblin shark was released alive, but disappointed over not being able to examine it and learn more about it.

“We don’t even know how old they get, how fast they grow,” NOAA shark expert John Carlson told the Chronicle.

Moore, who called the catch the highlight of his 50 years of shrimp fishing, said NOAA told him that “I’m probably one of the only 10 people who’ve seen one of these alive.”

According to the department of Ichthyology at the Florida Museum of Natural History, goblin sharks, also known as elfin sharks, are widely distributed globally, though few are caught because of their deep-water residence.

Goblin sharks are said to be the only living member of the Mitsukurinidae family, a lineage said to be 125 million years old.

Obviously they are distinct for their unusual head, with an elongated, flattened snout and protruding jaw with sharp rows of teeth.

I hope you have enjoyed, “Rare Goblin Shark Caught in Gulf of Mexico 18 Feet Long Released“

You might also like to read, 8 Amazing Animal Defenses That You Will Not Believe Until You See Them