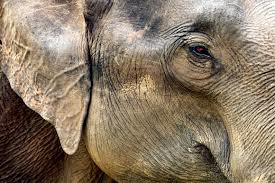 One of a Kind 12 Bar Blues Piano Duet

Watch when Peter the elephant plays piano using his trunk in a spontaneous duet session of 12 bar blues with Paul Barton in Thailand.  It’s delightful.  Keep your eyes open for the other elephant shaking his (or her) booty.  So fun!  I just love elephants, don’t you?

Well, do you love that as much as I do?  I can’t help feeling what an honor it must be for Paul to play for these elephants. The elephants are blind, by the way, and live in a sanctuary on the mountains of Kanchanaburi, north-east of Bangkok.

In answer to some questions Paul was asked about the welfare of these elephants, he explained that:

* The person standing beside Peter the elephant is “Pat”.  Pat is Peter’s mahout, which is a person that devotes his or her life to looking after an elephant, usually in Asia. This is a dangerous job.  Pat is Thai.

* Pat is responsible for Peter’s well-being, day and night, all year round. Pat’s daily duties include keeping Peter safe from other bull elephants as well as looking after visitors to Peter’s home at the Royal Elephant Kraal in Ayutthaya, Thailand.

* Pat and Peter have a special bond.

* Pat is not reading a magazine in this video, he is filming with his tablet.

* Pat is not prodding Peter, he is just reminding him not to get too carried away and smash the piano keys with his heavy trunk as he has, unintentionally, on previous occasions.

* The chain around Peter’s neck is flimsy. It is there so Pat can walk at Peter’s side and guide him occasionally around vehicles or other potentially harmful bull elephants on the way to bath and drink in the river, for instance. Those with experience working with elephants in Thailand know this flimsy chain is no restraint to an elephant whatsoever. It is not there to cause Peter any harm, just the reverse.

* Peter has NOT been trained to play piano. This video is Peter’s spontaneous reaction to a piano during a brief encounter one evening between Peter and Paul Barton, a visiting pianist to the elephant Kraal where Peter lives.

* Piano keys are no longer made of ivory. The piano in this video has plastic keys. All piano keys are made from synthetic polymers and plastics. The use of ivory for piano keys decreased dramatically after World War II and thankfully stopped altogether in 1989 with the CITIES worldwide ban on ivory trade.

Paul Barton is a 50-year old British classical and contemporary pianist in association with FEURICH, Vienna and La Pédale Harmonique, Paris.  He studied Fine Art at Royal Academy of Art, London.  He is a freelance artist and musician, and is married to Khwan Barton, a wildlife artist.

Paul Barton is known to have dragged a piano up a mountain in Thailand so he could play Beethoven for blind elephants.  He claims to have achieved a long-held ambition as he sat behind his piano, just a few meters away for the graceful giants, calmly playing his instrument. Even with a bad back, he felt that he “wanted to make the effort so I could feel like I had undergone a personal challenge.”

“It was a 50th birthday present to myself.  My wife and I have been working with blind elephants for many years, and I thought it might be something they would enjoy to listen to.

Yorkshire-born Paul moved to Thailand 16 years ago with his wife to be closer to the elephants.


This video is one of a series in “Music for Elephants”. There are 23 videos with piano and elephants in this playlist http://www.youtube.com/playlist?list=…

Photos playing piano for elephants in Thailand here:
https://plus.google.com/u/0/photos/11… There are other similar albums on this Goggle+ account.

MY QUESTION FOR YOU TODAY   Wow, right?  Have you ever seen anything like this?  Do you love elephants as much as I do?  I think I missed my calling.  I was meant to work with wild animals.  Would you love that too?

Disclosure: Animal Bliss is a Tote Tails affiliate, and will earn a (very small, teeny tiny) commission from purchases made through links on this website.