Warning: call_user_func_array() expects parameter 1 to be a valid callback, class 'collapsArch' does not have a method 'enqueue_scripts' in /home/customer/www/animalbliss.com/public_html/wp-includes/class-wp-hook.php on line 307
Interesting Facts about the Banded Palm Civet - Animal Bliss Skip to content 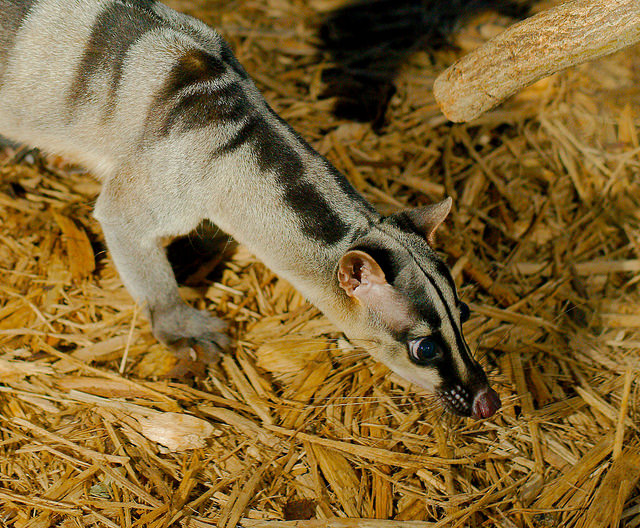 The banded palm civet (Hemigalus derbyanus), also called the banded civet, is a rare species of civet found living in tropical jungles and rainforests throughout much of south-east Asia including Burma and Thailand, and throughout most of Malaysia and Indonesia. 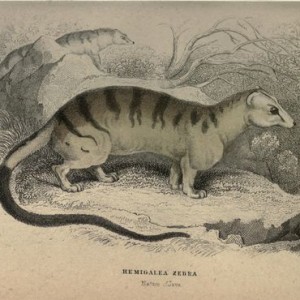 The banded palm civet has a long pointed face, with a long long body on short legs,  There are five toes on each foot with sharp, retractable claws.  The hair on its neck points upwards instead of down along the neck.  Banded Civet has short, dense fur that is generally a dark cream/buff color with four to five dark bands on its back. Its tail has two dark bands and the latter half of the tail is dark brown to black. There is a dark brown stripe that extends down the length of the top of the muzzle, and two stripes that extend from the top middle of the eye to the inside corner of the ears. There are two areas of white above and below each eye, and the muzzle is darker than the rest of the face.  Wikipedia 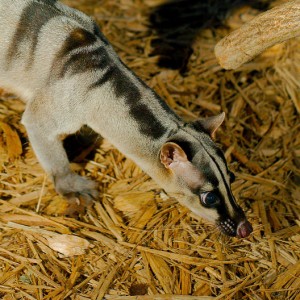 The banded palm civet has a cat-like appearance and behaves like a cat, but it is not feline.  They are more closely related to other small carnivores including weasels and mongooses.

The banded palm civet is solitary nocturnal animal, only making an appearance to hunt and catch food.  Though it lives in the forests, it spends much of its time on the ground, although they have been known to climb up into the trees in search of food or to hide from predators, which may include tigers and leopards, large snakes and crocodiles.

The civet is highly territorial and relatively ferocious.

The banded palm civet is a carnivorous animal and can survive on a meat-based diet of rodents, lizards, snakes, frogs and insects.  They have also been known to eat the fruits and flowers of palms, mangos and coffee in their natural habitats. 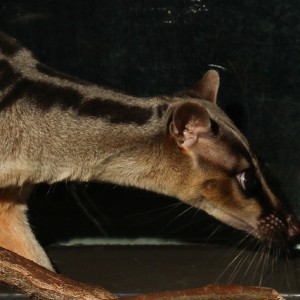 The female banded palm civet usually gives birth to up to 4 young after a gestation period that lasts for a couple of months. The babies are weaned by their mother until they are strong enough to fend for themselves. Banded palm civets can live for up to 20 years, although most rarely get to be this old.

Banded palm civets have been drastically affected by increasing deforestation in their native regions, causing much habitat loss.   It is listed as Vulnerable because of an ongoing population decline, estimated to be more than 30% over the last three generations, caused by over-exploitation, decline in habitat quality, and habitat destruction and degradation.

11 thoughts on “Interesting Facts about the Banded Palm Civet”