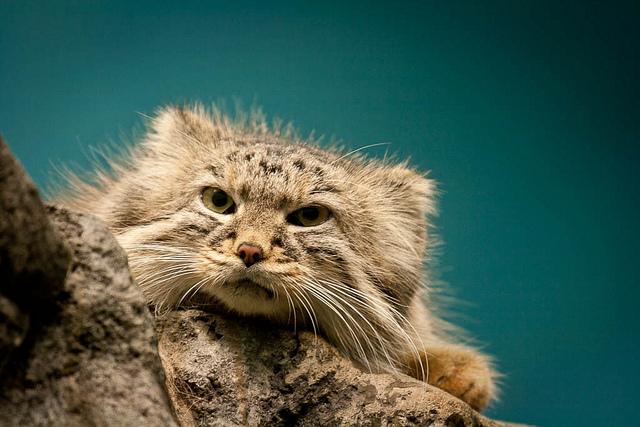 Did you see the video?  On Facebook?  There was this beautiful wildcat that I had never seen before.  I had to ask around to find out what it was.  Turns out to be a Pallas’s Cat, otherwise known as a Manul.  So I did some research on it, of course, and here I am, wanting to share with you rare pallas cat facts that I’ve discovered.  Here’s the video I initially saw.  Enjoy!

It is thought that the small Palla cat, along with one other species, a Martelli’s cat, were the first two modern cats to evolve.  The Martelli’s cat has since become extinct.  This, indeed, makes the Palla’s cat very rare.  The Palla’s cat was named after the German naturalist, Peter Simon Pallas, who first described the cat in 1776.


It can be found in the grasslands and steppes of Central Asia, from western Iran to western China preferring the cold and arid conditions this area provides, and at elevations up to about 15,000 feet. 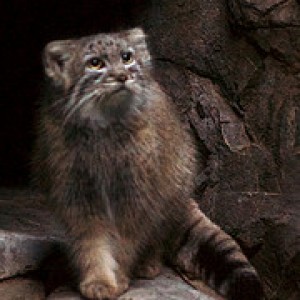 Its fur is ochre with dark vertical bars on the torso and forelegs. The winter coat is greyer and less patterned than the summer coat. There are clear black rings on the tail and dark spots on the forehead. The cheeks are white with narrow black stripes running from the corners of the eyes. The chin and throat are also white, merging into the greyish, silky fur of the underparts. Concentric white and black rims around the eyes accentuate their rounded shape.

The legs are proportionately shorter than those of other cats, the ears are set very low and wide apart, and it has unusually short claws. The face is shortened compared with other cats, giving it a flattened face. The pupils are circular. The shorter jaw has fewer teeth than is typical among cats, with the first pair of upper premolars missing, but the canine teeth are large.  Wikipedia

Look at those eyes!  If you look closely at the beautiful eyes of the Manul you will notice the pupils of the Pallas cat are round, more like a human’s, and not slit-like like we’re used to seeing in other cats.  Awesome, right?

The Pallas cat hunts by stalking and using ambush, their main fare being small rodents and birds, just like our modern domestic cat.

The Manul is a territorial creature.  Both male and female cats mark their territories of about 2 to 3 square miles.

It is a solitary creature too, and prefer to stay away from the company of others of its kind whenever possible, except during mating season.

Breeding season is very short, due to the extreme climate in the cat’s native range  Female Pallas’s cat’s are in estrus for only 26 to 42 hours.   Mating generally happens in February and March.

The manul’s gestation period of is 66 to 75 days.  Females give birth to a litter of about two to six kittens, usually in

April or May.  They very rarely just give birth to single kittens.  It is believed that the large litters are to compensate for a high rate of infant mortality in the harsh environment in which they live.

The kittens weigh around 90 g (3.2 oz) at birth, and have a thick coat of fuzzy fur, which is replaced by the adult coat after around two months.  These babies are expected to be able to hunt at sixteen weeks and are very much on their own and independent by six months, when they have reached adult size.

Although their life expectancy in the wild is unknown in captivity they have lived to over eleven years.

Pallas cats yelp or growl when excited, making a sound similar to a small dog.  They can also purr.

The rare cat is still being hunted, despite protection orders made by the various governments.   Before it was legally protected, tens of thousands of Manuls were hunted and killed each year, mostly for their fur.  International trade in manul pelts has largely ceased since the late 1980s. Hunting of this the manul is prohibited in all range countries except Mongolia, where it has no legal protection despite being classified as Near Threatened in the country.  Since 2009, the Pallas cat is legally protected in Afghanistan, banning all hunting and trade in its parts within the country and is listed as an endangered species. Because of their habitat degradation, prey base decline, and hunting, it has therefore been classified as Near Threatened by IUCN since 2002.