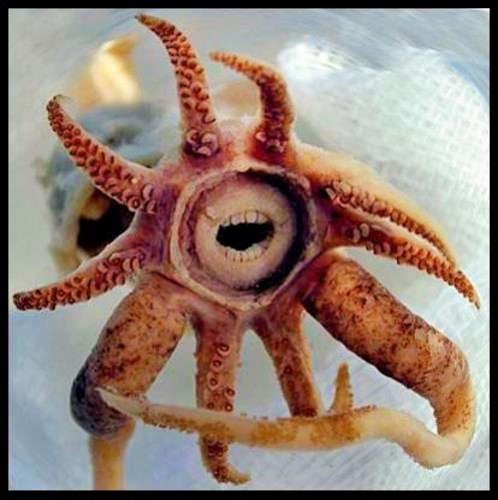 Squid with human-looking teeth? Add to that eight legs and two tentacles, and we’ve got one very odd-looking Promachoteuthis sulcus. This deep sea squid is the only specimen ever seen. It was found in 2007 by a German research vessel, R/V Walther Herwig, in the southern Atlantic ocean, at a depth of 5,740–6,560 ft (1,750–2,000 m).

As for the “teeth”, they’re not actually teeth at all, but circular, folded lips with only the upper and lower portions visible. Deep inside the mouth, it had a small razor-sharp beak, used to chop and chew prey.

It is distinguished from related taxa on the basis of several morphological features: nuchal fusion between the head and mantle, much larger size of arm suckers compared to club suckers, greater width of tentacle base than arm base, a recessed club base, and the presence of an aboral tentacle groove.

This squid was an immature female and only 1 inch (25 mm) long.