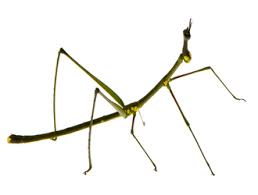 Stick Insects belong to the Phasmatodean Family. Other insects that also belong to the same family are leaf insects, ghost insects, and walking sticks. There are nearly two thousand and eight hundred species within the Phasmatodean family.  Stick insects belong to areas having tropical climates and some of them have wings. Stick insects that are kept as pets can grow up to four inches and can live up to one year.

Stick insects are so named for their effective camouflage among the woody plants where they feed. Some stick insects can change color, like a chameleon, depending on the background where they’re at rest. They’re typically brown, black, or green, with stick-shaped bodies that help them blend in as they perch on twigs and branches. Some even wear lichen-like markings to make their disguise more authentic. Stick insects imitate twigs swaying in the wind by rocking back and forth as they move. Stick insects may also wear bright colors on their wings, but keep these flamboyant features tucked away.

Among all the insects which are kept as pets, stick insects are the most desirable. Some of the favorites are Indian stick insects; Vietnamese thorny stick insects and pink winged flying stick insects. They are desirable because of their low-maintenance and unique appearance. Their surroundings in captivity should be similar to that of their native surrounding. The temperature and humidity should match almost exactly with their original habitat.

Food resources provided to stick insects should be close to the foliage available to them in their natural habitat. Blueberries are among the most favorable foods of stick insects. Other than that, they can be given raspberry, ivy, oak, privet, oak and hawthorn. These insects can be kept in a vivarium or circular jar, which has some holes on the top for air circulation. The length of the jar should be three times that of the insect and it should be tall in height. The holes shouldn’t be so big that the insect can escape from it. To be extra careful, a net can be placed over the holes to completely prevent them from escaping. The vivarium can be filled with ivy, bramble and privet.

The temperature within the jar should be maintained around 70 – 75° F.  At night the temperatures can be lowered to the 60’s. The humidity within the vivarium should be moderate. Stick insects are very fragile insects and should be handled with extra care. A covered water container can also be placed and the insect should be allowed to drink from it only under supervision, as the animal can fall in and and drown.

Stick insects shed their skin often, and can shed and regenerate their limbs at will to escape attacks by predators. Juvenile stick insects will regenerate the missing limb the next time they molt. In some cases, adult stick insects can even force themselves to molt again to regain a lost leg.

Once a nymph has molted, it’s vulnerable to predators until its new cuticle darkens and hardens. The castoff skin nearby is a dead giveaway to enemies, so the nymph will quickly consume the shriveled exoskeleton to get rid of the evidence. The stick insect nymph also recycles the protein by eating its molted skin.

When the insect sheds for the sixth time, it indicates that the insect has reached sexual maturity. All of the Indian stick insects are female as they reproduce by parthenogenesis or the eggs are laid and they do not need fertilization by a male.

Stick insects in the wild typically drop eggs randomly on the forest floor, leaving the youngsters to whatever fate befalls them. By spreading her eggs out, she lessens the chance that a predator will find all her offspring and eat them. Her eggs resemble seeds, so carnivorous predators will be less likely to take a closer look. Some stick insects actually make an effort to hide their eggs, sticking them to leaves or bark, or placing them in the soil.

Owners that are interested in breeding stick insects in captivity can spray water on the eggs and wait until they hatch. After the eggs are hatched, offspring can be managed with the help of paintbrushes. Sometimes the tail has some remains of the egg, which can be gently brushed off with the help of the paintbrush. Also, care must be taken to not to leave pools of water as there can be a chance of the insects drowning in them and dying. And owners that aren’t interested in breeding should completely destroy the eggs by boiling, burning, or crushing them.

Stick insects don’t bite, but they aren’t defenseless.  If threatened, a stick insect will use whatever means necessary to thwart its attacker. Some will regurgitate a nasty substance that will put a bad taste in a hungry predator’s mouth. Others reflex bleed, oozing a foul-smelling hemolymph from joints in their body. Some of the large, tropical stick insects may use their leg spines, which help them climb, to inflict some pain on an enemy. Stick insects may even direct a chemical spray, much like tear gas, at the offender.

When all else fails, stick insects will play dead. A threatened stick insect will abruptly drop from wherever it’s perched, fall to the ground, and stay very still. This behavior, called thanatosis, can successfully discourage predators. A bird or mouse may be unable to find the immobile insect on the ground, or prefer living prey and move on.

These insects should not be left out in the wild after being in captivity. Since they do not belong to the environment, there is a possibility that they can harm the ecosystem by reproducing young ones. Insects, which live in environments other than their natural habitats are known as pests. In United States, Indian walking stick insects are considered to be a plant pest. A special permit is needed to import them.

It’s Possible.  Do not go into any animal husbandry blindly,  It’s crucial that you take full responsibility for any other living being you decide to care for, WITHOUT EXCEPTION.  Once you get established … write me a note, send a story, and pictures too!

12 thoughts on “Stick Insects as Exotic Pets? Read this First!”