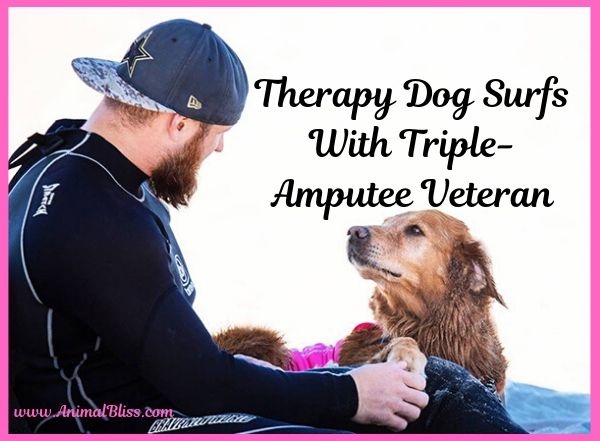 Richochet the therapy dog surfs with triple-amputee veteran with the help of a veteran with PTSD. This is the story of Richochet and two combat veterans inspiring others through adaptive surfing – proof of the healing power of dogs.

As Veteran’s Day approaches, certified therapy dog, Surf Dog Ricochet, Army Veteran, Jose Martinez and Marine staff sergeant Persons B. Griffith IV (Ret) AKA Griff, have joined forces to share their experiences in an effort to heal, change and save the lives of wounded warriors, veterans with PTSD, kids with special needs and others who face physical, emotional or cognitive challenges.

Every 65 minutes, a veteran takes their life by suicide. 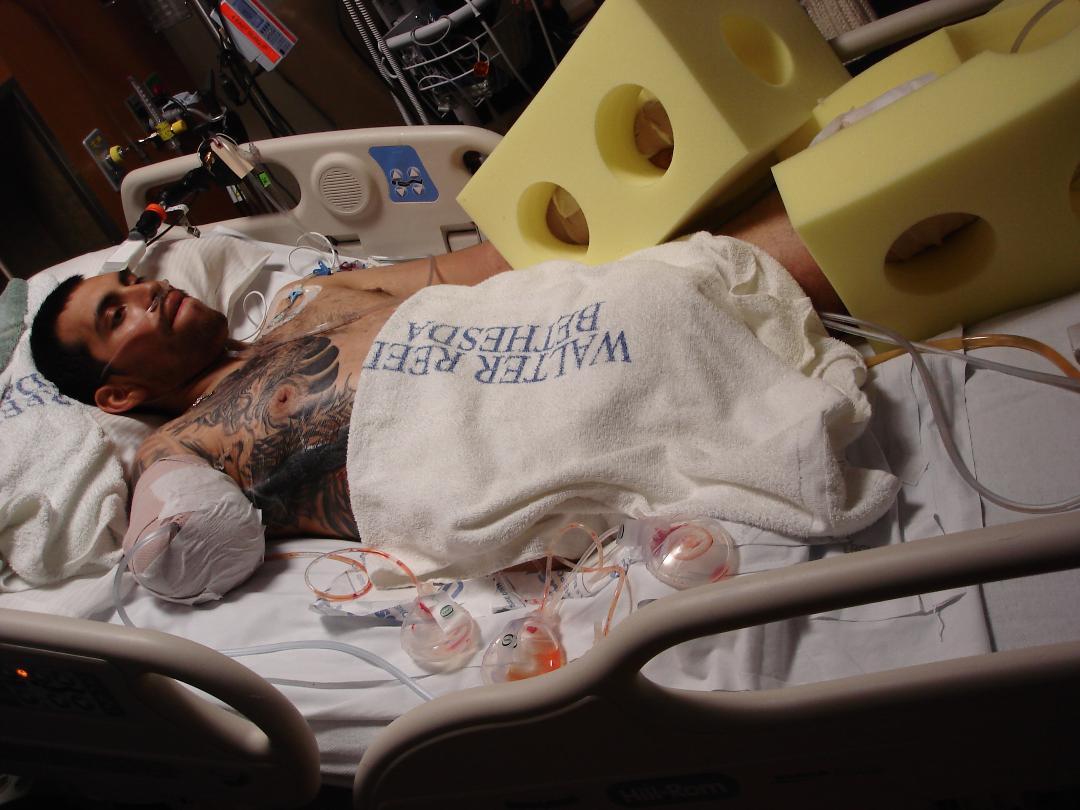 Jose became a triple amputee after stepping on a bomb in Afghanistan. The doctors told his unit he wasn’t going to make it. But he woke up from a coma ten days later. His road to recovery wasn’t easy, in fact, odds were against him. He spent 2 years in the hospital after the explosion and was told he would never walk again. 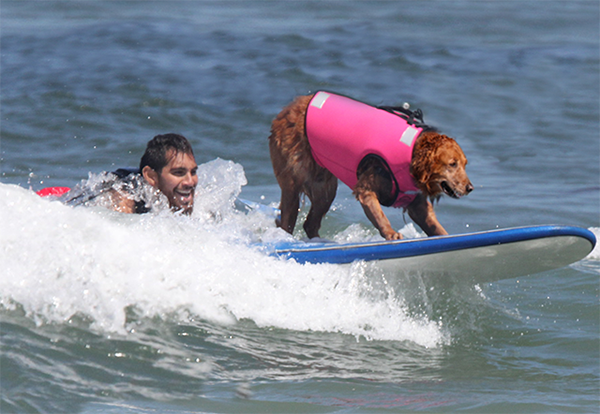 But this is Jose today! Catching a wave with Ricochet to inspire other wounded warriors, as well as anyone else struggling through life. 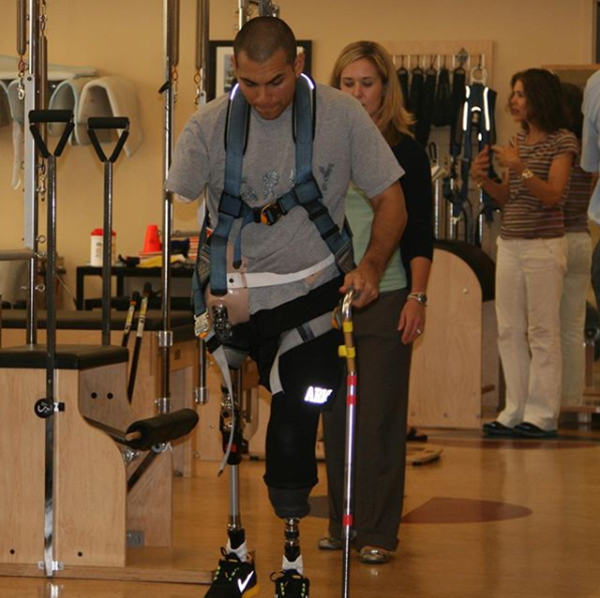 “After jumping out of my coma I was told the wheelchair was going to be my new set of legs! I cried for about a year thinking about it! I was told I wouldn’t be able to do a lot of things I used to do and would be limited to things I can do now. I told my self I would never let anyone tell me what’s possible and what’s impossible”, says Jose. 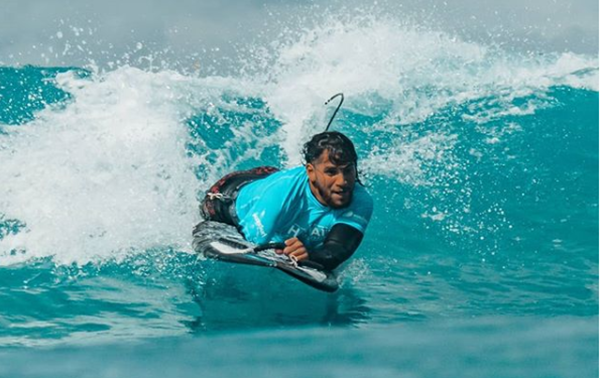 Jose is the first triple amputee hip disarticulate that surfs!! Not only that, he surfs competitively in adaptive surfing competitions! 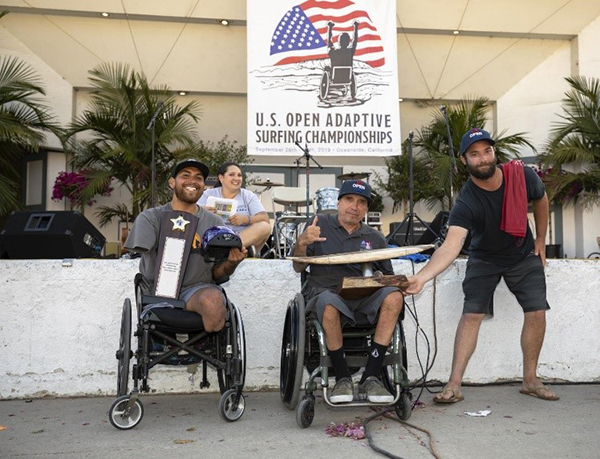 He has won several contests including Stoke For Life’s US Open of Adaptive Surfing! His goal is to make Team USA Adaptive Surfing Team and represent in the 2028 Paralympics. 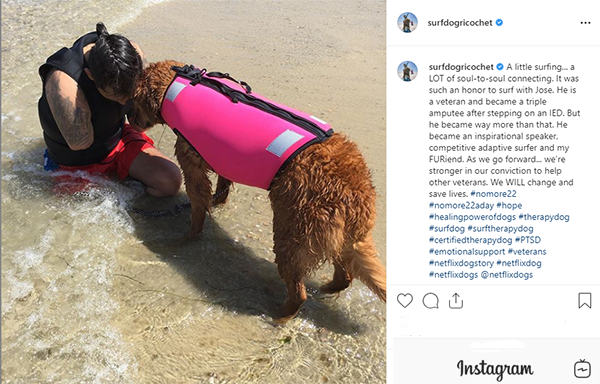 Ricochet sponsors Jose at competitions to cover expenses such as entry fees, accessible lodging, and transportation. Here, they are having a heart-to-heart before his heat begins! 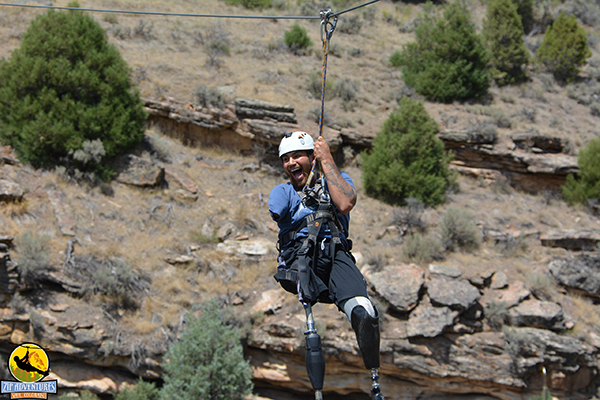 Jose also walks, fishes, swims, rock climbs and everything else he takes on. Click the video at the top of the page to see him in action! He’s also a motivational speaker who is showing the world the path to true happiness and self-fulfillment.

“But remember, the only way to win the battle on earth is to first defeat the battlefield inside ourselves.”, says Jose. 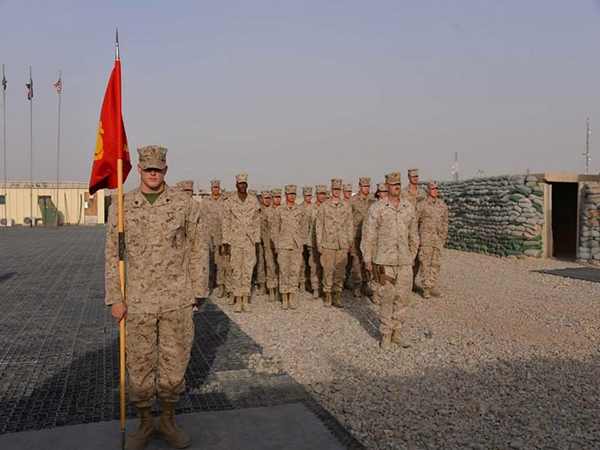 Griff served two tours in Afghanistan. When he returned home, he faced another battle – PTSD. He had tried many different therapies, but none of them worked until he met Ricochet through the Naval Medical Center San Diego and Pawsitive Teams canine therapy dog program. 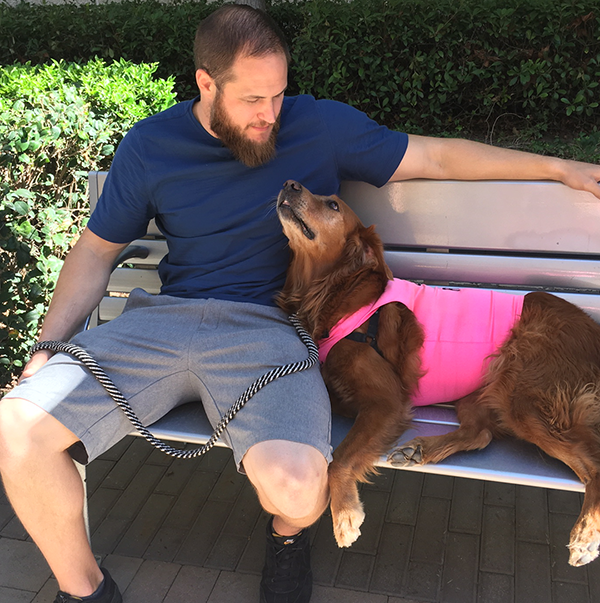 “Ricochet is like a mirror for me, it’s like she reaches in with both her paws, grabs what’s really going on inside of me, pulls it out, and the forces me to deal with it”, says Griff. “The last time I worked with her, she alerted to a mall security guard by leading me away from the area he was in. She took it a step further by guiding me behind a bench, where we were able to ‘take cover’ like I did when we took fire on the battlefield”.

Click here to see a video of this phenomenon!

Once they were away from the trigger, Griff was able to sit on the bench and calm his stress through eye contact and petting. Both of these actions release the hormone oxytocin in the brain, which helps reduce anxiety. 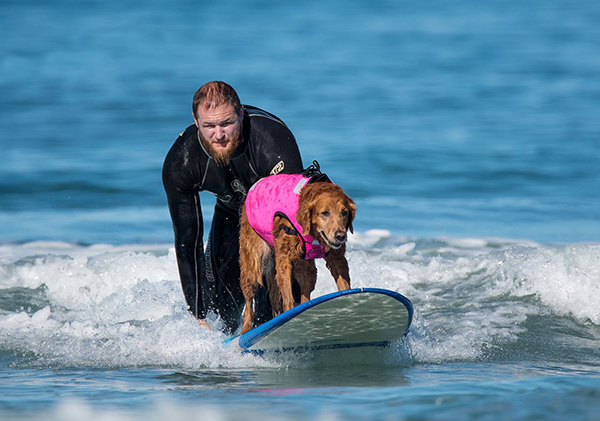 Griff gets on board with Ricochet’s canine-assisted surf therapy. His work with her is four-fold: 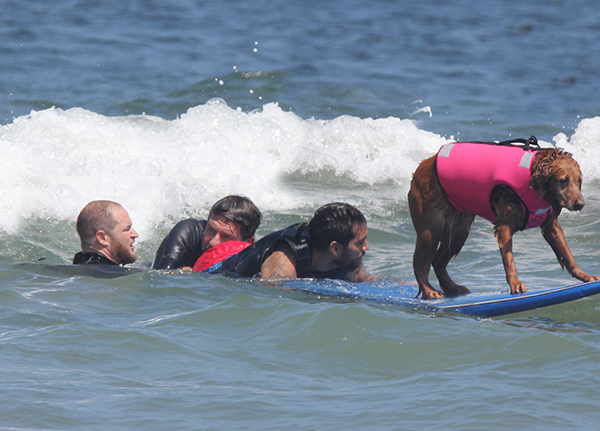 Here, Griff is helping his brother in arms, Jose surf with Ricochet.

Griff is also involved in Ricochet’s Waves of Empowerment Program which pairs veterans and kids with special needs for a day of canine-assisted playing, swimming, surfing, and therapy… taking them from the battleground to the playground! This program enables veterans to find new purpose by engaging in community service while mentoring and inspiring future generations. 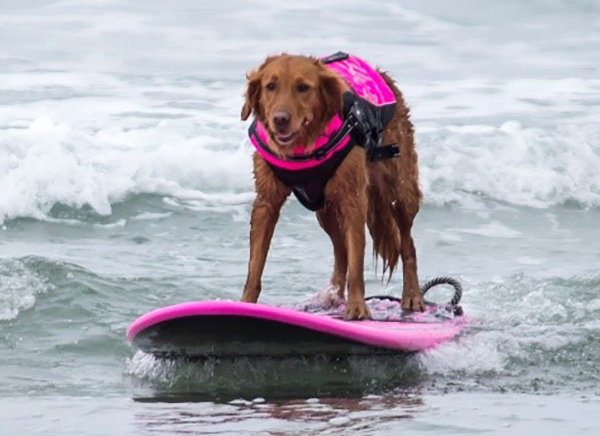 Ricochet is a champion surf dog. But, more importantly, she became the first-ever canine-assisted surf therapy and adaptive surfing dog in 2009 when she made a decision to jump on the surfboard of a 14-year-old adaptive surfer. Since then, she’s assisted hundreds and hundreds of kids with special needs, people with disabilities and wounded warriors. She balances boards… and lives! 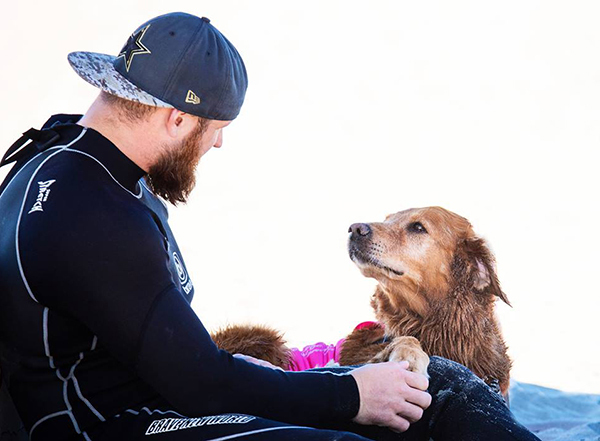 She’s also a certified goal-directed therapy dog that has been providing paws-on healing to service members and veterans with PTSD for the last eight years. She makes immediate soul-to-soul connections, assumes responsibility for their well-being and alerts/responds to anxiety, pain, emotions, and triggers. The connection she makes with people defies present-day scientific understanding! 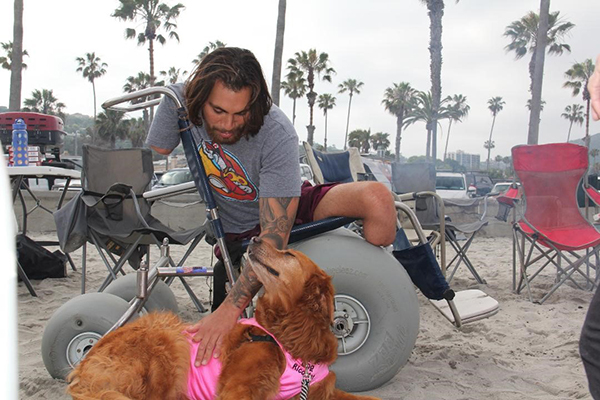 Ricochet’s guardian, Judy Fridono believes all dogs have these healing powers. Unfortunately, we often misinterpret their cues as bad behavior. In doing so, we miss the magic every dog is capable of. Her wish is that others will gain a better understanding of the sentience of dogs, and how they are always communicating with us… we just have to listen.

Find out how you can unleash your dog’s healing power at https://www.surfdogricochet and click on “healing dogs”. 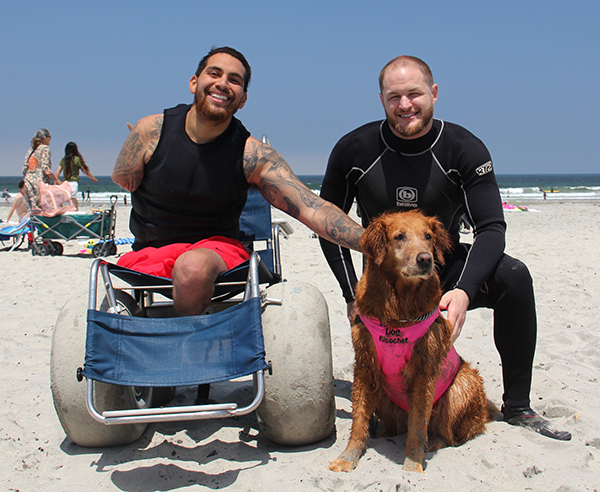 Ricochet, Griff & Jose invite you to get on board with them by sharing this pictorial and video. Please help Jose inspire more people with his resilience and astonishing feats, help Griff shed more light on our military war heroes who are suffering in silence, and help Ricochet bark about human-animal intervention and the healing power of dogs. You will be changing and saving lives!

Do you believe in the amazing healing power of animals?

Do you have the assistance of a therapy or service animal?

Had you heard of Surf Dog Richochet before this article?