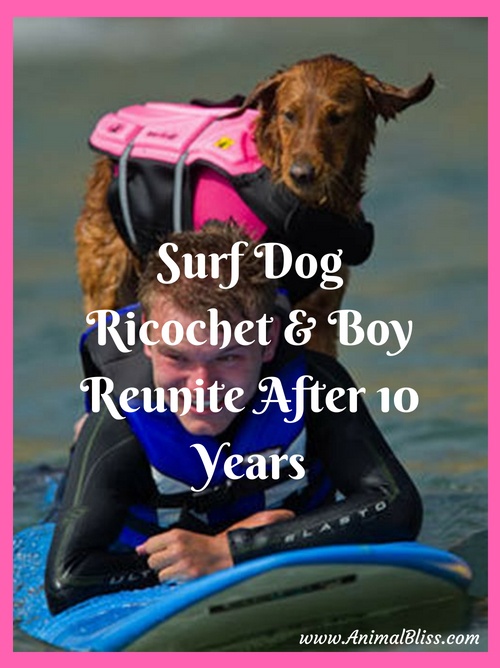 The history-making Surf Dog Ricochet and Patrick Ivison, a quadriplegic surfer, re-visit their iconic surf session that made history ten years ago and still inspires millions.

Ricochet and Patrick reunited for a celebratory surf session at La Jolla Shores in San Diego, California, on Sunday, August 19th. They caught the waves to commemorate a decade of unmatched triumphs.

Several supporters from around the country finally got to meet Ricochet and Patrick, and, best of all, they got to remove a line item from their bucket list, “Surf with Ricochet.”

Surf Dog Ricochet pioneered the concept of kids surfing with dogs as a form of assistance, healing, therapy, and empowerment when, on August 20th, 2009, she made an independent decision to jump on Ivison’s board. Something like that had never happened before, and history was made. The video went viral, with more than 12 million views on Facebook and YouTube.

“I will remember that day at the beach forever,” says Patrick.

“Ricochet and I caught a few waves side by side, and then she decided she wanted to ride with me. When she hopped on my back, it was a magical experience. We were in sync and could keep the board stable by helping each other. It was crazy and amazing. The fundraiser Ricochet held for me secured enough money to give me intense physical therapy through high school and the independence I gained in that time is incalculable.”

Patrick has since graduated from the University of South California (USC). He lives and works in Los Angelos, has a girlfriend, an apartment, friends, and the confidence and independence to live a full and “normal” life. Patrick says,

“I can trace everything in my life back to surfing with Ricochet and that first fundraiser. I’ve loved watching other kids get involved, and I love seeing their faces as they surf with Ricochet. I know that she is changing their lives as much as she changed mine.”

Since that day in 2009, Ricochet has continually added to her global ruff’sume in size, scale, and depth of programs. She went from service dog to SURFice dog® while providing canine-assisted surfing and other activities to empower, enhance, and improve the quality of life for individuals with physical, cognitive or emotional disabilities.

RELATED:
5 Impressive Services Dogs Can Do That You May Not Know

Ricochet is a registered and certified goal-directed therapy dog, and holds the highest AKC title of Therapy Dog Distinguished. She was one of the original southern California surfing dogs that started on the competition circuit. Ricochet typically won first, second, or third place until she stopped competing to focus exclusively on her canine-assisted surfing.

Surf Dog Ricochet has surfed with hundreds of kids with special needs, people with disabilities, and wounded warriors and veterans with PTSD. She is affiliated with scores of organizations, and she has raised more than a half-million dollars for over 250 human and animal-related causes. She published a book, was cast for an IMAX movie, and much, much more.

“For the past decade, Ricochet has balanced boards and people’s lives. She has offered individuals something no one else could – her incredible gift of healing, no matter the person’s challenge, disability or angst.” As I look ahead, I see her legacy as one that continues through every dog on this planet. I have learned an exponential amount about the healing power of dogs through Ricochet, and it’s my privilege to share it with other dog owners so they can unleash their dog’s healing power too.”

Ricochet’s efforts have resulted in her being named ASPCA Dog of the Year, receiving the American Humane Association Hero Dog Award and the prestigious AKC Award for Canine Excellence. She has also been inducted into two surf dog halls of fame, and the California Veterinary Medical Association’s animal hall of fame.

Additional photos and video clips are available upon request.