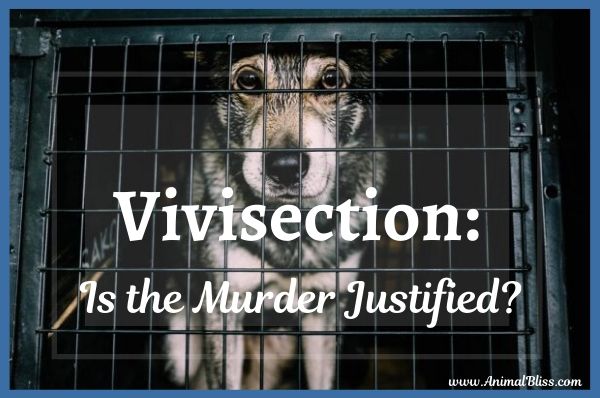 Many people nowadays, including doctors and scientists, are questioning the killing and suffering of animals for the sake of human beings.

The issue of killing animals for the use of education, biomedical research, and cosmetics is commonly referred to as “vivisection.”

Each year, nearly 26 million animals are used for commercial and scientific testing in the US. They are used as a means of developing medical treatments, determining the safety and toxicity of products and medications designed for human use, and a variety of different health care, biomedical, and commercial uses.

Although vivisection serves as a tool for experts to work in research, is the murder justified? While it may benefit human beings, the harms tend to outweigh the benefits.

The Violation of Animal Rights

Animals deserve respectful treatment, just as we do.

Humans and animals are related in so many ways. For example, they both think, behave, and feel pain. Therefore, we must treat animals with the same level of respect. But when we use them for drug testing and other research purposes, we’re violating their basic rights since they aren’t given any choice.

No animal willingly sacrifices itself for the betterment of human health or advancement in new technology. We make their decisions for them as they simply cannot express their emotions or preferences in words as we do.

Regardless of what vivisection brings to benefit humans, it should be terminated, as it violates basic animal rights.

Animal experimentation wastes both animal and human lives, as well as precious resources, by trying to infect them with diseases they’d never normally contract.

“Every key medical breakthrough is attributable to vivisection.”

That statement is wrong on so many levels.

Research shows that 90% of NIH animal experiments are going pretty much nowhere.

The majority of experiments performed on animals aren’t relevant to human welfare. They don’t contribute meaningfully toward medical advancements. Many of them are undertaken out of sheer curiosity and don’t even hold promise when it comes to curing illnesses.

The only possible reason we’re still under the impression that animal experiments are “okay” is due to experimenters, universities, and media misrepresenting the potential vivisection has in terms of developing new cures.

It Is Absolutely Not Necessary

The world doesn’t need another hand soap, eyeliner, food ingredient, pesticide, or erectile dysfunction drug so bad that it should come at the cost of animal lives.

During a government meeting concerning funding for research, Dr. Elias Zerhouni, the former NIH director, admitted that animal experimentation to serve people has been nothing but a massive failure.

Today—due to vivisection being cruel, costly, and generally irrelevant to humans—many scientists have started using alternatives to test products and study diseases. These alternative methods of vivisection include advanced tests using computer-modeling techniques, human cells, and studies among human volunteers.

Also, a wide range of advanced computer models was developed to simulate the progression of emerging diseases.

According to studies, these models can predict the ways new drugs will react in the human body more accurately.

Vivisection is not the answer to everything.

Poisoning, burning, shocking, and killing animals is what vivisection represents. If these cruel acts were performed outside laboratories, they’d be felonies.

It is the animals who suffer and die in laboratories with little to no protection from cruelty.

We want to see an end to vivisection in the name of science. A more sophisticated, humane approach is needed.

“Vivisection: Is the Murder of Animals Justified?”

Guest Writer: Kathrin Garner is an enthusiastic journalist and writes articles on social issues. As an activist, she takes part in the NCSM program, which is a discussion platform on relevant cannabis topics. She searches for current issues and writes about it to a wide range of readers.

What are your thoughts on vivisection? Do you see it as cruelty and murder of animals?

1 thought on “Vivisection: Is the Murder of Animals Justified?”