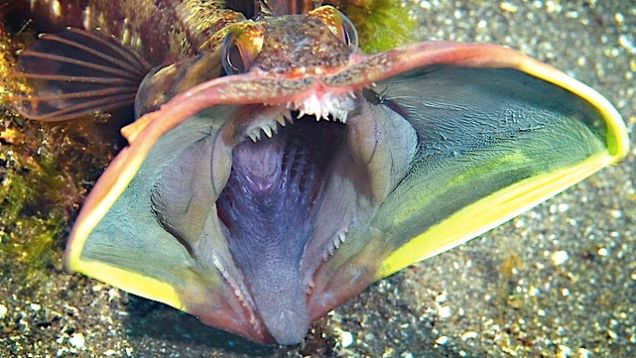 That is the question. So, just what IS a sarcastic fringehead? Is it a saucy brat with big hair? Or some smart-alecky whippersnapper with a fringed hat, knit by grandma? Of course not. I write about animals, remember? Got a clue? Well …

THIS is a Sarcastic Fringehead

The Sarcastic Fringehead, Neoclinus blanchardi, is a small, but mighty, ferocious fish.  This fish is extremely  territorial and will put up an aggressive fight to maintain its domain.  When two sarcastic fringeheads have a territorial battle, they wrestle by pressing their distended mouths against each other, each trying to push the other one away. The one who wins, which is usually the larger fish, establishes dominance. End of story.

The scaleless sarcastic fringehead can grow up to about 12 inches (30 cm) long, but most only reach 3-8 inches (7.6-29 cm).  They hide inside anything they can find in the ocean. It could be an empty shell, inside crevices, and even dumped bottles or cans that humans so thoughtlessly throw into our oceans! They’re not fussy about their home, but they’ll fight for the privilege of having it. The image below is one living inside some sort of plastic tubing. 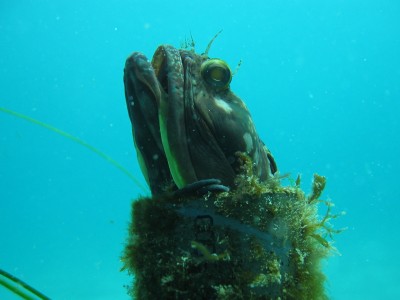 Sarcastic fringeheads are long, lean, and lanky. Their long dorsal fin extends from the rear of the head almost to the rounded caudal fin. The head is quite large, rounded snouts and prominent lips. The huge jaw extends back well past the eye and is larger in males than females. (Huh!)  These fish have sharp, needle-like teeth and have a fringe-like appendages over their eyes, called cirri. Hence the name.

A fish and an octopus! I say thumbs up for the octupus! He sure stood up for himself and didn’t back down. But he did run away the moment he got the chance! I can’t say I blame him.

t’s interesting to note that to enter their shelter, they back into it, instead of entering it head-first, perhaps because they can’t turn around inside such close quarters.

Their coloring is usually gray or brown, sometimes with a red tinge and green or pale blotches. Males can be almost black with the rear side of their huge jaw a bright yellow. Usually there are pale spots or patches on the cheeks. The ocelli (eye-like spots) on the spinous dorsal fin of males are metallic blue, surrounded by a golden ring.

Sarcastic fringeheads are believed to live to about 6 years. 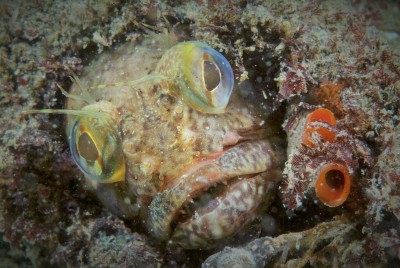 Where do they live?

They are found in the Pacific, off the coast of North America, from San Francisco, California, to central Baja California at a depth in the range of from 9.8 to 239.5 feet (3 to 73 meters). That’s quite a range, actually.

How do they fight?

These fish appear to have no fear, willing to attack any intruder that dares to come within their sight. They lay in wait, and attack at the right moment, surprising their opponent with their fierceness.

Aquarium of the Pacific describes their attack this way:

With only a bizarre-appearing head protruding from the shelter, an enormous mouth, and needle-like teeth, they are ready to aggressively defend their territory against all intruders. They are known to attack almost anything (including divers)that appears anywhere within their range of vision. They show who’s boss with an intimidating, animated threat display complete with body and head flexing, spreading gill covers, and snapping jaws. If the threat does not solve the problem, it is usually followed by a vicious, gaping-mouth attack on the intruder and a hot pursuit. 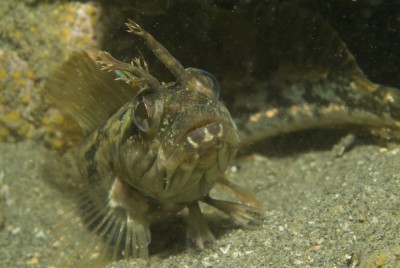 What is their status?

Most likely due to the fact that this little fish can pretty much take care of itself, they are not included on the IUCN Red List.

Why are they “Sarcastic?”

13 thoughts on “What is a Sarcastic Fringehead? Can you guess?”