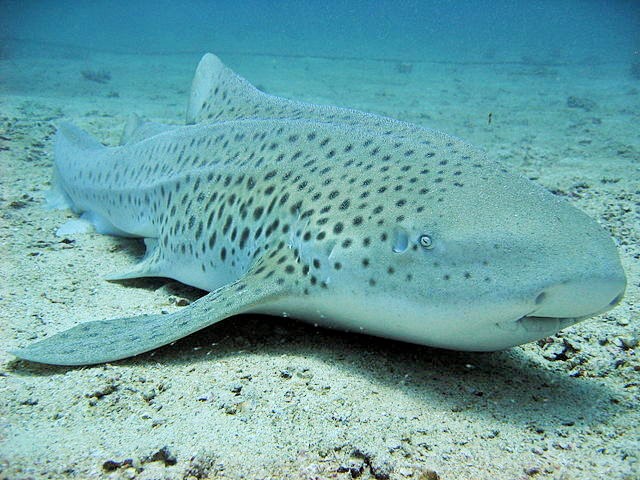 Z is for Zebra Shark Facts

The zebra shark (Stegostoma fasciatum) is a species of bottom-dwelling shark and the sole member of the family Stegostomatidae. It is found throughout the tropical waters of the Indo-Pacific, from South Africa to the Red Sea and the Persian Gulf (including Madagascar and the Maldives), to India and Southeast Asia (including Indonesia, the Philippines, and Palau), northward to Taiwan and Japan, eastward to New Caledonia and Tonga, and southward to northern Australia.

Zebra sharks are not dangerous to humans and can be easily approached underwater. However, they have bitten divers who pull on their tails or attempt to ride them. They are popular attractions for ecotourist divers in the Red Sea, off the Maldives, off Thailand’s Phuket and Phi Phi islands, on the Great Barrier Reef, and elsewhere. Many zebra sharks at diving sites have become accustomed to the presence of humans, taking food from divers’ hands and allowing themselves to be touched. The zebra shark adapts well to captivity and is displayed by a number of public aquaria around the world. The small, attractively colored young also find their way into the hands of private hobbyists, though this species grows far too large for the home aquarium.  (Wiki)

The World Conservation Union has assessed this species as Vulnerable worldwide, as it is taken by commercial fisheries across most of its range (except off Australia) for meat, fins, and liver oil. There is evidence that its numbers are dwindling.

Sources for Z is for Zebra Shark Facts:  Wikipedia

On a scale of 1 to 10, with 10 being highest, how much did you enjoy reading “Zebra Shark Facts” today?

12 thoughts on “Z is for Zebra Shark Facts : A-Z Collection of Cool Animals”