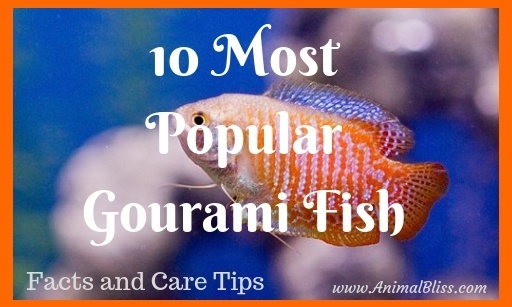 Gourami fish are one of the favorite freshwater fish for the beginner and experienced aquarists alike. They are known for their incredible colors and easy-going temperaments.

Interested in keeping Gourami? This complete guide features 10 of the most popular Gourami species – along with a few facts and care tips!

The dwarf gourami isn’t the most social of fish, usually demonstrating a calm personality and can tend to shy away from others unless those others are also dwarf gouramis.  Dwarf gouramis prefer quiet locations and the company of small fish that are not too aggressive.  Males of this species will grow larger than females and will display more vibrantly colored scales. They take well to flake food, but they will also eat freeze-dried or frozen food, and they will eat vegetable tablets, as well.  Supplementing the gourami’s diet with occasional live food feedings (worms) will ensure that they remain in good health.

This gourami breed is widely regarded as both the prettiest fish and the fish that requires the least maintenance.  The pearl and brown flecks scattered across its scales are where it gets its name, though they also have a black stripe that runs from mouth to tail with a spot at the end.  Pearl gouramis have pretty mellow temperaments and thrive in tank communities, apart from certain specific circumstances where males can become slightly aggressive. The best arrangement for keeping these fish with others is to pair them with fish of generally the same size and temperament, and if you’re pairing several of these gouramis together, you’ll get the best cohabitation with a group that includes one male and several females.

Another species of fairly peaceful fish, the honey gourami can appear bland upon purchase, but with the proper care in a comfortable setting, their colors will start to blossom.  This variety of gourami tends to be very playful and can bore easily, meaning they thrive in busy tanks where they can encounter other fish of the same temperament and plenty of plants and decorations.  They require a similar diet to that of the dwarf gourami, and it’s also important to keep in mind that gouramis are labyrinth fish, so remember to leave some room between the top of the water and the hood of their tank where they can get plenty of air.

This variety of fish isn’t the most common to see in home aquariums, but it isn’t a particularly demanding fish when it comes to caring for it.  It’s a calm and collected fish that prefers living in diverse environments of plants and other species of fish, though this can cause problems at feeding time, as this passive fish will end up being the last to get food.  Any small, peaceful fish species like guppies or some other types of gourami may make the best tankmates for these fish.  Not too much light and not too much open space in your tank, or the fish will begin to lose its coloration.

The chocolate gourami can be a bit demanding when it comes to their care, so this is the fish for owners who are up for a challenge.  As with most other gouramis, their nature is fairly gentle, not particularly social, but they require slightly more specific care than many other gourami varieties. Their water should be soft and kept fairly dark with plenty of plants. To mimic conditions of their natural habitat, their water should be treated with peat extract or filtered through peat with a gentle sponge filter.  Their water should be changed often, but only small portions at a time to avoid any extreme shifts in water chemistry.  Pay careful attention to cleanliness to keep these fish parasite-free.  These gouramis tend to pair best with their own kind so that they won’t risk clashing with fish of different size or temperament.

Named for their pronounced lips and what appears to be kissing behavior between challenging males, kissing gouramis are a fairly popular breed.  Some appear pinkish, others more silver-green, and others a sort of mottled mixture.  As a larger variety of gourami, kissers should be kept with other mid-size fish, and their behavior towards their tank mates should be carefully observed since they’re known to become quarrelsome at times and to bully other fish and may require separation. Their diets should be similar to those of other gouramis, though spirulina-based foods should also feature in their meals and fresh veggies when possible. Keep plenty of air at the top of the tank for them to breath from, as with most other gourami types.

The blue gourami is characterized by two blue spots in the center of the body and towards the tail.  If these spots appear to fade, your fish may be seriously stressed, likely because of overcrowding or bad water conditions, so keep an eye out for any drastic changes in coloration.  This variety has been known to become a bit territorial and should be paired with fish similar in size to itself to avoid clashing.  As young fish, they don’t require too much space, but as they grow, their tanks will need to grow with them.  Their diets are easy enough, as they’ll eat much of the same foods as other gourami species, and are valued for their ability to eat hydra so ravenously that they’ll clear the tank of the pest completely.  Keeping the tank well-filtered should be a priority and adding air stones to keep oxygenation good is a common practice.

The small, silvery-green scales of this fish are what earned it the name “Moonlight” gourami. They are generally a peaceful fish and require a few solid hiding places in their habitats where the least aggressive fish can wait out any aggressive behavior from the others.  If you plan to pair them with other species, make sure you don’t choose anything known to nip at fins, since there are long filaments that stream from this gourami’s fins. These fish welcome a wide variety of foods, and including both flake food and some live food will keep them quite healthy. Just make sure that if you’ve paired your gourami with other large fish that the others aren’t scaring the moonlight gouramis away from the food (they’re pretty timid).

Paradise gouramis date all the way back to the mid-1800s as pets and are still thought to be one of the most glamorous specimens.  This variety of gourami does not share the shy temperament of many of its counterparts and should probably not be kept with too many tank mates. These fish enjoy living alone but can accept tank mates who are larger than they are and non-aggressive, as these gouramis prefer to be the dominant fish in the tank (especially males, and especially as they grow older).  Almost any water condition suits these highly adaptable fish just fine and can handle tank life or even life in a backyard pond.  Algae-based flake foods should be a dietary staple, and meaty foods should be included too, as well as small live foods from time to time.  Feedings once or twice a day will keep them healthy and strong.

This variety of gourami resembles its calm and peaceful related species significantly, only becoming aggressive during spawning.  They can be kept in community tanks, best suited to groups of other gourami made up of a male and a few females.  Flake foods are acceptable to them, though they do enjoy a live feeding every so often.  These fish, like a few other gourami varieties, occasionally “croak,” which can be heard from outside their tank, so don’t be alarmed by any other noises they might make. They enjoy tanks with many plants and a good amount of open space to swim in.